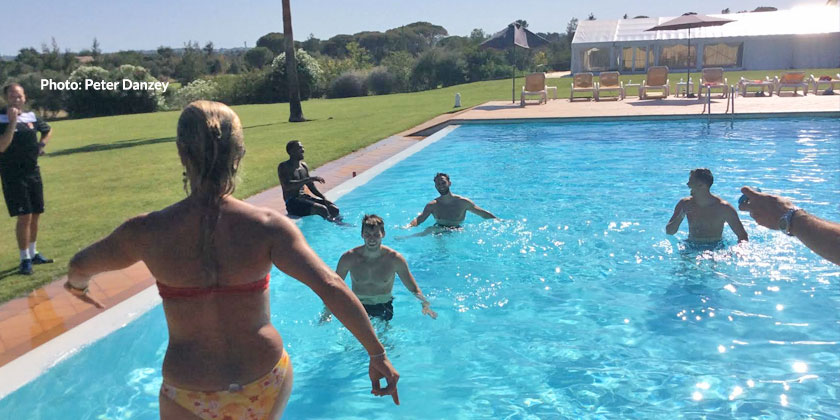 Continuing his despatches from the front line, Peter Danzey punctuated his time in the pool with gathering news of the squad’s Sunday in the sun. And it was another day of hard work, the old saying of “putting in a good shift” never more accurate than with the players’ latest runout. Their first training session was at 9am, followed by 30 minutes in the gym, with players split into two groups to stagger their workout times either side of lunch.

There was then time for some afternoon poolside relaxation and a swim, before physio Jamie Crosswell put the boys through their paces with some swimming exercises. Well, at least until a somewhat over-enthusiastic holidaymaker rather stole the show from our physio and led Charlie Sheringham, Aiden Palmer, Dean Rance and Lloyd Harrington through her own rather off-the-cuff routine (see photo). After that unexpected interlude, another training session followed at 5pm, all in temperatures of 32°C and upwards.

Peter Varney, together with Peter and Maggie Danzey, are keeping things ticking over with trips to the local supermarket for essential tea and milk supplies so that the players are able to enjoy a cuppa each morning from their standard-issue ‘True Gritt’ club shop mugs.

After dinner, a quiz night was held to maintain the team-bonding theme, with most of the banter heading in the direction of Anthony Acheampong who was unable to answer a fairly run-of-the-mill query about his former manager Edgar Davids. At least Charlie Sheringham got his one right about some fella called Teddy.

And having earned a walkover against the vice chairman at tennis, Stacy Long maintained his winning streak, scooping €140 in prize money as his ‘Borrowers’ team of Tom Bonner, Sean Shields, Charlie Sheringham, Brandon Hall, Jonathan Miles and Lloyd Harrington triumphed in the knowledge stakes.

Coming a close second were ‘Growing Old Gracefully’ (you can probably guess that team, but for the record… Steve Gritt, Daryl McMahon, Dave Jupp, Ron Hillyard, Peter and Maggie Danzey).

Having topped up his suntan, there was only one place for Peter Varney and that was in the Bob Monkhouse role of quizmaster with absolutely no suggestion at all that the two in any way resemble each other.

That’s all for now folks, more from newshound Danzey to follow.

Ed Miller has been Ebbsfleet United's communications manager and programme editor since 2014 and responsible for the club website since 2007. Contact him on ed.miller@eufc.co.uk
PrevPreviousFleet Trust away travel reminder
NextDanzey’s Diary: just another manic MondayNext