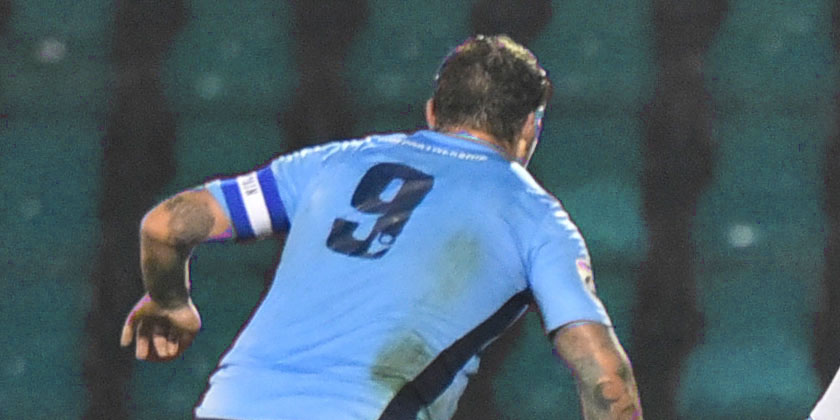 The last time Danny Kedwell scored twice in a match, he fired Fleet to the top of the table. Now, having notched a brace for the first time since the opening day of the season, the skipper has done it again, seeing his side overhaul Maidenhead United at the top of the league.

It was the former Gillingham striker’s seventh league goal of the season and sees him draw level with Darren McQueen and Jack Powell in terms of league goals, with Sean Shields and Sam Deering just behind them.

And Kedwell was naturally pleased to accept the goal return  for all the hard work he puts in across 90 minutes. “It’s been very difficult for me this year, doing all the hard work and not getting the goals,” he told BBC Radio Kent’s Charles Webster. “It gets to you a bit, so to score two goals today has hopefully put that little bit of pressure off me. I just carry on what I’m doing really. To be fair as long as we win I don’t care how many goals I get or whatever, as long as we win.”

After months trailing in Maidenhead’s wake, Fleet fans have been jubilant in finally closing the points gap but Kedwell echoed his manager’s caution with 10 or so weeks of the season remaining.

“We’ve got to go game by game, we know what happened last year so we’ve just got to be as strong as we have been in the last five or six weeks,” Kedwell said. “Defensively we’ve been magnificent and we’ve been taking our chances so it’s all coming together, we’ve just got to keep it going.

“The end of the season is [29th of] April and that’s the date we’ve got to hopefully be there celebrating but until then we’ve just got to concentrate on it game by game.”

And does the skipper share teammate Andy Drury’s confidence about lifting a trophy at the end of the season?

“If he says that, then definitely. He’s a funny character that boy! Listen, we can do it, we’ve got the quality, we’ve shown it in the last six weeks how good we can be. We’ve just got to be sure we maintain that and go again on the training ground on Monday. Last year we messed it up ourselves as players so this year we’re going to make sure we do it right. If we keep performing like that I can’t see why not.”

Ed Miller has been Ebbsfleet United's communications manager and programme editor since 2014 and responsible for the club website since 2007. Contact him on ed.miller@eufc.co.uk
PrevPreviousDavid Testa departs EUFC board
NextFleet inspired to hunger for moreNext