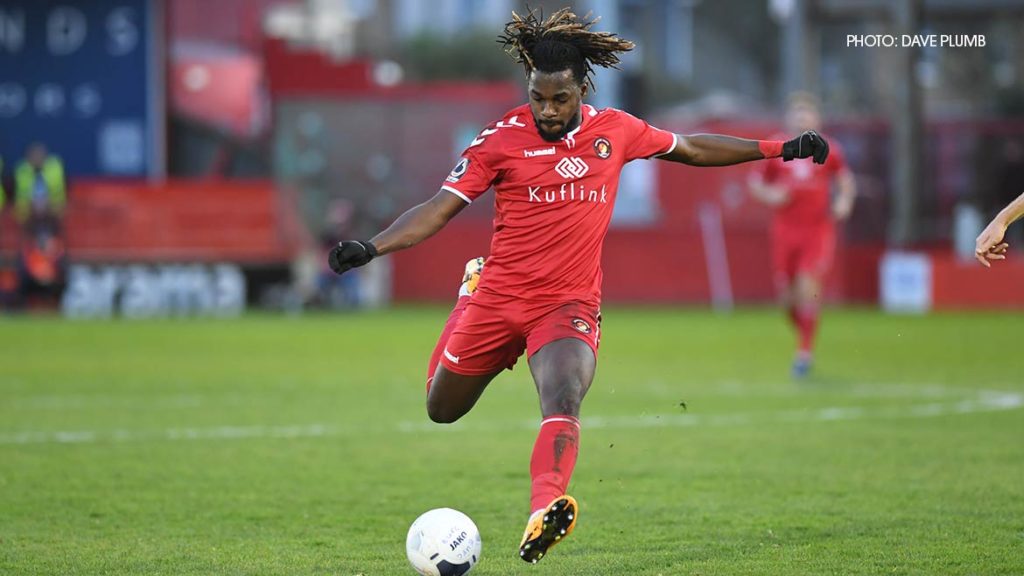 Postponement of Fleet’s pre-Christmas clash at home to Woking was certainly not ideal but Kevin Watson’s squad have had extra time to focus on the crucial Boxing Day meeting at Dagenham & Redbridge.

Four games in 11 days has now turned into three in six days, with the small matter of Watson’s first Kent derby in between the two battles north and south of the river.

“We won our last home game against Wrexham by hook or by crook and we followed it up at Enfield,” said Watson, “so we’re looking forward, we’re looking up and it’s all about winning games and winning breeds confidence.”

Fleet returned to the bottom of the table without playing on Saturday after a win for Chesterfield and a draw for Chorley. There were three points apiece for Aldershot Town and Sutton United as they look to build a gap to the bottom four, with only Wrexham coming away with nothing.

It was tough on Watson’s improving side to have no control over their own destiny last weekend but that’s certainly not the case once Christmas Day is over and done with.

And that’s Watson’s focus – on what his players can affect, not on what they can’t.

“Things can and do change but at the minute we as a squad are on an upward curve,” he said. “But we’re not out of the mire yet. We’re not mentioning the ‘R’ word and I don’t want anyone to mention it because I am confident we are only looking above us and that’s where I’m at.

“If we stop creating chances and stop scoring goals, I’d be a little bit concerned and if we kept shipping loads I’d be concerned but the last couple of games we’ve rectified that to an extent and long may it continue.”

“We beat Wrexham, probably should have won at Eastleigh, and Enfield we played well so we’re moving forward, we’re not stagnating and you’re never just going to close that gap over two or three games. But we are closing it and hopefully we can continue our decent form over Christmas”.

John Goddard is very near a return though Boxing Day may come too soon, while Alex Lawless looks set to miss the festive fixtures.

There is also a return to the Chigwell Construction Stadium for Tomi Adeloye (pictured above) who scored the Daggers’ only goal in the clubs’ last meeting but who’ll be targeting his former employers this time around.

Dagenham go into these games on a poor run, although an extra-time replay victory over Sutton in the FA Trophy was some welcome respite from the league. The Daggers have played 210 more minutes of football than the Fleet over the past week and made the long journey south from Hartlepool last Saturday with nothing to show for their efforts.

Peter Taylor’s side are now just three places and four points from the drop zone, having climbed as high as fifth at one stage this season. They were in Fleet’s position last season before investment from their American owners began a rise in form.

This season, however, much more was expected of the Daggers and they will be as keen for the points as the Fleet over this two-game meeting. Taylor’s squad, of course, includes former Fleet players Kenny Clark plus Bagasan Graham and a third added recently with the signing of Sam Deering from Billericay Town.

Deering, however, has been injured since starring in Dagenham’s only bright spot in recent weeks, a 6-1 home win over Aldershot. The Essex side are also without top scorer Angelo Balanta and a couple of others, though they have welcomed back defender Manny Onariase and Reading loanee striker Ben House over the past fortnight.

Ex-Dover midfielder Mitch Brundle is the man to keep them ticking over in the middle and, without Balanta leading the lines, the midfielder’s three goals make him one of the likelier sources for scoring. Ex-Maidstone striker Joe Quigley has five and former Bromley man Joan Luque also has three to his name.

Tickets for the Dagenham visit can be bought online here. And don’t forget it’s a 1pm kick-off!

Ed Miller has been Ebbsfleet United's communications manager and programme editor since 2014 and responsible for the club website since 2007. Contact him on ed.miller@eufc.co.uk
PrevPreviousDebut win for Over 60s
NextDagenham & Redbridge 1-1 FleetNext