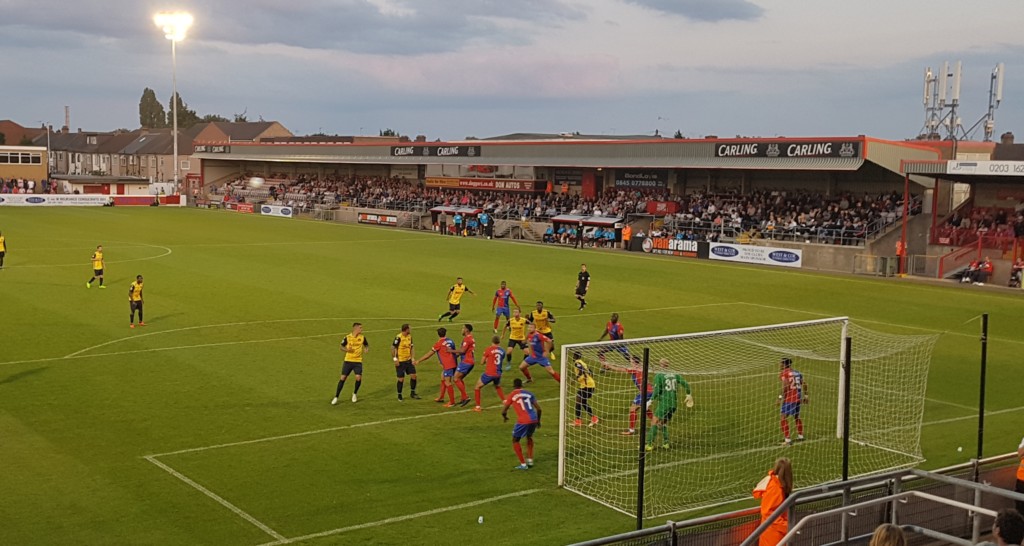 A Tuesday night in Dagenham might not sound like the most fun you can have, but Ebbsfleet United certainly disproved that theory as another comeback, another gutsy 3-3 draw, preserved an unbeaten run now stretching to 27 games against one of the title favourites.

At 2-0 down going into the break and then trailing 3-1 later in the second half, few would have given the Fleet a prayer of gaining a point from this one, but goals from Jack Powell, Luke Coulson and Danny Kedwell were simply the headliners on a night of action, angst and amazement.

And all this without two of their two first-choice defenders, as Kenny Clark was rested following a hamstring problem and that meant Yado Mambo started his first league game for the Fleet since playing against Oxford City back in December 2016.

Not that the defence was troubled too much early on as Fleet really took the game to the Daggers in the opening spell, Myles Weston seeing plenty of the ball down the right side and Kedwell involved in winning plenty of aerial balls ahead of the home centre halves.

Coulson had an early effort blocked from 12 yards and Darren McQueen saw another hit a Dagenham leg all inside the first five minutes as the home side started timidly. Weston got the first ball on target, lifting a shot over Bondz N’Gala that was easy enough for goalkeeper Mark Cousins. The Daggers began to up their involvement from about 15 minutes, winning a couple of corners, but Nathan Ashmore dealt with those and the visitors continued to enjoy the upper hand in territorial terms until a goal hit them against the run of play.

It arrived on 22 minutes and was fashioned from half a chance as a neat pass found Daggers’ top scorer Corey Whitely on the right. He took no time at all to find his range and slotted an excellent low shot into the far bottom corner with Ashmore at full stretch. Fleet took a while to recover from that setback and could have been two behind when Bondz N’Gala was left space to meet a corner but Ashmore dived well to scoop it away from his goalline.

The visitors were soon back into their stride, however, and played some good-looking football in midfield, without quite troubling Cousins in the Daggers goal. Weston dropped a good cross onto the penalty spot on 31 minutes but it was just behind Kedwell who had raced into the six-yard box ahead of it.

And the last six minutes of the half were packed with incident. First Ashmore got across his goal brilliantly to tip Whitely’s free-kick over the upright. But his heroics came with the next incident when the referee awarded what seemed a soft penalty for a push by Marvin McCoy. Whitely struck it well enough to Ashmore’s right but the Fleet goalkeeper, in excellent form, judged it correctly and pushed it away.

Fleet should have been rewarded but instead they allowed Dagenham one more opportunity in the two minutes of added time. Sam Magri intervened well to divert a tricky dipping cross but from the resulting corner, former Maidstone defender Kevin Lokko got above the defence to hook a loose ball into the top of the goal and the home side were suddenly 2-0 up.

Both sides came out with purpose and Kedwell shot over on the turn while at the other end, Magri and Whitely had a ding-dong battle for the ball as Whitely powered through the Fleet middle and forced his way into the box.

That signalled the beginning of a spell of slick attacking football by John Still’s men and Morgan Ferrier in particular was unsettling the Fleet, while Jack Connors – on his return to his former club – saved his side with a great tackle from Michael Cheek in the six-yard box.

On 57 minutes, Fleet won a free-kick and with Powell preparing to come on, the substitution was understandably hastened by McMahon and the No.7 didn’t disappoint. In what must be the most rewarding substitution in Fleet history, Powell took up his position, struck a curling free-kick around the wall and just out of reach of Cousins to hand his side a lifeline.

Moments later, McQueen almost fashioned an immediate equaliser as he got goal side of N’Gala but found Luke Pennell and the goalkeeper in his way. It was an absorbing game that you couldn’t turn your attention from but Fleet looked dead and buried on 63 minutes when Dagenham restored their lead.

Having failed to clear their lines in defence from a high ball, it landed nicely for Ferrier wide on the left and he turned to position himself for an exquisite looping shot that bent over Ashmore and hit the back of the net.

That two-goal lead lasted just two minutes, however, when Fleet sent in a low ball from a free-kick on the byline, Coulson arrived to get a touch and the ball evaded Cousins to make it 3-2.

The away fans upped the noise level and suddenly belief coursed through their side. They howled for a red card when McQueen got the other side of Lokko and was hauled to the ground, but the referee – who didn’t win too many friends amongst the Kent travelling contingent – produced only a yellow. Powell fired another free-kick just wide via a deflection and then Jack Payne found room for a fine effort that clipped the post before Kedwell’s overhead kick produced another half-chance that Coulson blasted wide.

At the other end, Ferrier hit one just wide and then Daggers carved the Fleet open, Lokko getting a touch and Oliver Hawkins with a point-blank shot from eight yards that Ashmore fended off with an incredible reaction save.

It deserved to yield something for his side and his frontmen obliged. With 10 minutes left, a throw from the left wasn’t dealt with by the Dagenham defence as it bounced and it reached Kedwell who got his head to it to direct it into the gap between goalkeeper and post and send the far end of Fleet fans into a joyous outpouring.

His third goal in as many games wasn’t going to see Kedwell rest on his laurels and he got a foot to a ball in the other six-yard box as Dagenham surged back at the Fleet, looking for a winner. Mambo and Magri had to be on top form as the home side made one last-ditch assault, although Fleet were still looking to win it as well.

In five minutes of time added on, Hawkins turned and fell a yard or two from the Fleet box and Whitely lined up a very dangerous looking free-kick but to the relief of those behind the goal, he sent it soaring towards them.

That was the last act of a truly dramatic night as Fleet’s fighting spirit shone through – and no-one can say this league has been boring so far, with Fleet notching the joint highest goals for and against in the division.

Ed Miller has been Ebbsfleet United's communications manager and programme editor since 2014 and responsible for the club website since 2007. Contact him on ed.miller@eufc.co.uk
PrevPreviousA sharper Fleet set sights on Daggers
NextBusy Ashmore “just doing his job” againNext