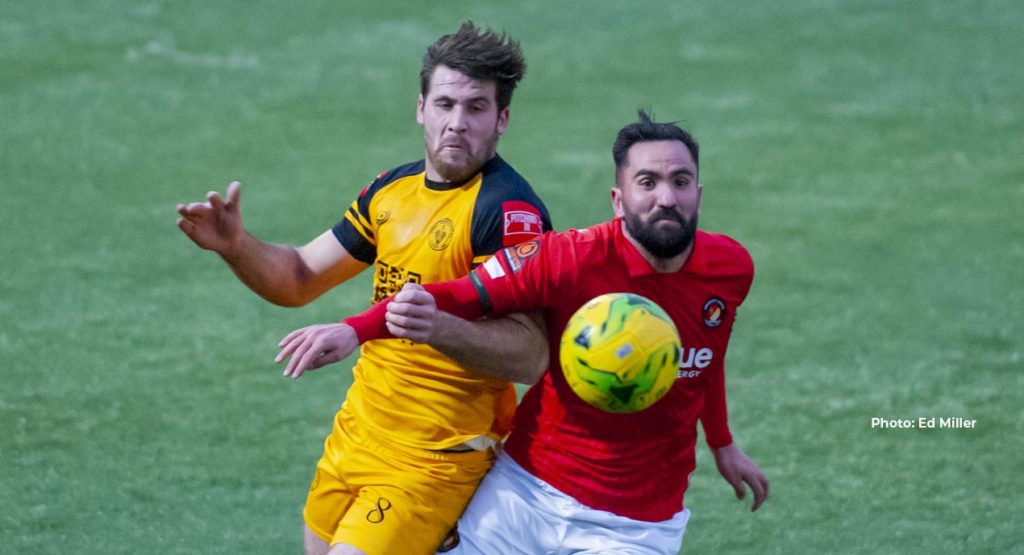 After a late late show in recovering from a 2-0 deficit, the Fleet couldn’t quite complete the comeback, bowing out of the Buildbase FA Trophy on penalties as Chris Dickson slotted home after Michael West sent his spot kick over the bar.

The visitors trailed to two first-half goals after having one of their own chalked off, but saw strikes from Rakish Bingham and then Will Wood on 90 minutes haul the scores level – taking the Fleet to a shootout in this round in successive seasons.

Fleet rang the changes from Tuesday night’s Kent derby against Maidstone, bringing in seven new faces, including Will Wood back from suspension and midfield pair Kreshnic Krasniqi and Kieran Monlouis.

Cray were restricted to four subs through injury, the ex-Fleet pair of Marvin McCoy and Andy Drury absent and manager Danny Kedwell naming himself amongst the replacements. And Anthony Cook succumbed to a hamstring issue and had to be content with sitting alongside his boss on the bench.

In freezing, windy and wet weather that deteriorated as the game progressed, neither side stamped authority on the game. Dickson fired over in the opening minutes, taking advantage over miscommunication between Tobi Adebayo-Rowling and Sefa Kahraman on the edge of the box while at the other end both West and Elliott Romain briefly got behind the Cray defence for runs on goalkeeper Jack Turner.

Chris Haigh, skipper for the day, made a routine save from Fjord Rogers’ strong run down the left before Romain touched a close-range header off the crossbar on 11 minutes from West’s corner, Turner able to grab hold of that as it bounced down.

With Jack Paxman busy but unable to unlock the back line, alongside him Monlouis enjoyed a little more space and drew a low save from Turner, one of several willing runs the midfielder made through the afternoon.

Fleet thought they’d gone ahead on 27 minutes when a searching diagonal ball into Wood was met and despatched by the No.16 but after initial confusion when it seemed the referee had awarded it, the home side had announced it and Fleet had marched back to their own half awaiting Cray’s restart, dialogue with the assistant saw the goal ruled out. Wood was the alleged culprit, adjudged to have handled the ball as he headed it home.

That seemed to work in Cray’s favour and they looked much livelier all of a sudden. Haigh pushed away Cameron Brodie’s effort and did the same with Rogers’ free-kick from the edge of the Fleet box on 35 minutes but the ball unfortunately sat up for the impressive Jamie Yila to fire in the rebound from six yards.

Yila needed no second bidding to extend that lead within three minutes. Daniel Uchechi’s ball through a gap down the Fleet left was eaten up by Yila who strode into the box past Kahraman and put a clinical shot beyond Haigh’s reach for 2-0.

The Fleet had little immediate answer to the sudden reversal of fortunes and when Romain was able to get on to Chapman’s blocked shot just before the break, Turner was on hand to save.

Dennis Kutrieb resisted the urge for changes immediately after half-time but Fleet lacked penetration as the game resumed. When they did threaten, such as Paxman’s mazy run along the edge of the box to find Wood, the resulting shot was high. Wood then met Adebayo-Rowling’s low delivery, attempting to steer an effort through a crowd of players but it took a deflection and was convenient for Turner to gather.

Fleet had already switched shape with Wood swapping sides and Chapman pushed back into defence to allow Adebayo-Rowling more forward freedom and another tactical switch came with Rakish Bingham and Craig Tanner’s introduction.

They helped the pace pick up a little but to their credit Cray continued to press when and where they could and Fleet had to be careful of throwing too many men forward. Monlouis’ surge midway through the half could have unlocked the Cray defence but for what appeared to be a sudden hamstring injury, the Fleet midfielder going from sprint to hobble in a flash as he pulled up and left the field.

Gradually, however, Fleet turned the screw. Substitute Alfie Egan earned two saves from Turner in quick succession, the first of them a solid effort after Romain had back-heeled into Egan’s path. And with 14 minutes left, Bingham edged ahead in the Fleet’s goalscoring charts to continue his rich vein of form, a good move seeing Egan feed Adebayo-Rowling to tee the ball up for the No.9 to run on to it and send a fine strike flying past Turner.

After 80 minutes of confident football, the last 10 saw Cray back off as Fleet lifted their game and the impetus in the final third. Romain’s turn and shot flew just wide of Turner’s post and Paxman had a promising run and free-kick thwarted by the goalkeeper.

But with the board preparing to show five minutes of additional time, Fleet got the equaliser. It came via another excellent run from Paxman whose ball was just behind the well-placed Romain. It seemed Cray would clear it but Wood rushed in to bury a shot for the goal he had deserved.

Egan might have troubled Turner again as the clock ticked down with Fleet in the ascendancy but having salvaged the game in the 90th minute, the visitors saw the penalty shootout get away from them. Bingham and Paxman exchanged goals with Cook and Rogers but with Cray leading 3-2, West sent his penalty high and although Chapman converted his, Dickson fired home the clincher to send the Wands into Round 3 for the first time in their history.

Ed Miller has been Ebbsfleet United's communications manager and programme editor since 2014 and responsible for the club website since 2007. Contact him on ed.miller@eufc.co.uk
PrevPreviousPreview: Cray in the way on Trophy trail
NextEnjoy 15% off this Black Friday weekend!Next