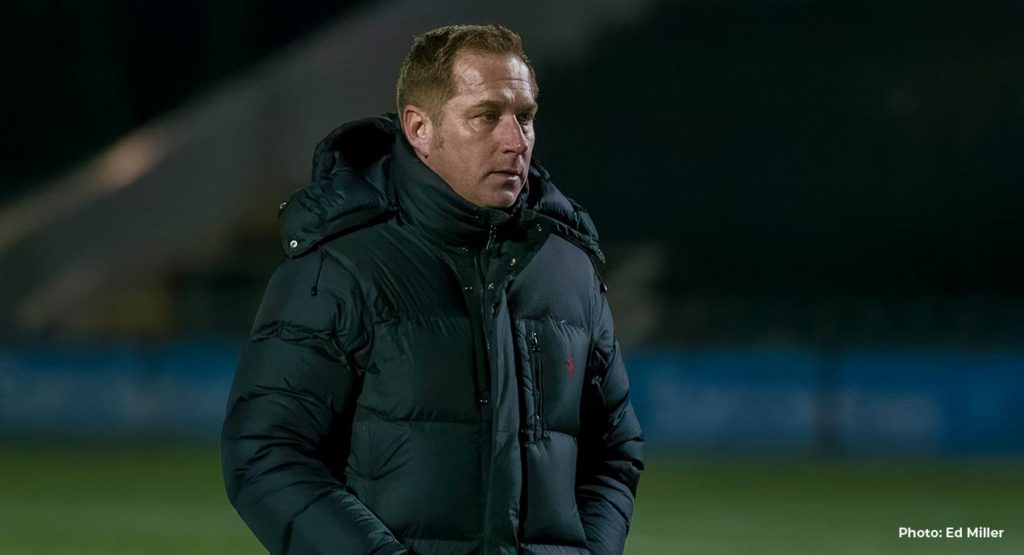 Fleet’s Wednesday win on penalties over Bromley in the Kent Senior Cup was a first in the competition for Dennis Kutrieb, though the manner of the victory was familiar – with the Fleet boss seeing a fifth cup tie in his tenure decided on spot-kicks.

“If you know the history with me and penalties here in this club, it can be better,” Kutrieb told BBC Radio Kent’s Charles Webster, with the manager’s record now three wins and two defeats in the proverbial ‘lottery’. “It can still improve. Normally [in Germany], I don’t know if I ever lost a penalty shootout before. But the luck was on our side: if you score your first five penalties, you normally win because one of the other [team’s] five don’t score. That’s a normal rule for me, so you need to make sure you score your first five pens. But anyway, we take it and we enjoy it because it’s a win. So we play Folkestone, it’s a nice cup, a first time for me. We’ll try to enjoy it, it gives us a lift for Saturday and then we go again against Eastbourne.

“That’s what the boys need, a kind of a lift, gaining confidence. I was happy because I saw many of our boys who were not involved here to support the others. That’s what I want to see as a manager, that the team is tight together and that’s what they showed today and what we have to do on Saturday as well.”

Fleet fans who travelled to Hayes Lane got to view something that hasn’t happened for a good seven or so years, with a team made of up of senior players participating in a Kent Senior Cup tie.

“It was not so much about the team performance,” said Kutrieb. “We could have done much better, but individual performances, there were a few good ones, a few ones where we definitely can be better and can improve and have to improve. There is a victory, so we take it even if it’s on penalties. So that’s a positive thing from the evening.”

There was praise for new signing Shaq Coulthirst who brought his tally to two goals in as many games with another good finish proving his eye for goal.

“It was a great finish,” said Kutrieb. “Very clinical and you can see he has the quality. If he has a sniff in the 18-yard box, if he gets the ball in there and he has a clear-cut chance, he takes the chance. That’s definitely one of the positive things during the last week and this week. It gives him more confidence and I guess that’s the main point for strikers.”

There was one concern for the boss, though, with the injury to Alfie Egan, who had only just entered the field of play as a second-half substitute.

“I’m really concerned at the moment, it’s what I don’t like to see,” said the Fleet boss. “I think it’s serious and he said he twisted his knee. He’s an important player for us – hopefully it’s not too bad. So we will see what it is and how bad it is. But at the end of the day, we need to get on with it like we have done with other injuries, like Marts back today, or Finney who was longtime injured and back again.”

Ed Miller has been Ebbsfleet United's communications manager and programme editor since 2014 and responsible for the club website since 2007. Contact him on ed.miller@eufc.co.uk
PrevPreviousF&F on board from the ground up
NextPreview: Eastbourne BoroughNext