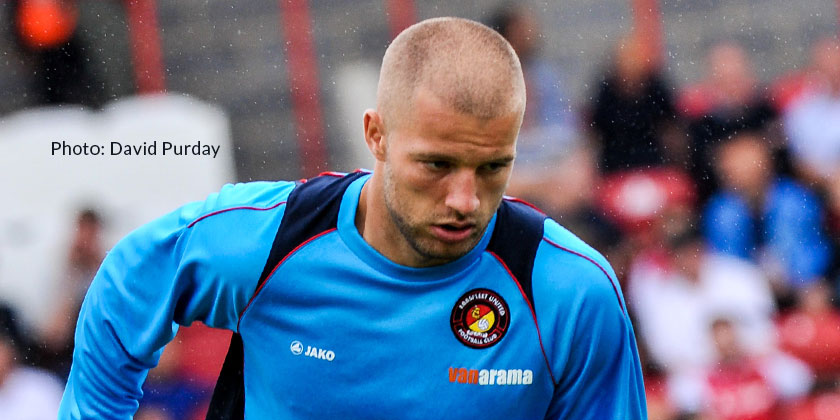 Coulson’s never gonna give up on the Fleet

With the squad travelling up to Yorkshire the night before Saturday’s match, it was the perfect time for the new recruits to sing up or pay up as they underwent their squad initiation. For Luke Coulson, the lure of the mic proved too much and he gave in to his inner crooner to belt out a tune for his teammates.

So just what does the former Barnet man have in his songbook?

“I brought out a bit of Rick Astley, Never Gonna Give You Up,” he admitted.

Pressed by BBC Radio Kent’s Charles Webster to give us a burst on air, the Fleet midfielder claimed he needed a little more coaxing; “You’ve got to bring it out of me… you’ve got to seduce me a little first!” he said. But with such an admission, it could be the signature song for fans on the terraces when Coulson finds the net for the first time!

As it was, the 23-year-old did everything but score at Guiseley, setting up both goals for Darren McQueen. “It was great play [for the first goal],” Coulson said. “I got a nice little one-two I think with Powelly and he slid me in down the line and then I know the players we’ve got they’re going to be flooding the box and getting in the right areas so it’s a simple case of me putting it in the right area. On a personal note it was great to set up the equalising goal and I think we literally got better and better as the game went on.”

The second goal came from further downfield, with Coulson having to manoeuvre his way out of trouble in defence, which made the resulting ball over the top to McQueen even more special. “Under pressure for the second goal, I know straight away that Darren’s going to beat any defender with a run in behind,” he explained, “so it’s just about putting the ball in the right area for him and sometimes it works.”

Like his manager, Coulson felt the Fleet were always going to have a say in the end result, despite being a goal down at the break. “It’s mixed emotions after being down 1-0 at half-time,” he said. “I think we showed great character and belief to come back in the second-half and get into the winning position and that’s what the gaffer wanted. He wanted a reaction and us to carry on playing the way we were. I thought we were the better team so there was disappointment to concede and take a 2-2 draw but being the team that’s come up from the league below, to be disappointed with a draw on the opening game shows how much we believe in ourselves and what we can do this year.

“Some of the movement and play we put together was outstanding. I thought we were good first-half and even better second-half and 2-2 compliments them a little bit.”

Coulson, who played against Maidstone in a pre-season friendly for Barnet, will get his first taste of a Kent derby on Tuesday when the Stones come visiting and he says the Fleet squad are in the zone for what will surely be a compelling 90 minutes. “The gaffer’s already spoken about it,” he said. “The team talk after the end of the game was now, after playing like that, we take it into Tuesday night. We know how important it is for the fans and for us and it will be great to set a marker at home especially. Four points from the first two games would be a great start.”

Ed Miller has been Ebbsfleet United's communications manager and programme editor since 2014 and responsible for the club website since 2007. Contact him on ed.miller@eufc.co.uk
PrevPreviousMacca hails outstanding Fleet after day one
NextGet a Fit-Bit for a fitter EbbsfleetNext