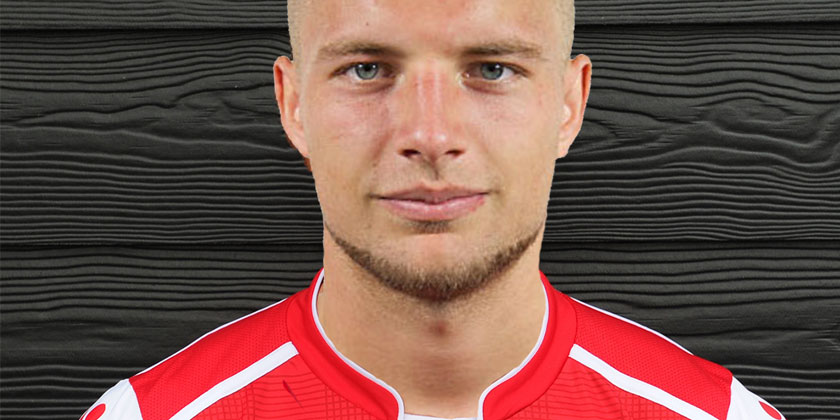 Ebbsfleet United goalscorer Luke Coulson has spoken of his admiration for the club in his first two days after signing, meeting his new teammates and then going on to land the man of the match award v Tottenham.

Coulson, 23, signed from Barnet on Thursday morning and his first impressions are good. “The pitch and stadium, how professional the setup is… my first two days I was so impressed with everything and it’s a very close bunch of lads,” he told Oliver Turner and Charles Webster for BBC Radio Kent. “Obviously you have to take a step by step approach but I’ve played in the Conference with Eastleigh and there’s no reason we can’t have a great campaign and look up.”

The ex-Eastleigh midfielder tapped up his former teammate for the inside info on the club and the feedback was positive. “Speaking with Andy Drury, he spoke so highly of the club, that was a massive pull for me,” Coulson said. “So once I had all the information, it was a pretty obvious decision.”

Having started pre-season with Barnet and been given a squad number, Coulson’s change of direction in midsummer is one he’s determined to make a success of. “This is my fourth club in about three years,” he explained. “That’s not out of wanting to move or unsettling teams, just to clarify with the fans! It was just a case of people wanting me and it seeming like a good decision. But with the ambitious manager and how good the squad is, which I think we showcased today, I definitely think we can go a long way and I want to be part of that.”

His Barnet experience, he’ll be the first to admit, did not go quite according to plan but Coulson is determined to get back on track at Stonebridge Road. “I didn’t really have the chance to showcase my quality, I was a little bit disappointed by that but [Barnet] told me their plans for the upcoming season and were very straight up front and honest. I’m thankful to them for allowing the move to go through as well as it did.”

Daryl McMahon has made no secret of the fact that this season, he’s been able to recruit players with adaptability and Coulson, who can play wide, in the centre or at full-back, fits the bill. But where does the player himself think his expertise lies?

“For 10 years with Man City and Cardiff I played at right back,” he said. “And then when I went to the States and dropped down to Oxford City, I started playing in centre midfield and out wide and I feel like in the midfield that’s definitely my best position. I feel like I’m a very technical player with pace and power to go forward. The gaffer’s already spoken to me and he knows I’ve played at numerous clubs at right back and I can fill in there if the team needs it. But in all honesty if I’m on the pitch and I can help the team, that’s all that matters. If I’m in midfield, then great. If I have to go to right back to help the team out in the last 10 minutes, so be it.”

Luke’s 10-minute interview, including a revealing account of life as a Premier League youngster as told to Kent Messenger’s Steve Tervet, can be heard below.

Ed Miller has been Ebbsfleet United's communications manager and programme editor since 2014 and responsible for the club website since 2007. Contact him on ed.miller@eufc.co.uk
PrevPreviousFleet 3-1 Tottenham Hotspur
NextAcademy issues trials dateNext