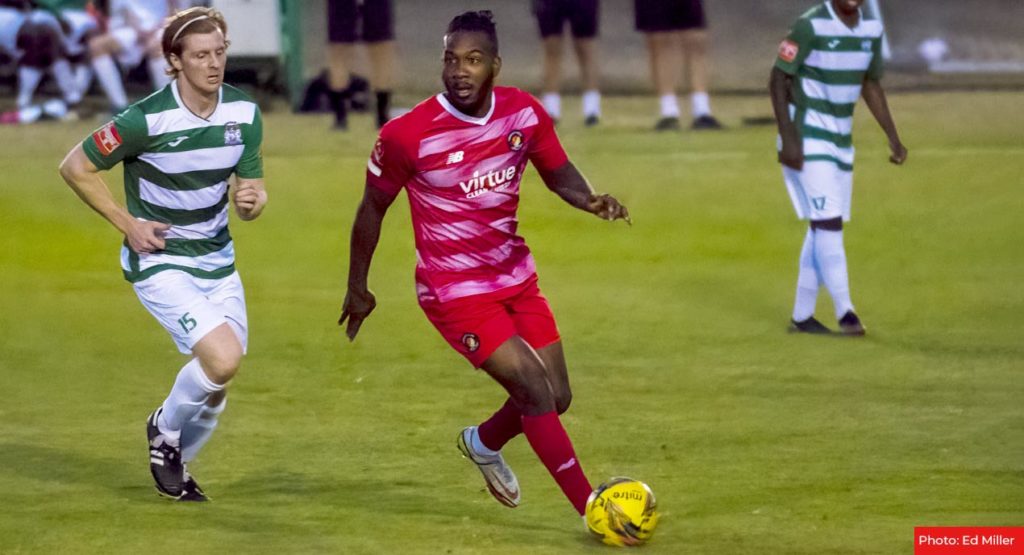 The next time Fleet hit the road, it will be a rather longer and more meaningful trip to Weymouth as Dennis Kutrieb’s side wrapped up their pre-season travels with a draw at Gay Dawn Farm.

And they had to it with 10 players for 88 minutes after an early sending-off for Elliott Romain gave the hosts a man advantage and certainly provided a more energetic runout for those needing the minutes than perhaps had been the plan for the 11-man side.

Supporters had barely taken their positions when a confrontation in midfield saw the referee reach for a red card to dismiss Romain as the Fleet striker was grappled in the first tackle of note and there was an altercation in the aftermath.

It was a decision that did little to aid the spectacle of the game, with Fleet left short up front and the referee forced to dish out further cards to both sides through the evening.

With Shaq Coulthirst ploughing a lone furrow at the Farm, he was helped from outside by Omari Sterling-James who had the first shot on target six minutes in, his effort after collecting a corner saved low on the line.

Tempers were still frayed on the quarter-hour when Corinthian players protested rather too forcefully and Alex Finney was forced to drag Joe Tyrie away from a flare-up of his own making in the Fleet six-yard box.

Sterling-James had his and Fleet’s second effort on 17 minutes, slipping his man after a good move upfield to send the ball towards goal only to be gathered by the goalkeeper once more.

Ten minutes later, a spell of Fleet possession and passing football from side to side pulled the home defence around on the edge of their box and Ben Chapman’s eventual strike was blocked.

From a free-kick moments later, Sterling-James flung in a searching ball towards the top corner that the goalkeeper gathered but dropped over the line as he landed, Coulthirst on hand to help it over just in case.

The visitors stemmed any further action from their hosts until the stroke of half-time when a corner from the left was floated into the six-yard box and Tyrie rose well to power a header past Chris Haigh for the equaliser.

There were fewer chances in the second-half though Fleet were much greedier in possession, leaving Corinthian to chase red shirts for much of the next 45 minutes. Although Franklin Domi was pulled back to a deeper defensive role following three half-time subs, he was always to be found surging past the halfway line and towards the box, looking to release Darren McQueen to his left or Dominic Poleon ahead of him.

So too was Kieran Monlouis to the fore with an energetic display in midfield but with the numerical disadvantage, Poleon couldn’t quite open up the hosts’ back line despite an excellent, hard-working performance from the Fleet striker.

The home side’s best effort came on 53 minutes when a dipping shot flew just over but that was followed immediately with Fleet’s next attack, Toby Edser advancing through the middle only to see his shot saved.

They were the two prime opportunities as the remainder of the game was mainly contested in the home half, both Poleon and Chapman busy and unfortunate on occasion as they created half-chances while McQueen was denied in the six-yard box.

A couple of rather needless cautions were issued by a referee who at times appeared to be over-zealous in his pursuit of discipline and that rather summed up the game’s lack of exhibition as a whole.

Corinthian forced a couple of late corners that provided their best avenue to goal but in truth there was little of real menace for the two goalkeepers as the scores remained locked at 1-1.

Ed Miller has been Ebbsfleet United's communications manager and programme editor since 2014 and responsible for the club website since 2007. Contact him on ed.miller@eufc.co.uk
PrevPreviousProgramme subscriptions are a go!
NextGet ready to roar at the Kuflink!Next