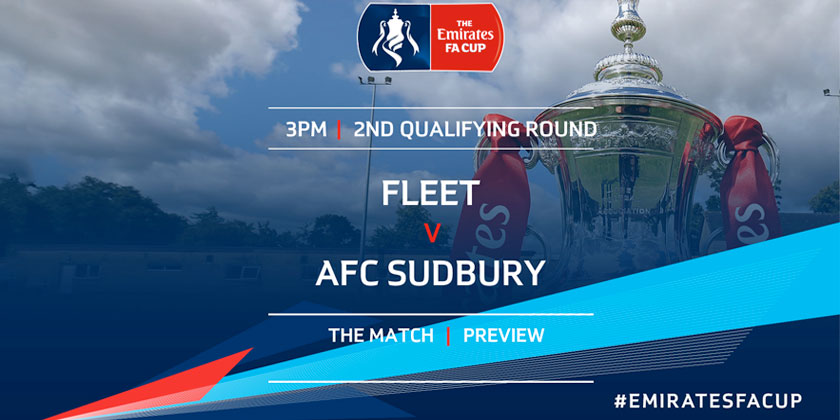 Continuity is key in cup clash

Daryl McMahon renews acquaintances with an old housemate this weekend as AFC Sudbury defender Adam Tann aims to stop a goal-hungry Fleet from progressing in the Emirates FA Cup.

The 34-year-old shared a place with the Fleet boss when both were professionals at Leyton Orient a decade ago and McMahon has warned his forwards that Tann is the sort of player “who loves a tackle, even in training”. Before his time at Brisbane Road, Tann also played a single game for the Fleet, against Stevenage in November 2005, before moving on to Notts County.

The Fleet boss has been pleased with the results of some continuity on the field over the past week and although his team selection may be affected by injuries, McMahon is hoping not to have to change things.

“Team selection boils down to injuries,” he told FleetOnline, “and how players are feeling. I’d like to keep the continuity we’ve got now though. That’s been the key this past week. We haven’t been as fluent as I’d have wanted us to be in August. Players have been in and out and now we’ve finally got the opportunity of a settled side, I’d like to keep things much the same. We’ve got a big league game next week against St Albans which will be a tough one so I’d like to approach it with everyone out there for the Sudbury game as far as possible. We probably will be missing one or two through knocks but we’ll assess that right up to Saturday.”

One definite omission will be Aaron McLean who was substituted 20 minutes from time at Bishop’s Stortford. “Aaron will be out for sure,” McMahon said. “He had a scan Wednesday night so we’re awaiting news on the extent of his injury. One or two others are being monitored and we’ll decide closer to the day.”

While this is our first meeting with AFC Sudbury – the club formed out of a merger in 1999 – Fleet have come up against one of the pre-merger clubs (Sudbury Town) 11 times between 1993 and 1997. Now playing at the old Sudbury Wanderers ground at King’s Marsh, with a 3G pitch that Fleet will have to negotiate should a replay be required, AFC have lost just one game all season which came last week at home to fellow promotion contenders Tonbridge.

The Suffolk side will be missing hotshot Craig Parker – who played in our last FA Cup tie against a Suffolk side when he turned out for Needham Market in 2010. Parker was carried off last week against Tonbridge and the visitors will miss the goals he provides, having scored 28 last season in their promotion campaign. In his time at Needham Market, he also netted 42 in 51 games.

Another doubt up front is ex-Chelmsford striker Luke Callander, who scored four goals in Sudbury’s 6-0 demolition of Halstead Town in the previous round. He sat out Tuesday’s League Cup win over Lowestoft with a hamstring complaint. Manager Jamie Godbold reinforced his side with two loan signings from Bishop’s Stortford – Ryan Auger and Anthony Furlonge; both have permission to play tomorrow, although Auger was another who picked up an injury last Saturday.

Elsewhere, the visitors can boast the talents of Rob Eagle, who played for Norwich City in the Championship and later Grimsby Town, as well as former Concord frontman Sam Bantick.

Godbold has told his players to go out at Stonebridge Road and express themselves without the pressure of the favourites’ tag. That’s something Fleet will have to deal with, but it’s hardly a new pressure for McMahon’s squad and it all sets up an intriguing cup tie.

Supporters are reminded that this is an all-pay game; season tickets, along with half-season and mini-five tickets, are not eligible. Standard admission charges apply.

Ed Miller has been Ebbsfleet United's communications manager and programme editor since 2014 and responsible for the club website since 2007. Contact him on ed.miller@eufc.co.uk
PrevPreviousMacca enjoys Fleet’s goals spread
NextFleet 5-0 AFC SudburyNext