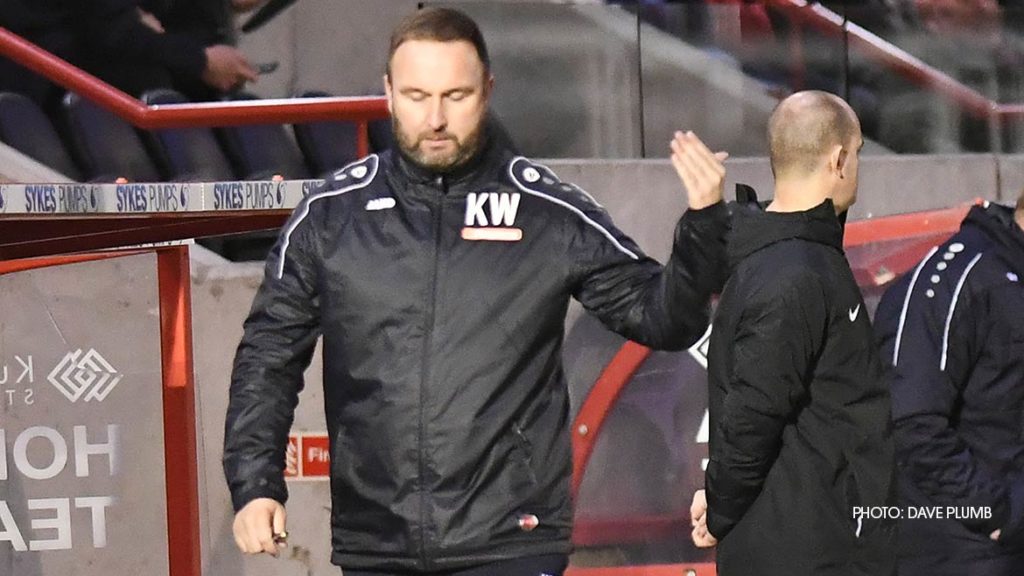 Kevin Watson said his side are fast running out of games and time to prove their desire to stay in the Vanarama National League.

While defeat to Harrogate Town might not have been unexpected given the disparity between the two sides, Watson felt on the balance of the early exchanges that his team should have offered a lot more.

“There wasn’t a lot in it in the first half-hour,” he told BBC Radio Kent’s Charles Webster. “I thought they were there for the beating and you can go in 1-0 down with nothing in the game but you have to have a desire to want to run, want to work, want to tackle, I’m just very disappointed and upset about that.

“Harrogate were well-organised but the 94 minutes just passed us by today. We’re consistently inconsistent and everyone in the ground will say that. There’s times when you’ll go, we’ve turned a corner, we played really well – and then that.”

Fleet’s cause wasn’t helped by being reduced to 10 men for the third game running. Watson had no complaints about Josh Payne’s red card and he has asked questions of his team’s discipline.

“That tried my patience today and I’m extremely upset with certain aspects including discipline on the pitch,” he said. “There’s no way I send players out to be sent off, I wasn’t that type of player and there’s no way one of my teams gets sent out with the intention of being down to 10 men. You can’t win any game of football with 10 men, I’ve just told them that.

“You’ve got to keep 11 players on the pitch to be competitive to have any chance in any games. And three games in a row, that is not good enough. It’s not the just game you’re in, it’s the games that follow. All of a sudden you’ve missed Kingy for games who’s your captain and now you’re missing Josh Payne who’s arguably my best footballer for a game. You can’t carry on like that.

“I wasn’t overly pleased with the way we were playing anyway and I could have made three subs at half-time. I told them you’ve got 10 minutes to liven up. All three were stripped and ready to come on and then one of my experienced players gets sent off, rightfully so. They’re two bookable offences within three minutes. I have no issue with the referee and her sending Payney off. We’ve had a chat about discipline, about things, and we’re quickly running out of games now.”

It was Fleet’s 15th defeat in game No.30 and the manager’s not dressing up the gravity of the club’s situation with each passing fixture.

“We have to change the place we’re heading in and let’s be realistic: we are in a right pickle,” he warned. “Yes, players have come in and we need more to come in with a freshness and an energy, more that haven’t been stuck in a rut and in a relegation fight from the day dot. We need everything we’ve got because we are in an absolute battle to stay in this league. I need players that are desperate to stay in this division and desperate to do well because I am.

“I approached the game today that if you’ve got the shirt, keep it. I went with the same team that had done so well against King’s Lynn and then they produced that. I don’t expect when I pick my team for next Saturday anyone to be knocking on my door. Maybe the time for being fair has been and gone. Our most experienced boys, Westy and Kingy, are coming back from injury and suspension.

“I’m expecting them to do all they can to stay in the team and today apart from our two centre halves [they didn’t]. Marvel rightfully got his champagne and I’ve told him to share it with Ayo. I thought they were good. A lot of my players have been mollycoddled at academies and when you come to the National League and men’s football and three points are at stake, you’ve got to step up to the plate.

“I’ve just singled Marv out there because I had him at Bishop’s Stortford two years ago, obviously two leagues below and Hungerford last year and that is a boy that wants to do well and succeed and go as high as he can. And I want everyone to share his attitude and enthusiasm because he wants to be as good as he can. I need 16 or 17 people like that.”

Watson felt he got that at the start of an otherwise poor game of football this afternoon but that the usual mistakes and shortcomings crept back into Fleet’s play, with only one outcome as a result.

“We started the first half reasonably well and there wasn’t much in the game,” he said. “We were doing the right things which was what I’d asked the boys to do, which was make them turn, run backwards, McGlashan was getting in, Josh Umerah was getting in down the sides and for half an hour it was an even contest but then we stopped doing the right things. We stopped turning them, stopped making them run backwards, it’s incredibly difficult to play a passing game of football on our pitch so therefore take the risk out of it. We weren’t hitting balls big enough to get behind them, they were intercepting it, we couldn’t get out.

“It was a poor game of football, I wasn’t enjoying watching it from either team, it was lacklustre. I wouldn’t say we downed tools because we went down to 10 and we still ran, we still harried, but it’s about knowing where to run, running in the right areas, about decision-making, when to have a touch, when to dribble, when you need to play behind them, when you know you’re going to get caught on the ball stop having so many touches. It looked like we couldn’t reach to clear their back four, it looked like we couldn’t kick the ball properly and this is nothing I’ve not said to them.

“We’re taking risks as everyone sees in silly areas of the pitch. That out there is not a pitch that you can go rolling the ball around like Man City or Liverpool. So play the conditions, make them run backwards. We did for 20 minutes, not with much quality, but all of a sudden we start getting above our stations and trying to play in and around our own box.

“The back four can’t get up the pitch, the midfield can’t get up the pitch, it’s not being retained at the top and therefore you get stuck in your own area and that’s where their goal came from: a passage of play where we’ve given the ball away cheaply. They break, get a corner, we can’t clear the corner properly, don’t tackle properly, it gets returned and we don’t head it properly and they hook it in, good finish.”

Ed Miller has been Ebbsfleet United's communications manager and programme editor since 2014 and responsible for the club website since 2007. Contact him on ed.miller@eufc.co.uk
PrevPreviousFleet 0-2 Harrogate Town
NextVideo highlights: Harrogate TownNext