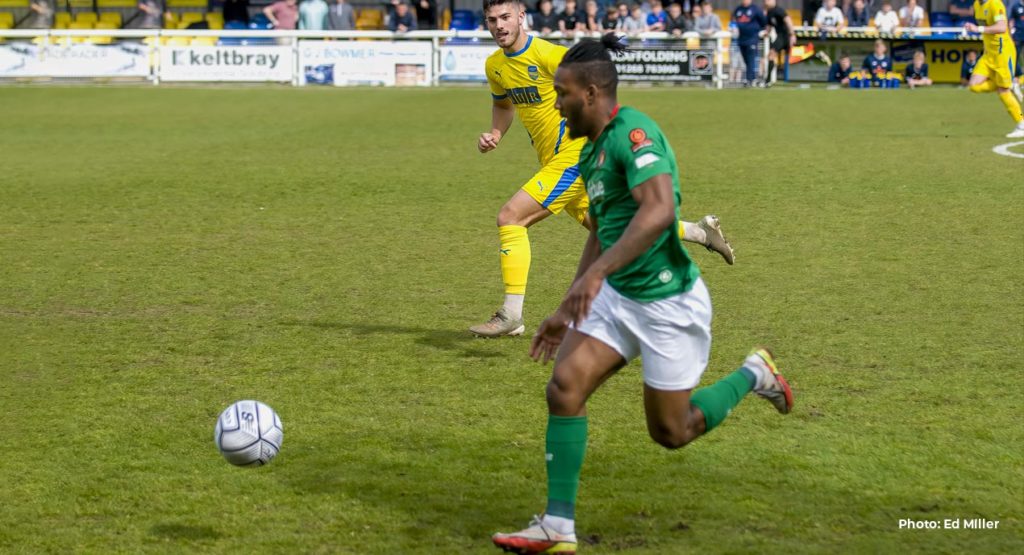 There was a little bit of history repeating as Fleet secured a play-off spot at the Aspect Arena with a 2-1 win, just as we did eight years previously.

And the visitors did it the hard way, coming from behind to take the points courtesy of the Dominic Poleon and Rakish Bingham partnership. Dennis Kutrieb described it as a scrappy game and in truth the first-half was a slow affair, with all the goals and the action coming after the break.

The three points took Fleet above Dartford into third place and it was a gutsy performance, the visitors needing to dig deep and withstand a bombardment of late balls into the box from Concord, who hadn’t lost on home soil since January.

Two changes saw Poleon returned to the starting lineup alongside Joe Martin, their previous places on the bench taken by Shaq Coulthirst and Alex Finney.

A tame start provided little in the way of chances for either side, Ben Chapman’s run across the pitch and cross/shot on six minutes about the only advance into the 18-yard box. With the ball in the air for much of that period, Fleet were at their most effective when they could get it down and play it and Christian N’Guessan’s powerful run from the halfway line gave Poleon half a chance with a turn and shot that drifted past the upright.

Poleon was released for another sprint, this time down the left flank as Elliott Romain dug a pass out to set him free on the counter on 13 minutes but he was matched for pace by Jayden Randall.

Louis Ramsay’s 22nd minute break down the Fleet left was the first real menace Concord showed and they regained possession from a couple of half-clearances by the visitors before the ball was eventually shepherded to safety.

It was a frustrating half for the Fleet who found Concord’s big back line quite the obstacle. Craig Tanner did manage to get the better of them on 29 minutes finding a gap to target the goal but his shot was saved by Myles Roberts.

With the referee increasingly whistle-happy for minor infringements, the opening half was more stop than start, with Fleet’s lay-offs and deft touches not quite coming off on a pitch that wasn’t kind to a straight pass.

At the other end, N’Guessan had to rise high to clear a dangerous Lamar Reynolds ball into the six-yard box before Romain concluded the half with a good shot into the arms of Roberts from 20 yards. There was time for Chapman to find his way into the box but his low pass bobbled around several Fleet feet before it was Concord who cleared.

The second half got off to a poor start with the home side taking the lead within five minutes of the restart. Concord won possession on the halfway line to earn a throw-in. Reynolds then embarked on a run forward, advancing through the Fleet back line with quick feet to strike low beyond Louie Moulden.

The lead didn’t last long, with Fleet back in it on 56 minutes. A spell of lengthy head tennis around the home box saw the ball eventually played wide for Joe Martin to gain ground down the left. He found Bingham whose quick movement bought him the space to convert from a similar angle to his goal on Good Friday to equalise and the ball ran into the far corner.

A Ryan Blackman free-kick for Concord shortly after that was fired into the side netting but the home fans were up to celebrate that as it appeared it might have sneaked in the other side of Moulden’s reach.

It was from the unlikely avenue of a Blackman free-kick that Fleet took the lead on 70 minutes. The Concord player’s set-piece was eventually headed clear by Sido Jombati and Bingham dispossessed Scott before hitting a marvellous first-time pass forward into Poleon’s path. It appeared the Fleet top scorer had taken it too far wide but he expertly cut back inside Tosan Popo to smack it on target and past Roberts for his 17th of the season.

Concord had their moments in response. On 80 minutes Riley Scott’s shot thundered goalwards, whistling just wide. And as the yellow shirts continued to pack the box, Nana Kyei sent another piledriver that rattled off Moulden’s crossbar.

Fleet sub Coulthirst brought a save from Roberts before Concord applied a little more pressure, sending in a succession of high balls from wide and set-pieces. Jombati headed a couple of those clear and the green shirts had to throw men in the way but there was some light relief for the travelling fans as the referee booked Bingham despite the ‘foul’ in question having been committed by a Concord player on his own teammate!

Four minutes of added time was taken up mainly by two more set-pieces for the hosts but the Fleet stayed focused, took the three points and third place with just four matches remaining.

Ed Miller has been Ebbsfleet United's communications manager and programme editor since 2014 and responsible for the club website since 2007. Contact him on ed.miller@eufc.co.uk
PrevPreviousReserve your place at our 75th anniversary evening
NextDifferent ways to winNext