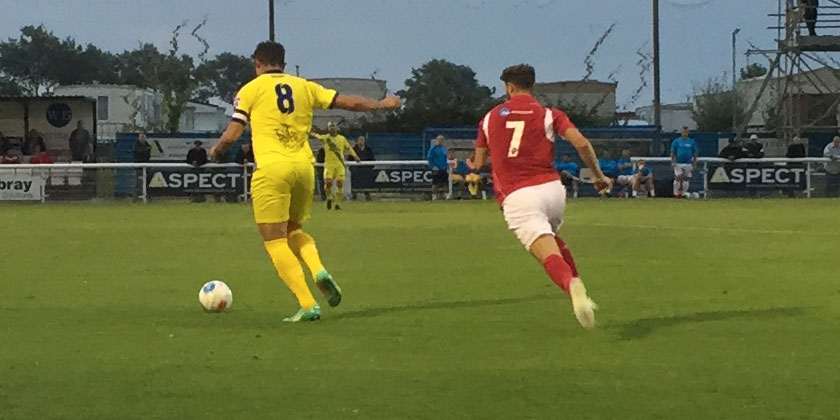 After two seasons of drawing a blank at the Aspect Arena, Fleet were able to turn the tables on Concord Rangers to record their second win of the season. The victory was courtesy of a first club goal for Dave Winfield and a dogged second-half performance against a typically resilient Concord side.

Daryl McMahon made three changes to his side, bringing in Matt Fish, Anthony Cook and John-Paul Kissock, which left Jordan Parkes, Reiss Greenidge and Darren McQueen on the bench. With a more familiar flat back four, and Cook and Sean Shields patrolling the wings in support of Danny Kedwell, Fleet got the ball down well and kept possession from the first whistle, denying Concord any real sight of goal.

Concord had clearly heard good reports about Cook from Saturday as they attempted to shackle him with a combination of legal and somewhat more illegal manhandling and the Fleet wide man was getting a good close-up look at the home pitch.

It took Shields just four minutes to make his mark as he cut in from the right wing to flash an effort across the six-yard box. He lifted another shot just over while at the other end, Nathan Ashmore got down smartly to a quick dash down the left from Joao Carlos.

Fleet looked increasingly confident in midfield and were knocking the ball around with some panache, Jack Powell always looking for an opening and Shields and Cook lively. The visitors’ best chance arrived on 16 minutes when Fish dinked a disguised pass beyond two Concord players and Shields nipped in to cross but it was just over Kedwell and turned behind for a corner.

Concord weathered the storm, however, and enjoyed a spell on top with a succession of set pieces. But just as they were finding their feet again, Fleet struck. What would prove to be the only goal came on 31 minutes when a ball into the box was charged down by Kedwell. It fell for Kissock who prodded it though to Winfield and he turned smartly to fire it into the bottom corner.

Minutes later, Cook thundered down the line and was felled by a blatant charge as Jay Dowie came across to meet him. The Concord defender received a yellow card and was extremely fortunate that the referee chose to take a conciliatory view of his next foul moments later which on another day could have seen a second caution.

From both those incidents, Powell launched free-kicks at the Concord goal at similar distance to his strike on Saturday but though they were good efforts, they didn’t beat goalkeeper Ben McNamara.

The visitors looked like they had the game there for the taking but Concord had other ideas and proved far more troublesome in the second period. James White took advantage of an errant pass and crossed for Alex Akrofi who was only inches away from contact. Four minutes later Steve Cawley unleashed a curling drive that Ashmore had to leap high to clutch out of the air.

Fleet were a little disjointed but had a great chance on 58 minutes when the impressive Jack Connors, who had enjoyed a few runs in the first half, intercepted a ball and threaded a pass into Powell who had two shots on target both of which McNamara managed to block.

As the game entered the final 20 minutes, the referee took centre stage denying several penalty shouts. The first came when Kedwell went down as Steve King slid in on him but the man in the middle wasn’t interested in half-hearted shouts for a spot kick. The incident did result in Kedwell hobbling off to be replaced by McQueen to give Fleet more injury headaches up front.

On 75 minutes, Concord had the first of their penalty shouts when Akrofi and Winfield tangled on the edge of the box and the No.9 went to ground but that one was waved away as well. Cawley then lashed a fine free-kick goalwards that Ashmore did extremely well to tip over as the home side continued to press for an equaliser.

The game really livened up at this stage and substitute Sam Deering was ever so unfortunate to see his shot come back off the post after he’d shown great skill to cut inside and create room for an effort. McQueen, too, was causing problems whenever Fleet could get the ball forwards for him to chase on to.

Four minutes from time and Winfield and Akrofi were at it again, with the Concord player again hitting the deck and Fleet fans had their hearts in their mouths as the referee blew… but then booked Akrofi for diving.

It was end-to-end stuff and McQueen was the next player to be sent tumbling as he outpaced but couldn’t outfight the giant presence of defender King but the sprawling form of the Fleet substitute again left the referee unmoved.

There was still time for Concord and they came even closer to an equaliser on 90 minutes when White’s hefty shot seemed to have Ashmore beaten but a well-placed Kissock hastily hacked it off the line. Greenidge entered the fray with four minutes of added-on time to play and he was sent forwards in a bid to give Fleet some presence up front where McQueen and Deering weren’t exactly the tallest of targets to hold the ball up.

It was a nervy climax to the game but with Winfield and Kenny Clark resolute at the back, Concord were unable to break through and Fleet recorded their first win on the island since 2014.

Ed Miller has been Ebbsfleet United's communications manager and programme editor since 2014 and responsible for the club website since 2007. Contact him on ed.miller@eufc.co.uk
PrevPreviousStadium latest: early August
NextFleet rope in the real McCoyNext