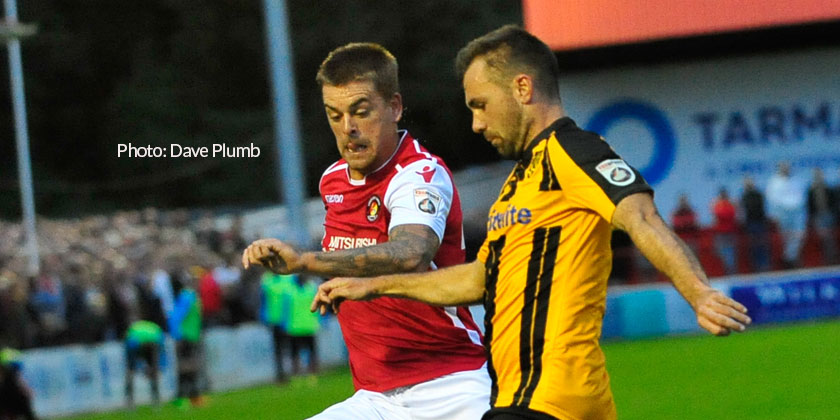 Coasters Fylde are a Fleet first

Having faced Guiseley for the first time last Saturday, Ebbsfleet United are ready for another new experience as National League North champions AFC Fylde visit Stonebridge Road for the first ever meeting of the two clubs.

We may not have crossed paths with the Lancashire club before now but there are plenty of similarities.

“Everyone keeps telling me they’re a northern version of us,” Daryl McMahon told FleetOnline. “They try and play good football, they’re an ambitious club. Dave Challinor’s done a great job.”

Off the pitch, there are a few links and similarities as well. Fylde changed their name from Kirkham & Wesham FC the season after the Fleet switched from G&NFC and the club also lifted silverware at Wembley the very day after ourselves as winners of the FA Vase. They have considerable resources thanks to a wealthy owner and, like ourselves, they failed in two play-off campaigns before clinching promotion last season. They have also recently acquired new facilities having moved into the state-of-the-art Mill Farm stadium last August.

Fleet’s biggest test might be keeping a vibrant attack in check – Fylde scored 109 goals en route to the title last season and 47 of those came from striker Danny Rowe, who signed a new contract in the summer despite EFL interest. But according to McMahon, that threat is nothing the Fleet haven’t faced before.

“Our defenders coped well with Dave Tarpey last season,” he said. “They’re totally different players, though, but both have great goalscoring records. And Fylde will be very different from what we’ve been used to in the South with Maidenhead. Fylde are a totally different team, they get the ball down and pass it and play it out from the back, using attacking full-backs, three or four of whom played against us for Kidderminster in that game! They’re a different animal to anyone we’ve faced for much of last season and the first two games of this one.”

But the Fleet boss is prepared and believes his side’s pre-season games will help in that regard. “Fylde will probably be more similar to teams we played in the friendlies,” the boss said. “The Football League teams, in how they try to play, is how Fylde and many teams in this league will operate and that’s part of the reason we played the games we did in pre-season.”

Fortunately for McMahon’s plans, the torrential Wednesday weather struck on a non-training day for the Fleet, who have otherwise enjoyed an uninterrupted week of training. “It was just as well,” said the manager. “We’d have needed flippers out there!”

He’ll be forced into at least one change this Saturday with the news about skipper Dave Winfield not expected to be promising. “I don’t know the full extent yet,” said McMahon. “We’ll probably know more by the weekend but it’s really not looking too good at the minute.”

That could mean Sam Magri slotting in there to replace the captain, or Yado Mambo is also available. Jack Connors should also be fit to give Fleet a full complement of full backs. Dean Rance is another few days away from a return and McMahon says he could be ready for next week. Anthony Cook sits out the last of this three-match suspension.

Fylde will arrive with a smaller squad than expected, having sold key midfielder Dan Bradley to Kidderminster Harriers last week for £75,000, the player having been transfer listed at his own request to play nearer home for family reasons. They are also four players light following an FA charge as a result of an investigation into betting. That has seen two Fylde players – Matty Hughes and Caspar Hughes – depart without a renewal of their contracts while two more – Brendon Daniels and David Morgan – haven’t featured in either of the Coasters’ league games to date.

But Challinor’s squad still boasts plenty of talent, with Jack Muldoon signed from National League champions Lincoln City, while young Jonny Smith is earning good reviews after arriving from Bristol City on loan. He was even labelled “the new Gareth Bale” during a stint in Wrexham’s academy.

After two draws, Fylde will be keen to get three points under their belts and an added motivation for hotshot Rowe, who has yet to score this season, is that he’s only two strikes away from the club’s all-time record.

Ed Miller has been Ebbsfleet United's communications manager and programme editor since 2014 and responsible for the club website since 2007. Contact him on ed.miller@eufc.co.uk
PrevPreviousTrust joins with club in introducing priority tickets scheme
NextNew season, new League… new Vivaro!Next