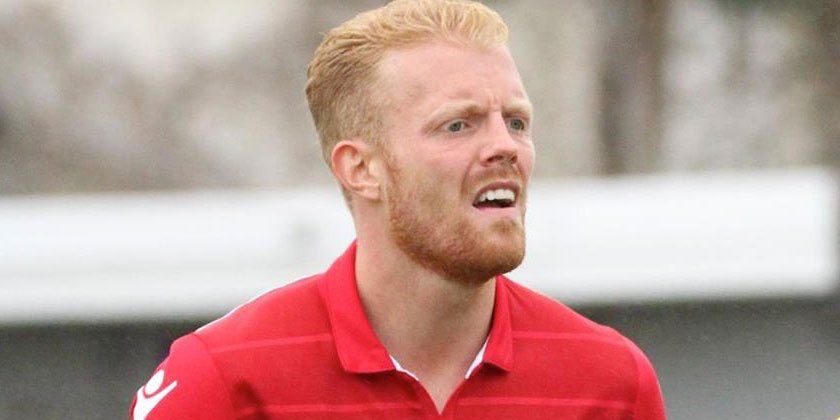 Clark targets old friends at the turn of the century

Kenny Clark is due to rack up his 100th appearance for the Fleet on Saturday against his former club and his experience at the back could be the most vital ingredient in the starting XI, with defensive partners Dave Winfield and Mark Phillips rated only 50/50 to make the line-up.

Phillips injured an achilles to add to Fleet’s casualty list that also includes Andy Drury, with all three players not certain of being passed fit in time for Saturday.

Clark, who won man of the match in the Fleet’s last home game v Dartford, another of his former clubs, told FleetOnline, “I knew the 100 was coming up but not this quickly. To do it against one of my old clubs where I played a lot of games and have some fantastic memories is a really nice touch. We owe them one for the defeat earlier in the season and we’re really looking forward to it.”

His manager has praised the defender’s consistency and contribution since signing in 2014, saying “Kenny has been a brilliant signing for Ebbsfleet. He’s been a model professional here, very reliable and a real man out on the pitch.”

Fleet may need that experience if Winfield and Phillips are both ruled out but McMahon has another former Chelmsford player in Yado Mambo to fit into that hole if needs-be, while Reiss Greenidge has also returned from his loan period at Hemel Hempstead Town. “We’re well covered in those defensive areas,” McMahon said. “The injured players are in contention but it’s touch and go at the moment.”

“Chelmsford have a bigger budget this season and some very good players but we’re not a bad side either! That’s what we have to remember when we go up against them, it’s about us getting back on track.”

Chelmsford have their own defensive woes with Chris Bush suspended and it was some of his long throw-ins and high balls into the box that caused Fleet problems in the defeat at the Melbourne Stadium. Bush could be replaced by either of two new signings, Michael Spillane (lately of Lowestoft and Sutton) or more likely their even newer signing, former Dartford and St Albans defender Josh Hill who signed on Thursday. Hill has already played at Stonebridge Road this season, in the Saints’ 3-1 defeat in September.

Another to have played at Stonebridge Road already is Elliott Buchanan in his brief spell at Margate and last season’s league hotshot is slowly getting into his stride at City, scoring a hat-trick on New Year’s Day against former club Bishop’s Stortford. Manager Rod Stringer hasn’t been afraid of introducing plenty of new blood, with Buchanan filling the boots of the departed Billy Bricknell and Shamir Mullings. Other fresh faces include former Charlton and AEL Limassol striker Chris Dickson, ex-Arsenal youth Philip Roberts from Sligo Rovers, defender Matt Young and midfielder Kane Haysman.

The Clarets have fired 52 league goals this season, with just three defeats, and though they lost Mullings to Forest Green, they can still boast 14-goal Shaun Jeffers up front, while Robbie Willmott has provided more than 20 assists from the flanks. A succession of draws from late October through to early December checked City’s progress up the table somewhat but the Clarets still fancy themselves to catch Maidenhead if they can put a run together, starting at Stonebridge Road this weekend, and they are unbeaten in all competitions since early November.

Chelmsford rested several first-teamers for their midweek Essex Senior Cup win over Braintree and Stringer is looking to extract another win from North Kent, having turned Dartford over in the FA Trophy last weekend. He told Chelmsford’s website, “Ebbsfleet’s a tough game, they’re a good side and it’s always tough to go over to Kent. It is a six-pointer, we can’t afford them to take too much ground on us. They’ll be looking to make sure we don’t win the game. Who knows, we might get another result in Kent this weekend.”

This will be the clubs’ 89th meeting, with Fleet just edging it with 36 wins to Chelmsford’s 34 but the Clarets have won four of their last six visits to Stonebridge Road. A stalemate is a rare result in these fixtures, with 27 years having passed since the last draw between the clubs in Kent.

There are no plans for a pitch inspection at present with ground covers in place to keep off the worst of any frost this weekend.

Ed Miller has been Ebbsfleet United's communications manager and programme editor since 2014 and responsible for the club website since 2007. Contact him on ed.miller@eufc.co.uk
PrevPreviousLewis loaned out to end of season
NextFleet 2-0 Chelmsford CityNext