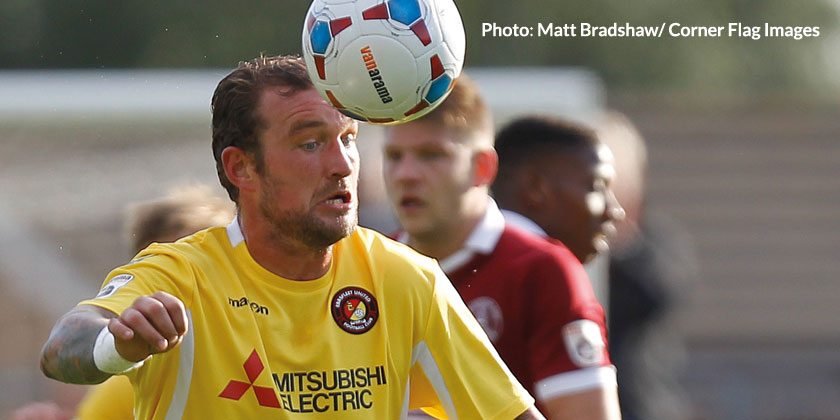 Whoever prints Chelmsford’s golden-goal tickets could have saved themselves a small fortune if the last two Fleet visits to the Melbourne Stadium are anything to go by.

Quite how Daryl McMahon’s side went home with just a point this afternoon in one of the most one-sided games witnessed by Fleet fans this season was the question on most observers’ lips at the final whistle. That said, Mark Hawkes’ Chelmsford side once again proved resilient, goalkeeper Christian Dibble was a formidable barrier and they will argue that for the third time this season it was job done from their point of view.

Fleet recalled John-Paul Kissock who replaced the injured Dean Rance and that meant Danny Haynes kept his place in the side. Returning to the bench for the first time this season was Theo Lewis.

The visitors were out for revenge after Chelmsford’s victory in the FA Cup and Danny Kedwell took no time at all to get going, floating a shot just over the bar seconds after the kick-off. The home side then lost full-back Mark Haines after he got caught in the face by Stuart Lewis, who had challenged for a high ball. There was no malice in it, but it ended Haines’ afternoon and they were forced to deploy midfielder Luke Daley at right-back.

It was a fairly sedate opening quarter of an hour, with Fleet failing to get into any passing rhythm and sliding tackles the order of the day on a slippery surface. The game’s main talking point arrived on 20 minutes when Danny Haynes wriggled into space on the byline, leaving Rob Girdlestone for dead, and fired in a low cross that Jordan Parkes forced over the line. The assistant referee flagged for a dubious offside and Fleet were to rue his decision.

The incident did at least click the visitors into a higher gear and they played at a tempo that rarely let up for the next 70 minutes. Kissock, as ever, dictated the play in the middle of the park, proving almost impossible to push off the ball and he set up a near-constant supply line on the edge of the Chelmsford box.

Lewis saw a long-range shot go over and Parkes should have done better than drag an effort wide of the right-hand post when he had time to pick a spot as Fleet buzzed around the final third without finding too much in the way of a nailed-on opportunity.

Matt Godden was unfortunate to find Daley in his way as he shaped to shoot from a Joe Howe cross, the Fleet left back doing plenty of solid running and delivery along his flank.

And somehow Chelmsford escaped the wrath of a Kedwell free-kick five minutes before half-time. It was from a central position and certainly Parkes territory but Kedwell opted for power and unleashed a firm drive that Dibble somehow pushed onto the crossbar and away.

The incessant yellow tide came again in the second half. Twice Lewis thundered shots goalwards as he tried to give Fleet an alternative route to goal, the groundwork into the box continually blocked by claret shirts. Kissock continued to drive his side forward, always finding Matt Fish to fire in a cross or seeking out Kedwell and Godden who time and again attempted to turn the home defence.

But Chelmsford for the most part managed to keep Fleet at bay at the 12-yard mark and packed their defence at every opportunity. For all their possession, however, Fleet still had to be mindful of Chelmsford on the break and the home side had one or two chances, most notably when Jordan Brown got free on a rare break and his pass to Bagasan Graham had to be hastily deflected clear by Kenny Clark.

Back came the Fleet and Kedwell succeeded in getting round the back to play in a low cross that was crying out for a touch but Dibble managed to get his fingertips to it and guide it to safety. The goalkeeper also got in the way of a Godden shot from close range.

Two more chances came Chelmsford’s way, with Tom Bonner doing very well to take the ball off Brown’s feet as he shaped for a shot and then Hall being well-placed for Lee Sawyer’s attempt, but other than that it was one-way traffic.

Fleet finished strongly and had two golden chances to win it late on. Both fell to Godden and he must have wondered how Dibble stopped his first effort, with Fleet finally unlocking Chelmsford through the middle and Godden found space to fire a shot on target from eight yards that Dibble somehow pushed away.

The Fleet No.10 then had another decent chance with time running out as the ball fell to him in much the same position as his previous effort but this one he stabbed over the bar.

But there was no way through and, having been the first team to beat the Fleet this season, Chelmsford became the first to hold them in an away league fixture. On the plus side it was a point that extended Fleet’s lead to nine – and at least the return fixture against a team we’re more than used to isn’t until April!

Ed Miller has been Ebbsfleet United's communications manager and programme editor since 2014 and responsible for the club website since 2007. Contact him on ed.miller@eufc.co.uk
PrevPreviousTottenham take Tracey on trial
NextFleet players to back Black History MonthNext