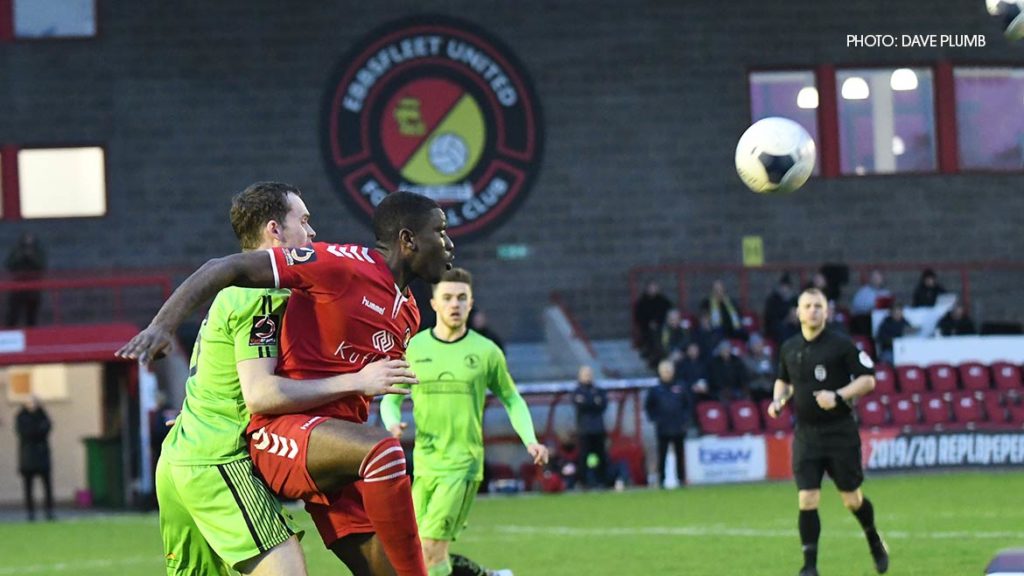 Can King’s slayers be Gate-crashers?

From Barrow to Harrogate, one form team to another, the quest for Vanarama National League points gets no easier for the Fleet. But levels of difficulty are pretty much irrelevant for Kevin Watson’s side who just need the points, no matter from where they come.

Harrogate are in the form of their season lately, having not conceded a goal in more than six hours of football and having achieved a point more than Barrow over the last six games to put them top of the form table.

But having ended King’s Lynn’s 14-match unbeaten run last week (pictured) and prevented them scoring for the first time in 10 games, 10-man Fleet had plenty to take into this week of training

For Watson, the visit of Harrogate brings things full circle on his tenure to date, with the previous fixture at the CNG Stadium having marked his first experience of the Fleet dugout.

“Harrogate was my first game when I came in with Garry Hill up there and I was surprised at how good they are,” he said. “They’re well organised, they do their jobs, they’ve got good players, they play to a system and they’re flying in this league.

“Every game we play is a tough game so whether top, middle or bottom you know you’re going to be in for a tough time and Harrogate will be no different. We’ll do our homework.”

Adam Mekki comes into the reckoning for a potential debut and if Gozie Ugwu recovers from a back spasm, it could allow for Jermaine McGlashan to drop back to a wide position. With two natural wide players available, that could allow for another week’s recovery for Myles Weston rather than hurrying him back into the fray.

Jack King serves the final match of his suspension and Andre Blackman begins the first of his three after the club decided an appeal to the FA would not convince on video evidence alone.

Harrogate don’t have quite so many gaps to fill; indeed Simon Weaver’s side will likely be largely unchanged from the one that won 2-0 in Yorkshire in October.

The Town boss has recruited only one new face since then, Nottingham Forest left-back Owen Gallacher on loan last week. Big striker Mark Beck will likely sit the game out through injury but 10-goal Jack Muldoon’s probable strike partner is former £1m man Jon Stead, once of Blackburn Rovers, Sunderland and Ipswich Town.

After a stop-start beginning to Harrogate’s second National League campaign, they haven’t looked back since autumn and a win at the Kufink Stadium tomorrow would take them level on points with leaders Barrow ahead of their evening TV clash at home to Bromley.

If Fleet need to target any weak spot, it’s Harrogate’s away form which places them only 13th. Although the visitors have won their last two games on the road, they have dropped points in five of the previous six. Indeed their last defeat came on their travels, at Boreham Wood just before Christmas.

The match is not segregated and Harrogate fans may use the club bar by the turnstiles. Car-parking is available at Ebbsfleet International Station Car Park C for £3. This is the best option for parking near the stadium. Please respect local businesses by not blocking private property. Drivers are also warned that parking on the Thames Way clearway near the roundabout runs the risk of being ticketed.

Ed Miller has been Ebbsfleet United's communications manager and programme editor since 2014 and responsible for the club website since 2007. Contact him on ed.miller@eufc.co.uk
PrevPreviousFinal opportunity for player sponsorships
NextFleet 0-2 Harrogate TownNext