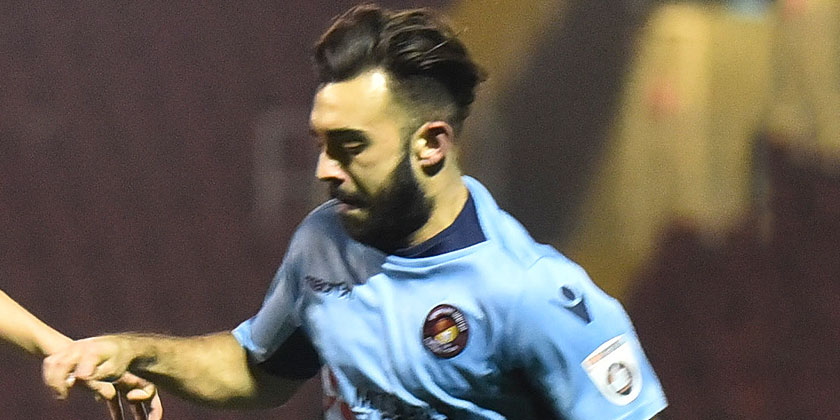 Fleet fans face a 340-mile round trip – assuming opponents Kidderminster Harriers beat the weather – as they back their side’s bid to reach Round Three of the Buildbase FA Trophy.

Having beaten Woking on their own patch in the previous round, Fleet will be confident of getting something from a tough encounter, with Harriers boasting an almost identical record in the Vanarama National League North.

“We’re looking forward to it,” said Daryl McMahon. “They’re doing well, second in their league. We’ve had a look at them over the past week or two and we look forward to the day out.”

The Fleet boss fielded strong teams in both ties against Woking and at this stage of the Trophy is unlikely to change that, despite the obvious separate issue of league progress. The prospect of a potential replay looms large also, with an important clash against Chelmsford coming up on Saturday, so the manager will be keen that any advance to the Third Round is achieved at the first time of asking.

Last weekend’s 4-2 win at Wealdstone will certainly have given the Fleet manager food for thought about team selection with goalscorer Sam Deering (pictured) doing himself a favour with a decent second-half performance.

But Harriers will present a formidable obstacle. The former Football League side were relegated from the National League last season but show every sign of bouncing straight back. Like ourselves, however, they trail the league leaders (AFC Fylde) by eight points and with 47 in the bag, are only one point behind the Fleet’s total. A 3-0 reverse at Salford City, Harriers’ heaviest of the season, last weekend contrasts with Fleet’s 4-2 triumph at Wealdstone and manager John Eustace, a former Coventry City, Stoke City, Watford and Derby midfielder, has demanded a reaction from his side.

Eustace has signed young full back Josh Ezwele on loan from Yeovil Town and he could feature on Saturday in a squad that is one of the youngest at its level. Aside from former Wolves and Cheltenham defender Keith Lowe and midfielder James McQuilkan, much of the rest of the Harriers likely starters are under 25.

The danger man is top scorer Arthur Gnahoua, a tall, pacy wide player or striker with previous experience at Macclesfield Town, who is in double figures for the season. Midfielders Jordan Tunnicliffe and Elton Ngwatala are others who have caught the eye this campaign but the bulk of the Harriers squad will be fairly unfamiliar to Fleet fans, with few players having featured against us down the years.

Influential Antigua & Barbuda international and former Motherwell wide player Zaine Francis-Angol is a hamstring injury doubt, but the home side expect to welcome back midfielder Ryan Croasdale from suspension.

Eustace told his local media, “We watched Ebbsfleet at Woking and we know it will be a tough game for us. But once again it will be an opportunity for our young squad to learn about the levels they need to be at each week to be a good team. It will also give us a chance to hit back quickly following the Salford loss.”

Kidderminster’s cup form this season, like Fleet’s, saw plenty of goals with 15 scored in the Emirates FA Cup before they bowed out at Blackpool. In the Trophy, Harriers have beaten Lincoln United and AFC Telford United.

This will be the 39th meeting between the clubs but the first in the Trophy, with the bulk of our head-to-head clashes coming in the Southern League and the Conference. Fleet’s last visit to Aggborough resulted in a 3-2 defeat in 2013 and indeed it has hardly been a happy hunting ground with just two wins and four draws from 19 visits. Our first trip to Kidderminster was in 1949 and it took us 57 years to win a game there, which we then repeated the following year.

The club have deployed covers this week in a bid to keep the worst of the weather from affecting the pitch so hopes are high that this game won’t be affected by any adverse conditions and there were no plans for a pitch inspection as of Friday lunchtime. Aggborough has enjoyed an average attendance just a little short of 1,700 this season. Click the links to find details about travel and admission prices.

Ed Miller has been Ebbsfleet United's communications manager and programme editor since 2014 and responsible for the club website since 2007. Contact him on ed.miller@eufc.co.uk
PrevPreviousCasey Johnson returns to Fleet duty
NextKidderminster Harriers 3-0 FleetNext