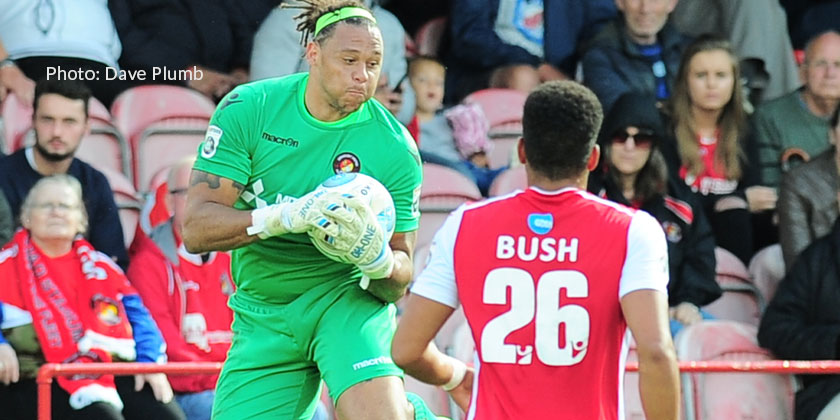 Bush gets 11th hour reprieve for the Wood

Fleet defender Chris Bush has been handed an unexpected stay of execution ahead of what the club had believed would be a one-game suspension after picking up his fifth yellow card last weekend.

Under previous regulations, having allotted four yellows for Chelmsford and one for the Fleet, the No.26 would have been suspended for one game. However, that is no longer the case and the FA has informed the club today that due to the step up to a higher level, Bush’s four yellows from the National League South are not carried over into the National League, so he effectively has just one yellow card against his name now.

That’s either a boost or a complication for Daryl McMahon depending on how he has shaped his tactics this weekend. It’s yet another former club lying in wait for the Fleet boss as he returns to Boreham Wood looking for the spark that will reignite’s Fleet’s push for points.

Having faced Dover, Eastleigh and former employers Dagenham & Redbridge already, Meadow Park sees McMahon revisit a club where he enjoyed two spells either side of his years as an Ebbsfleet player. As a former assistant manager of the Hertfordshire club, the Fleet boss enjoyed a good working relationship with Wood chairman Danny Hunter and is also an ex-teammate of the club’s current manager Luke Garrard.

Boreham Wood also happened to be McMahon’s penultimate league game in a Fleet shirt before he moved to Hertfordshire for a four-month stay during the managership of Jamie Day. How Fleet would love a repeat of that one, when they went up against the then Conference South leaders with an injury-hit squad and an untried formation and triumphed in a 3-1 away win.

Other than long-term injuries to Dave Winfield and Bradley Bubb, the only player to miss out with injury for last weekend’s clash against Tranmere Rovers was Sean Shields with a pulled stomach muscle and with the winger improving, Fleet’s injury problems appear to have eased after a tortuous couple of weeks.

It could be a testing time for the Fleet defence against the second-highest goalscorers in the division. Wide players Bruno Andrade and Colombian Ángelo Balanta have scored seven between them so far and with the Wood having added new loan signing Dan Holman from Cheltenham Town today (Friday), they are clearly in search of even more firepower. Former Dagenham and Charlton hotshot Paul Benson is also likely to be an option from the bench.

Garrard’s side have established themselves in the top division since their 2015 promotion, having survived the loss of Ian Allinson, the manager who got them there. Having finished 19th in their first season and 11th in 2016/17, they are currently lying in that same position, showing solid improvement year on year and are only three points off the top spot.

Boreham Wood came unstuck at Maidenhead last week but they have some impressive results on their own turf, including a 3-0 win over Leyton Orient and victory over the only team to beat the Fleet this year – Aldershot Town.

Ed Miller has been Ebbsfleet United's communications manager and programme editor since 2014 and responsible for the club website since 2007. Contact him on ed.miller@eufc.co.uk
PrevPreviousManager’s Notes 16.09.2017
NextBoreham Wood 0-1 FleetNext