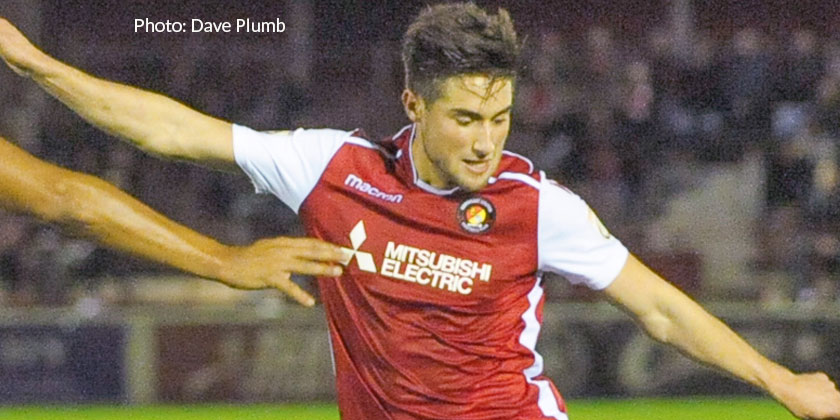 Fleet were left with it all to do after allowing Bromley a three-goal first-half lead and almost fought their way back to a brave point after a spirited second-half performance until a late home goal decided this New Year’s Day fixture.

Two deflected goals to add to the two that denied Fleet points over Christmas will leave Daryl McMahon rueing his luck, though neither will he have been pleased with how Bromley were allowed to rack up a 3-0 lead.

After deciding his side looked somewhat jaded towards the end of the game against Dagenham & Redbridge, the Fleet boss brought in Chris Bush and Sean Shields, with Marvin McCoy and Myles Weston dropping to the bench. And initially, it seemed to fire the Fleet to great heights as they started quicker and brighter than the home side, though Sam Magri was perhaps too fired up when he clattered into his former Dover teammate Tyrone Sterling but escaped a yellow card.

Adam Mekki was the liveliest for Bromley early on with three shots at goal but all of them off target, while Fleet had the better opportunities. On 10 minutes, Andy Drury had an excellent chance to open the scoring after a Magri delivery was drilled into the box and Drury sidestepped one tackle before seeing his shot blocked. Sean Shields then sent a cross looping over David Gregory only to see it clip the top of the crossbar.

Six minutes later, there was another opening for the visitors when Luke Coulson and Jack Powell exchanged passes and Coulson powered through on goal only to overrun the ball slightly and his resulting shot didn’t trouble Gregory.

Fleet paid for that within two minutes. Louis Dennis, who had proved a handful on Boxing Day, picked his moment for a cross into the box and it eluded the Fleet defence allowing Jack Holland to nip into a gap and steer an effort beyond Nathan Ashmore. One goal turned into two before the next 10 minutes were out as Bromley raced into a 2-0 lead courtesy of a bizarre effort. Josh Rees played a ball out right to Mekki, his shot took a deflection which confounded Ashmore and though he blocked George Porter at his near post while prone on the ground, the Bromley striker cleverly back-heeled it on the goalline before the Fleet goalkeeper could recover a second time.

Bromley’s slow start was quickly forgotten and Neil Smith’s side exuded confidence for a 20-minute spell. With Fleet left flat by the second goal, Bromley were happy to take the game to them and a third goal on 36 minutes was more than the travelling fans could bear. With patient passing around the Fleet box, Luke Wanadio decided to try his luck with a cross hooked in from the left and with Dennis making a dash towards the ball, Ashmore followed the run but instead the cross went straight in.

Fleet needed something quickly to avert a catastrophe and they did well to dig in as the first half closed. Their first lifeline arrived five minutes before half-time when Magri’s intervention in the middle saw a ball loop over a flat Bromley defence and Drury reacted quickest to latch on to it and despatch a shot past Gregory to reduce the arrears.

The visitors ended the half with more purpose but couldn’t find the crucial second goal that would have sent Bromley in at the break unnerved. McMahon changed things around for the second-half, sacrificing Powell for Weston and Fleet were much more proactive. Bromley began the second 45 with more shots on goal, although most flew off target and Mekki’s long-distance aerial ball in caused Ashmore to back-pedal and tip it over the bar.

But Fleet hauled themselves back into the reckoning on 54 minutes when Shields covered some ground down the right and advanced into the box, loosing off a shot which beat Gregory at his near post. That strike galvanised McMahon’s side and they took the game to Bromley in search of an equaliser. Bush and Kedwell exchanged passes and the former went down under Holland’s challenge though it seemed legitimate before Weston flashed a low cross past Gregory but nobody in a red shirt could get a toe on it.

Weston’s willingness to run at Luke Woolfenden was keeping the home side penned in for a period and Fleet won a number of corners, while Kedwell wasn’t far away with a header as Gregory’s save from a cross steered the ball into his path. With 20 minutes left, Bromley began to reassert themselves and Dennis reminded Ashmore of his threat with a decent shot well-saved while Rees had two efforts from distance fly just off target. Fleet hadnt yet given up, however, and Gregory needed his skipper’s intervention after fumbling from Weston on the line and Holland had to mop up.

Fleet’s fire was finally doused, though, when Dennis picked off any final resistance five minutes from time. Again, it came with a slice of luck as he hooked a shot goalwards and the ball flew off Dean Rance to loop over Ashmore.

Ed Miller has been Ebbsfleet United's communications manager and programme editor since 2014 and responsible for the club website since 2007. Contact him on ed.miller@eufc.co.uk
PrevPreviousMaidstone game to be pay on the day
NextGraham loan extended to end of seasonNext