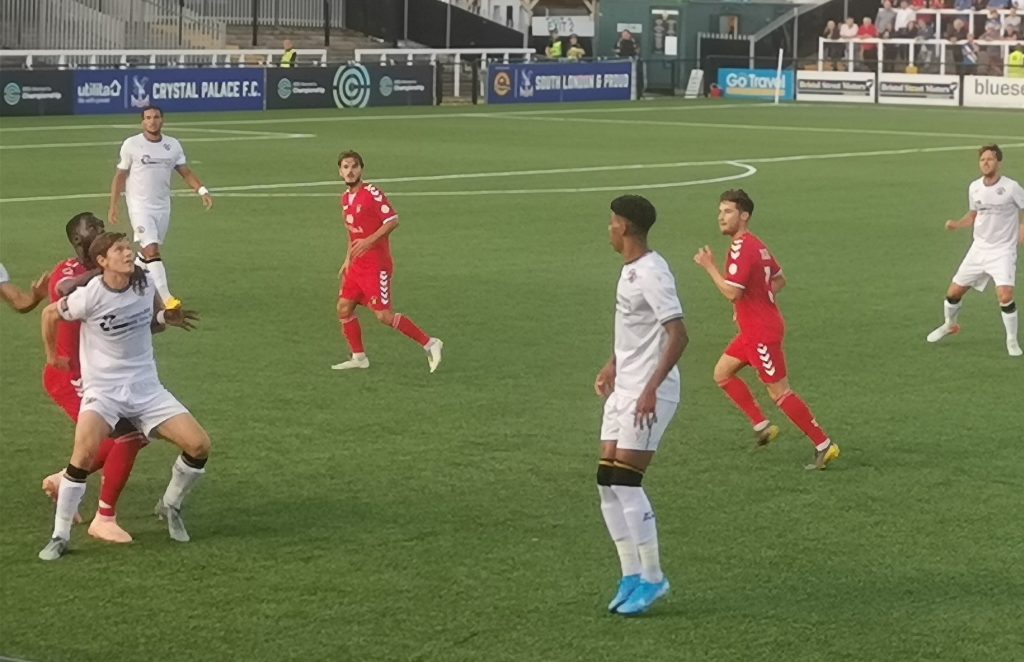 Hayes Lane continued to confound the Fleet as Bromley ran out convincing winners, scoring two quick fire first-half goals that left the visitors with a mountain to climb.

With Jack King suspended, Fleet were forced into deploying James Ball in defence once more, Sean Shields coming in which in turn forced John Goddard to tuck in to more of a central position early on. On the bench, Fleet named new Academy scholar Emilio Regini-Moran, registered to first-teams forms only today.

Eager to put Saturday behind them, Fleet started confidently enough and even managed a shot on target inside 20 seconds as Gozie Ugwu rolled a shot into the hands of Mark Cousins.

Both sides exchanged a couple of corners, but Bromley’s looked the more menacing and twice Jack Holland was left in space on the far edge of the box to head back into the danger area.

Bromley were equally threatening from open play, with Reeco Hackett-Fairchild surging down the right and Nathan Ashmore had to be out smartly to stop a powerful shot.

Ashmore was beginning to redeem himself after the weekend when he touched a fine drive from the onrushing Billy Bingham round the post.

But Bromley were gradually turning the screw and it was little surprise when they opened the scoring on 18 minutes. Typically it was an ex-Fleet combination that did it as Luke Coulson ran through from George Porter’s pass and pulled the ball back across the six-yard box for Michael Cheek to finish from close range.

Fleet had a couple of half-hearted penalty appeals, John Goddard tripped on the line and Ayo Obileye seemingly pulled down while attacking a corner but neither was overly convincing, certainly not as far as the referee was concerned.

Bromley simply motored on, Porter drawing another decent stop from Ashmore who was powerless on the half-hour when Bingham showed great skill to turn Coulson’s cross into space for himself and he converted to the Fleet goalkeeper’s right.

The visitors struggled to make any real inroads in the home defence but did carve out their best chance six minutes from the break. Shields did well to keep the ball wide until he spotted an opening, crossing for Goddard whose shot was blocked in the six-yard box. Ugwu was on it but couldn’t get a clean connection.

The second half opened quietly as Bromley continued to press without too much threat while Fleet swtiched Shields to a more central role, Goddard occupying the left flank. Bromley’s lack of real threat lasted only until 55 minutes when Coulson intercepted Lawrie Wilson’s ball into Ugwu, raced upfield with just Ball back for the Fleet but hit a weighty shot wide.

Fleet’s best move of the match came just after that, Goddard ever the bright spot playing in the overlapping Aswad Thomas. His deep cross was a good one, finally getting behind the home defence and Weston got up well but his header just didn’t trouble Cousins.

At the other end, Ashmore kept Fleet in with a fighting chance when another Bromley corner to the far post wasn’t cleared and a shot through the crowd required sharp reactions from the goalkeeper.

Bromley looked liked they’d taken their foot off the gas but found another gear in the last 20 minutes. Twice Fleet trod on the ball in midfield, allowing first Cheek to rampage through and send a low shot along the line and back out.

The second time, on 73 minutes, Bingham swept onto the loose ball from Alex Lawless’ slip and let fly with an absolute screamer that sailed beyond a helpless Ashmore for the third goal.

It should have been four moments later when Hackett-Fairchild got up well at the far post to head down on the target but Ashmore made a superb low stop at the foot of his post.

With the result a foregone conclusion, Fleet tried for a consolation. Goddard and substitute Alfie Egan combined well on the break before the ball was robbed from Egan’s toes as he looked to release Weston.

But the consolation did come two minutes from the end, a corner helped on by Obileye, the post rattling and Thomas following up to prod the ball home.

But that was as good as it got for the visiting fans who face more tough upcoming fixtures in the search for the first points of 2019/20.

Ed Miller has been Ebbsfleet United's communications manager and programme editor since 2014 and responsible for the club website since 2007. Contact him on ed.miller@eufc.co.uk
PrevPreviousA short hop to close the gap
NextGarry Hill talks patience and pressureNext