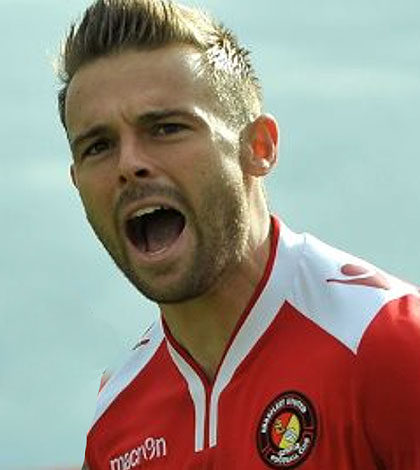 Fleet must wish they could travel to the league leaders every week having secured their first away win since toppling then-leaders Boreham Wood in early January.

It was also the first win over Bromley at Hayes Lane since 1998 and Matt Godden will take all the plaudits for what was simply a wonder strike that caught everyone in the stadium by surprise.

With Fleet playing in front of the Vanarama Conference South’s largest crowd of the season for the second week running, Jamie Day handed the No.1 shirt to Brandon Hall while also starting Dean Rance and Matt Johnson in place of Theo Lewis and the injured Danny Kedwell.

Fleet made a bright start straight from kick-off with Sean Shields racing away down the left and crossing towards Adam Cunnington but goalkeeper Alan Julian got there just ahead of him.

The home side almost took an early lead when Jamie Slabber’s shot was blocked and Fleet hacked the follow-up off the line. The clearance upfield saw Julian race out of his own penalty area to challenge Shields on the right touchline but the Fleet winger beat him to it. Julian raced back into his goal but it had caught the Bromley defence out of position and when Cunnington ran on to a pass and buried a shot from 20 yards, the home side had no reply.

The goal unsettled the Bromley defence and Julian was at odds with his central defenders whose headed clearances constantly fell short or were hastily despatched off the pitch. Five minutes after the goal Fleet almost made it 2-0 with Shields springing free to fire off a shot that struck the base of a post.

The high-tempo start from the visitors slowed from the 20-minute point and Bromley gradually settled, enjoying more territorial possession as the half-time whistle approached. Moses Ademola fired the first warning with a shot that was only just wide but Hall was yet to dirty his shirt. Shields again showed his class at the other end, dropping a shoulder and running beyond the static Bromley defence but his shot lacked the power to trouble Julian.

But the home side were pressing and a couple of corners kept Fleet penned back. On 35 minutes, Joe Anderson delivered a great cross onto Slabber’s head and he directed it across goal and into a gap outside Hall’s reach and Bromley were level.

Fleet were a little ragged for a spell and their passing was wayward but they saw the game out until half-time. The break appeared to have initially sent both teams to sleep as the opening period of the second half made for very poor viewing.

It began to open up from the hour mark, however, and Stuart Lewis did well to supply Cunnington inside the box but the Fleet striker’s shot was off target. Godden then had two efforts at Julian’s goal, the second diverted behind for a corner. It was one of three successive set pieces for Fleet and it kept the ball in the Bromley half for a spell. From that little bit of pressure, Fleet took the lead on 66 minutes but the goal was out of the blue.

Godden latched on to a ball 35 yards out and struck a fizzing shot goalwards. Julian appeared to leave it to fly over the bar as just about everyone else in the ground was expecting it to, but it dipped and hit the back of the net to the delight of the Fleet following.

It was then all about keeping the lead for the visitors. Hall played his part minutes later when he parried Ademola’s shot and then stopped Goldberg’s goalbound follow-up with a combination of hand and head. A flurry of substitutions from both sides saw time quickly tick down with the home side still pressing, Waldren’s lofted shot bouncing off the top of the crossbar on 72 minutes.

Nine minutes from time, Lewis did well to cut inside his marker from Godden’s pass and advance on Julian but the goalkeeper stood up well and pushed the shot away.

Still Bromley pressed and Ali Fuseini set up Goldberg for a chance that went wide. Kelvin Langmead did well with a great double tackle to deny Slabber before Fleet were reduced momentarily to 10 men when Tom Bonner departed the field with a nose bleed. Fleet fans grew incensed with the referee as Bromley were on the attack and he refused to allow Bonner back on, Ademola then almost carving out a chance with the Fleet a man down, but the shot went wide.

Seven minutes into stoppage time, the whistle finally came and Fleet bagged an excellent three points – which may yet kick-start a late charge for the play-offs.

Ed Miller has been Ebbsfleet United's communications manager and programme editor since 2014 and responsible for the club website since 2007. Contact him on ed.miller@eufc.co.uk
PrevPreviousGodden getting in gear for Bromley
Next“It’s time to kick on,” says DayNext