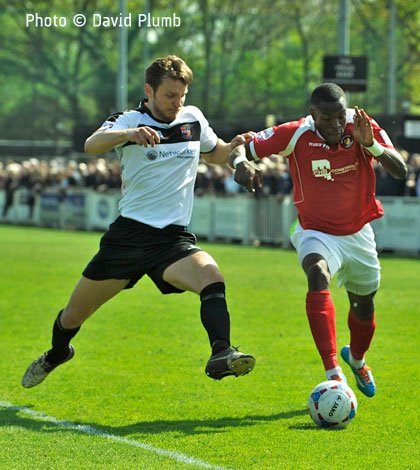 Ebbsfleet United booked a date with destiny – and Dover Athletic – on home soil next Saturday with the ultimate prize at this level at stake: promotion to the Conference Premier.

It was hardly vintage stuff at Hayes Lane as Fleet fell to a single-goal defeat but it didn’t need to be, with the four-goal cushion from the first leg proving much too much for Bromley to overcome.

Steve Brown made one change, Shane Huke getting a rare start since his return from injury in place of Osei Sankofa and alongside Anthony Acheampong, he was probably the team’s best player as Fleet frustrated Bromley in the final third.

Most away fans would have been happy with the opening spell as Bromley failed to start like the proverbial train and instead seemed content to get into a rhythm before launching anything resembling an onslaught on Preston Edwards’ goal. Fleet were more than pleased to contain Bromley but their passing game had seemingly been left at Stonebridge Road as balls went astray – which became a feature of Fleet’s game for the remainder of the match.

But when they did string a few passes together on 23 minutes, the visitors looked to have taken a crucial lead. Alex Osborn received the ball down the right wing, cut inside and delivered a cross into Ben May who struck it home – but apparently with his hand as the referee disallowed the goal and cut short the celebrations behind the goal.

That would have surely killed the tie off. Instead Bromley reignited it. Two minutes later, Joe Anderson hoisted a long delivery from the left-back position and Danny Waldren met it on the volley 15 yards out, striking it firmly beyond Edwards to give Bromley the lead.

That restored the belief in the home side and the onslaught the Fleet had feared in the opening minutes suddenly materialised. Louis Dennis down the left and Pierre Joseph Dubois just behind Bradley Goldberg kept the pressure on the Fleet who couldn’t dig themselves out of the deep line they were defending along. Goldberg twice went close and Osborn had to dig the ball out of a packed penalty area as white shirts sensed blood every time the ball went into the Fleet box.

Sam Higgings had the best chance on 38 minutes, driving a low shot at the target and Edwards did well to dive to his right to push it away at full stretch. The midfield battle was typified by long balls to nowhere and plenty of headed clearances and it really wasn’t a pleasant spectacle, with Fleet fans on the one hand nervous yet still commanding a three-goal lead.

Fleet weathered the storm until half-time and although the match barely improved in the second period, with time ticking away the visitors got on top of Bromley’s forward play and gradually came out of their shells. It took until the 53rd minute for Fleet to fashion out a corner and a decent chance, when Billy Bricknell’s shot from the edge of the box was charged down by Jack Holland.

Acheampong was everywhere for the Fleet at the back, mopping up countless crosses with his head and the one time Bromley did beat him, Edwards made a smart save from Waldren’s header. Higgins went down under Aiden Palmer’s challenge which roused the Bromley faithful in an appeal for a penalty, but there was little intent in it and the referee waved away protests.

By now Fleet were starting to build on their defensive prowess and venture forward, with Daryl McMahon driving a low shot just past the post and Cook following suit shortly after that. And with the minutes passing, Fleet’s anxiety lessened and Bromley seemed to accept that another three goals simply wasn’t going to happen. But rather than let Fleet coast towards Saturday’s final, the referee had other ideas. On 82 minutes, Rance dived in on Goldberg just inside his own half. Goldberg rode the first challenge but went down under the second, and the referee seemed to decide it was a straight red immediately with the clearly despondent Rance trudging down the tunnel in the knowledge he would miss the final against his old club.

Numbers were evened up two minutes from time when Holland received a second yellow for flying into Cook but it had long ceased to matter for Bromley whose fire had long since waned.

So, as fate would seem to have decreed almost from the start of the season, the one-off match for the right to play in the Conference Premier comes down to a 90-minute drama between the Fleet and Dover Athletic.

Once they get the Kent Senior Cup Final out of the way, of course…

Ed Miller has been Ebbsfleet United's communications manager and programme editor since 2014 and responsible for the club website since 2007. Contact him on ed.miller@eufc.co.uk
PrevPreviousFleet determined not to trip up
NextFleet boss mulls options for finals double-billNext