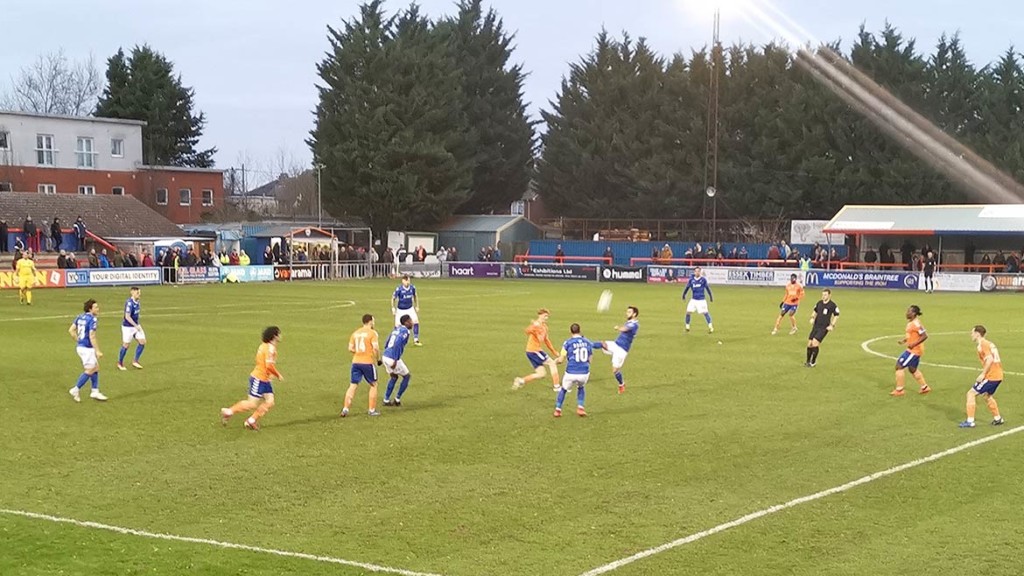 Fleet put four past Braintree Town for the second time in a week but on this occasion with no reply to make it three wins from three over Christmas and move within three points of the play-off spots. And they did it with the now-familiar quickfire start, opening the scoring inside three minutes as a change of strike partnership once again paid dividends.

Garry Hill made four changes, with Danny Kedwell having been suffering from flu dropping to the bench. That meant Cody McDonald started alongside Michael Cheek and there were also starts for Ebou Adams, Bagasan Graham and Lawrie Wilson, with Dean Rance, Corey Whitely and Myles Weston making way.

In unfamiliar white shorts to go with their blue shirts, Fleet got off to the perfect start once again to deliver a knockout blow to Braintree’s hopes of building on their win over Maidenhead. McDonald did well to win a corner out of nothing with a back heel and it was he who met Jack Payne’s set piece, getting just above the ball with his head to send it beyond Ben Killip for the opener.

Graham was bright in the left channel for the Fleet, his athleticism and speed of touch getting him beyond his marker on a couple of occasions. On 13 minutes he forced Killip into a save that resulted in another corner as the visitors enjoyed numerous such set pieces. The second goal came on 21 minutes via another corner, this one from the right side. Again Payne slung it across goal and Cheek got enough on his header to send it over the line, despite the best efforts of Justin Amaluzor by the post who should have hacked it clear but succeeded only in helping it in.

Fleet continued to enjoy a comfortable afternoon as Braintree’s best efforts were restricted to long-range potshots, lone striker Callum Morton looking forlorn against Jack King and Sam Magri. Twice Magri produced crucial interventions when the home side did finally threaten from the 30-minute mark and the Iron enjoyed a brief spell penning their visitors into the final third. Oscar Borg saw an effort deflected wide as Braintree earned a couple of corners and Courtney Richards shot wide of the target but there was little for Nathan Ashmore to do.

Fleet could have gone in 3-0 up when Chris Bush tricked his way past three defenders and found himself through on goal but the ball got away from him and Killip was able to get a hand in.

Braintree, encouraged by the end to the first-half and with nothing to lose, came out of the dressing room with more purpose and should have got a foot back in the game minutes after the restart. Borg for once broke the Fleet back line as he got in behind Wilson and with only Ashmore to beat and the home fans crying out for a shot, he inexplicably played the ball wide presuming a teammate was in space but it simply ran free and Bush was able to clear. On 54 minutes Lyle Della Verde’s effort flew narrowly wide as it skimmed across Ashmore’s six-yard box as Fleet struggled to get much link-up between midfield and the forwards.

Braintree brought Marcel Barrington on to offer Morton some support in attack and had they been able to continue to press then, it might have brought them some joy. Fleet, however, chose that moment to string together a decent move and as Adams cut into the box, he was upended by Ricky Gabriel for a penalty. Gabriel, who was fortunate not to see red at the Kuflink Stadium for a number of challenges on Adams, was booked as the referee caused some initial confusion by only a vague indication towards the penalty spot.

Cheek, however, wasn’t confused and he buried the penalty to the opposite side of Killip’s dive for his second of the afternoon against his former club and eighth goal of the season overall.

Any fight Braintree had to that point simply evaporated and Fleet went in search of some gloss for the scoreline. Graham had two chances to extend the lead, his first saved by Killip from a square ball courtesy of Adams and the second via an excellent Bush delivery, Graham’s shot again saved and Braintree somehow seeing the ball clear as it pinged around the box

Hill threw on Whitely, Rance and Freddy Moncur and it was one of the subs that finally got the fourth goal. It came on 78 minutes, Cheek easing clear from an inside left position and playing a low ball to Whitely whose intelligent but almost underhit back heel wrong-footed Killip and rolled over the line.

It could have been five when Rance left a cross from the left for Cheek to run on to and his shot went just wide. Braintree’s chances were few and far between, Cameron James’ volley from distance not troubling Ashmore but Ejiro Okosieme’s looping header requiring the Fleet goalkeeper to tip over the bar.

Fleet have scored 11 goals in three games over the festive period and sit atop various form tables with an improving goals-for and goal-difference column. It all augurs well for the months ahead, but Hill will have his eyes only on his side’s first ever visit to Chesterfield this coming Saturday.

Ed Miller has been Ebbsfleet United's communications manager and programme editor since 2014 and responsible for the club website since 2007. Contact him on ed.miller@eufc.co.uk
PrevPreviousHappy New Year!
NextCheek welcomes competition up topNext