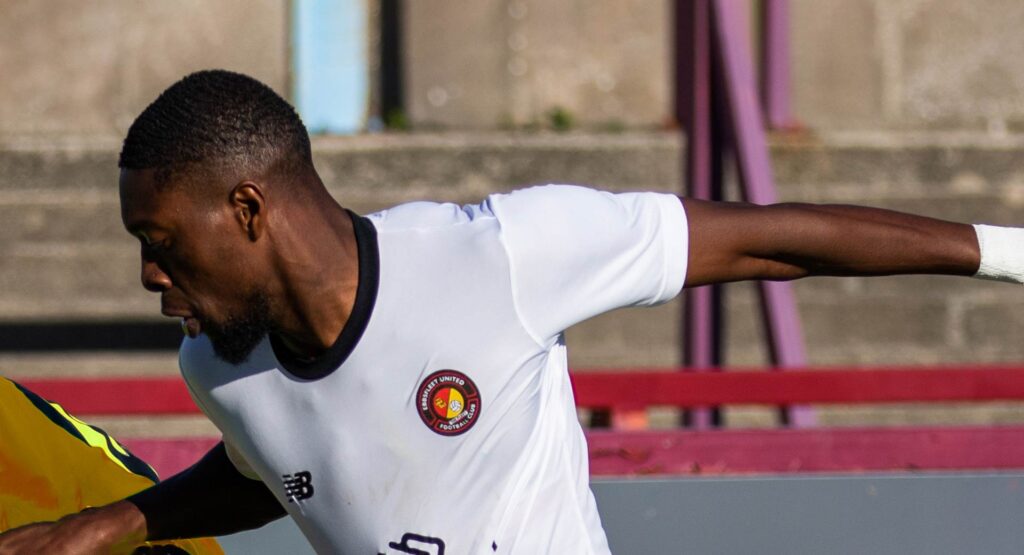 It’s four years since Fleet last won an opening-day game and kept a clean sheet – 4-0 v Poole Town – and we all know what happened that season!

There’ll be nobody getting ahead of themselves in the Ebbsfleet camp at this early stage but this was a convincing win nonetheless by Dennis Kutrieb’s men, with a slick second-half performance giving the visitors the impetus to seize the three points.

With a deluge of rain before kick-off, the pitch played surprisingly well early on as the manager made five changes, handing starts to Jordan Holmes, Sefa Kahraman, Charlie Rowan, Jack Paxman and Rakish Bingham.

And there was a familiar face attempting to keep them out, with Preston Edwards doing a turn in goal for the home side.

Fleet got into their passing stride quickly but the early exchanges were very much a case of both sides testing the other out. Kahraman hit one or two ambitious and inviting long balls, one into the channels for Chapman in particular managing a touch from Bingham inside the box.

Roles were reversed on 24 minutes as rain poured down once more, Bingham getting clear in space to divert a pass into Chapman’s feet inside the box but he stumbled before he could shoot.

Lee Martin was inches short of a Paxman pass into the penalty area before Will Wood found Bingham and his shot was on target but it cannoned off a defender.

Fleet continued to carve out half-chances and on 28 minutes a corner was dummied by Adam Mekki and Josh Payne, allowing it to run on to Martin but he curled it over from the edge of the box.

On the half hour Martin weaved in and out to extract himself from the Iron defence and his cross just evaded Bingham and Mekki. Braintree seized on it and counterattacked with purpose, Olu Olu’s shot smashing off his teammate Rohdell Gordon and looping over the Fleet bar.

Alfie Payne went close for Braintree again four minutes later, skimming a low shot through a crowded box and across goal from a corner.

Neither side had created anything convincing enough to warrant a goal in the first half, but while Fleet had largely controlled possession in the first 45 minutes, they channelled that to much greater effect in the second.

Jake Goodman replaced Rowan who had sustained a nasty looking nose injury and within 60 seconds, Chapman had beaten two men, skinning the left back and crossing into Bingham. His delicate touch sat up for Martin who smashed an effort past Edwards only to see it crash back off the bar.

On the right, Tobi Adebayo-Rowling was getting forward as much as possible and Wood’s contribution down the left was positive, too, the former Dagenham man’s strong running supplying Chapman with a cross that he couldn’t quite get away on 48 minutes.

Payne’s driven free-kick was gathered well by Edwards on 52 minutes before Holmes had a rare but routine save to make as Braintree spread play wide.

The opening goal arrived on 57 minutes courtesy of Kahraman’s corner, a feature of Fleet’s game that might have gone unnoticed but provided plenty of useful ammunition. This one was no exception, arrowed into the box and landing at Bingham’s feet, leaving the striker with an easy sweep of the boot to make it 1-0. Bingham might have had a second six minutes later when a smart, first-time cross from Chapman sat up for him but Edwards did very well to block that one.

Braintree enjoyed their best period of the game after Fleet’s opener but it was short-lived. Charley O’Keefe’s cross needed just a touch from Seye Okunola and Goodman had to make a crucial tackle in the box as George Borg’s side stepped up a gear but ultimately the home side allowed their frustrations with the referee to get the better of them.

Fleet regained control quickly and substitute Iffy Allen made some useful runs and incursions into the box. On 75 minutes, Martin was hustled off the ball from a useful position but Adebayo-Rowling followed up with a cross that was just cleared off Bingham’s toes in the six-yard box.

Another Kahraman corner invited a shot by Martin that was fired over on 81 minutes but Fleet got their second moments later and it was the pick of the bunch.

From deep in his own half, Kahraman hoisted a ball forward that picked out the run of Bingham between two defenders to perfection. The Fleet No.9 reached it and struck it smartly beneath Edwards for 2-0.

Two became three on 86 minutes as confidence soared through the visitors. Switching play quickly from right to left, Allen slipped a pass into Wood inside the box, he cut it back to Martin who finished high into the goal for 3-0. Three goals, three points and an encouraging if early second-place in the league table on alphabetical order!

Tom Hadler won the man of the match v Hastings United. Vote for yours v Braintree…

Ed Miller has been Ebbsfleet United's communications manager and programme editor since 2014 and responsible for the club website since 2007. Contact him on ed.miller@eufc.co.uk
PrevPreviousFleet face Chippenham in Cup
NextPreparation and workrate key for Kutrieb in first winNext