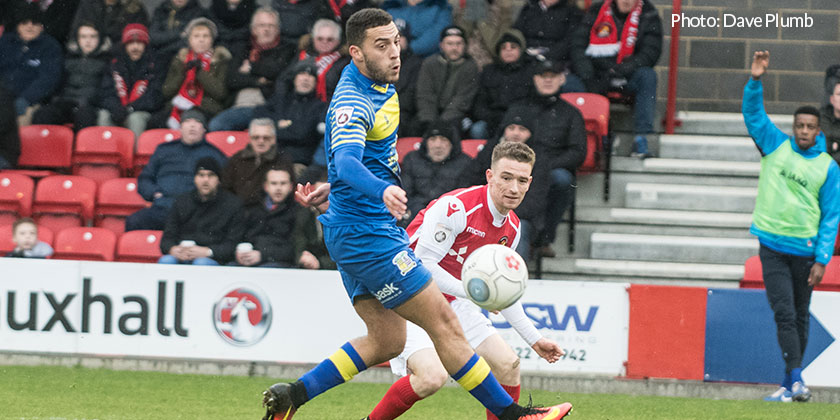 Daryl McMahon hailed team spirit after his side put an end to Solihull Moors’ run of good form and ended their own drought in front of goal. In his pre-match conversation, McMahon had noted that “great runs end as do poor ones” and he was right on both points this afternoon.

With the Fleet having come in for criticism recently, the manager rubbished suggestions his team were low on confidence and spirit. “The atmosphere’s been good,” he told BBC Radio Kent’s Charles Webster. “If you’ve seen from minute one to the end how hard everyone works, how together the players are and when the goal went in everyone’s celebrating… you can see what it means to the players. They’ve been brilliant for me and they’ve worked hard this season. We’ve had games where we haven’t hit our top form obviously, which will happen.”

McMahon admitted today’s game on a heavy pitch and in squally conditions at times was never going to be a classic but he was pleased with what he saw. “[In the first half] we had good opportunities with Jack Connors (pictured), we had Keds in there as well. We had enough little opportunities to capitalise. It was never going to be free-flowing from us in that first half. We were against a side with four wins and a draw in their last five, three good attacking players and you’ve got to respect that. They’ve brought in Storer who was the captain of the title-winning Cheltenham team two years ago. You can look at a league position and be fooled sometimes, they’ve changed their team. They’re far better now than when we played them earlier on in the season. In that first half we dealt with what they had well and I always felt we could kick on in the second half.

“I thought we gave a good performance in the first half in the sense of stifling them. They’ve got a good attacking three, we’ve gone the last two league games losing 3-0 so I think it’s important to get home with a zero and be competitive. We asked them second-half to kick on a little bit with the quality that we’ve got. We had a couple of good chances as well off the back of the goal.”

With the game stalled at 0-0 on the hour mark, McMahon introduced Luke Coulson and Andy Drury and changed his side’s shape. “When the game’s level, you’ve got players who are flexible to come on and change the shape straight away and give the opposition something different to think about,” he said. “It’s hard as a manager sometimes when someone changes shape during a half to react to that. We brought on two players that are not bad either.”

Coulson’s introduction in particular paid dividends and McMahon has challenged the former Barnet man to repeat his goalscoring feats through to the end of the season. “My biggest gripe, I just said it in there to Luke, is we don’t see it enough,” the boss said. “He’s super talented, and I mean super talented, and now he needs to really kick on from this because he can. He’s got real ability. It was a great goal. We see that goal every day in training, every day. It’s probably the first time we’ve seen it properly this season here. Hopefully that’s the catalyst for him to kick on.”

And in typical fashion, win or lose, McMahon wasn’t over-analysing the result.

“It’s football. We win today, we’re going to win the league. Lose next week, we’re getting relegated,” he said. “I find it boring. Where we’ll end up, we’ll end up. We’ll try and finish as high as we can, wherever that may be and if the players are as committed as they were today (and I’ve got no doubt they will be) then I’m sure we’ll have a positive end to the season.

“‘If’ is the biggest word in the English dictionary. Let’s enjoy today and get ready for Halifax next week and we’ve got Woking on the [following] Tuesday night.”

Ed Miller has been Ebbsfleet United's communications manager and programme editor since 2014 and responsible for the club website since 2007. Contact him on ed.miller@eufc.co.uk
PrevPreviousFleet 1-0 Solihull Moors
NextI’ve no loan phobia, says McMahon, as he eyes new signingNext