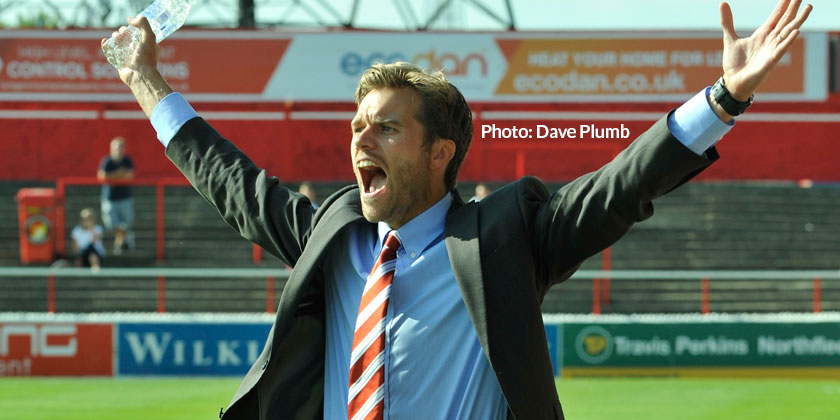 Daryl McMahon cut a happy figure as Fleet battled back from a poor first-half performance to maintain their unbeaten start to the season.

The Fleet boss claimed his side were doubtless the happier of the two sparring partners after Whitehawk let slip their two-goal lead.

“In terms of possession of the ball, they kept it really well, moved it quickly. They packed the midfield and were decent in the first half,” McMahon told BBC Radio Kent’s Matt Cole.

“That wasn’t a surprise though. Steve King does that at every club he’s been at and they made it hard for us.”

And the Fleet boss refused to take credit for a second inspirational half-time substitution after his two replacements scored in the second half.

“The players that we brought on are good players,” he said. “You just make a judgement and bring people on and they can go on to prove me wrong cos they’re on the bench.

“It just felt wrong, it didn’t feel like it was working, what we were doing. That’s why I did it at half-time, I didn’t think there was any time to waste, we needed to get it done.”

McMahon felt that while his side were second-best in the first half, it was Whitehawk who were the more shell-shocked by full-time.

“I thought we were excellent second half. We had numerous chances and I think we created a lot more chances in the second half than Whitehawk did in the first. We tested their goalkeeper a lot more. For us it feels like… not a win, but we’ve come back from 2-0 down to 2-2. I’m sure it’ll be different in their changing room than it is in ours.”

And he had a word for the two goalscorers, with Danny Haynes lifting the crowd and Matt Godden scoring his third goal against Whitehawk in two games.

“I don’t think Haynesey is fully fit yet. He’s been unlucky as he’s not been able to get the minutes as the other lads have played so well. But you can see today he took his chance with both hands. He’s trained ever so hard, so has Matty Godden, and they both got their rewards today.

“Danny Haynes is exciting. He’s a little bit off the cuff, he’ll get you off your seat. He gave us that excitement today. Having him on the pitch gets the crowd going. Willmott was excellent second half as well, putting a number of very good crosses in and again that gets the crowd off their seat, chanting and gets them behind us.”

Ed Miller has been Ebbsfleet United's communications manager and programme editor since 2014 and responsible for the club website since 2007. Contact him on ed.miller@eufc.co.uk
PrevPreviousFleet 2-2 Whitehawk
NextClark & Co. focus on claiming local bragging rightsNext