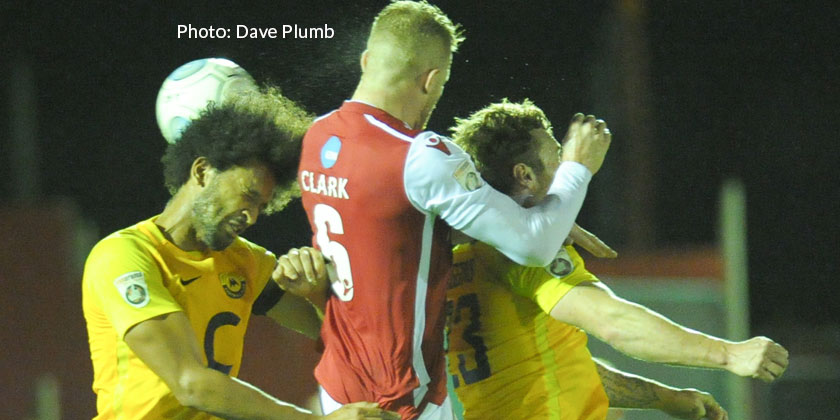 Bodies on the line for Sutton showdown

There’s not quite so much riding on this visit to Gander Green Lane as the last time this fixture occurred, with Sutton United all but mopping up the National League South title then, but with the top spots in this season’s league still very fluid, three points is a plum prize.

For the Fleet, a reaction to Tuesday night’s disappointing defeat at home to Torquay United is the minimum requirement and Daryl McMahon says his players will need to put their bodies on the line. Yet despite that defeat, McMahon’s side are still third in the form table and it’s that the manager will hope to focus his players’ minds on rather than the “bad day at the office” against the Gulls.

Febian Brandy is likely to make the squad following his signing last week. Although his clearance came through in time for Tuesday’s match, McMahon didn’t want to throw him straight into the action. “There was no need straight off,” he said. “We wanted to get him another couple of days’ training under his belt rather than throw him in to a game before he’s even got his foot in the door, but hopefully Saturday he can play some part.”

The two clubs may have had a year’s respite since their previous meeting but McMahon believes they’ll each know exactly what to expect.

“We know Sutton very well, we know Paul Doswell very well and we know it’ll be a fight,” he said. “They’ll be direct, they’ll win seconds, they’ll get it wide and put crosses into the box and you’ve got to have some balls when you go to Sutton. You’ve got to go and put your body on the line, win headers and tackles and if you don’t show up in football matches, you won’t win your football matches.”

It is 15 years since Fleet have come away from anything at Gander Green Lane (or the Knights Community Stadium as it now is), a 1-0 win in front of 689 fans sending us a step closer to promotion. That gate has grown exponentially since then – the U’s are pulling in excess of 2,000 on a regular basis and Fleet fans will need to make themselves heard.

Sutton’s recent form has been similar to the Fleet’s over the past six games, picking up 10 points to our 12, though they are unbeaten in that time. Their last reverse came at Woking in mid-September while Maidenhead and Maidstone are the only two sides to have taken all three points from Surrey.

For Sutton, Jack Powell’s England C teammate Louis John – who spent a brief period on loan at Stonebridge Road last season – is showing some real form. He is one of six Sutton players to survive from our last meeting, with only four Fleet players from that game likely to feature this weekend.

It is two squads who have strengthened considerably since that 2016 meeting, with Sutton having recruited three players from Dover in the close season (though one of those, Moses Emmanuel, has departed to Maidenhead on loan). Elsewhere, goalkeeper Jamie Butler has come in from Hemel Hempstead Town while midfielder Kenny Davis, signed from Boreham Wood, was a regular opponent of the Fleet’s in his Braintree days.

Striker Tommy Wright has emerged from Sutton’s fringes this season as top scorer and last season on loan with Salisbury he netted 50+ times. Alongside him, 36-year-old veteran Craig Dundas – who appeared to be winding down his career in Sutton’s title-winning season – has found a new lease of life and started 11 league games this campaign, with four goals returned.

But as ever it’s the spine of Sutton’s side that Fleet will have to nullify if they want to take points from this clash. Nicky Bailey, Jamie Collins and Craig Eastmond were outstanding performers in Sutton’s National South side and the visitors need to shackle Bailey and Collins, though Eastmond sustained an ankle injury last weekend so is facing a spell on the sidelines.

Sutton are five points clear of the Fleet and only three off the top spot which they have occupied at times this season. Manager Paul Doswell echoed McMahon when he told SUFCtv: “We know Macca really well, and Steve Gritt. I really like Ebbsfleet as a club, good support and a good ground. A real good chairman who has done the infrastructure as well as helped them. We get on very well with them. We’ve always had tight games, they tend to beat us at their place, we tended to win at ours. I think both teams try and play and they have some very experienced players.”

Crowd segregation will be in force at Sutton and Fleet supporters must use the Collingwood Rec turnstiles. Away supporters are welcome to use the club’s social facilities before kick-off but should then re-enter the stadium via the car-park turnstile. All spectators are reminded that stewards will be conducting bag searches at the turnstiles and also that drums are not allowed inside the stadium.

Ed Miller has been Ebbsfleet United's communications manager and programme editor since 2014 and responsible for the club website since 2007. Contact him on ed.miller@eufc.co.uk
PrevPreviousPitch incursions harming club
NextSutton United 0-0 FleetNext