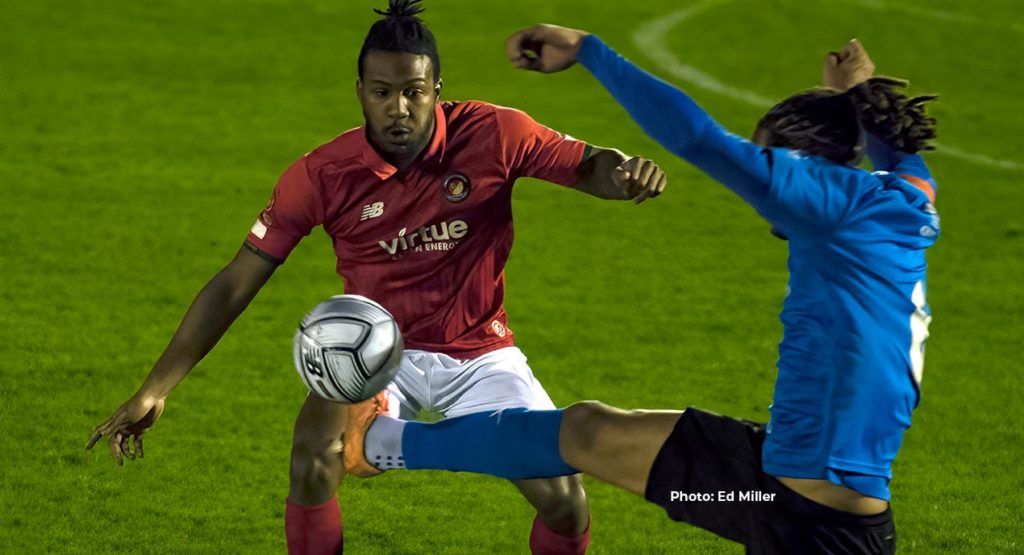 Billericay held the Fleet to a goalless draw, only the home side’s second single-pointer of the campaign thus far, and the Essex side defended well to blunt Kutrieb’s forward line.

With new goalkeeper Rhys Lovett earning the plaudits between the posts for the visitors, it was ironic that it had been a position Billericay struggled to fill all season until their new man’s move from Maidenhead United.

“This Billericay was not the Billericay from the beginning [of the season],” the Fleet boss said. “They’ve had 40 players already involved and this team is much better, they’re very good, experienced players. Of course we wanted to win the game but it was tough. We had the same last season when we came back from the Covid situation, a tough game against Havant and we lost 3-0. Today it’s a 0-0, of course we wanted a better result but at least we had a clean sheet.

“But we had enough chances. They defended all together and tried everything not to concede and threw bodies on the line, blocked shots and everything else. They defended with 10 players in their own box, but it doesn’t matter how many chances you have, when you want to win games you have to score goals.

“We expected a tough game. Everyone knows we’re in a tough period with self-isolation and Covid and we suffered. When you’re off a little bit longer and have to play a game very shortly it can look like it looked [in the] first half, a bit rusty. The second half was much better.”

Kutrieb’s never been one to prefer postponements over playing matches when scheduled, whatever the weather or situation, and he was clearly frustrated by the lack of activity for his side over the festive period.

“For us it’s always better when you can play because the boys are used to playing,” he said. “They’re not used to sitting at home for 7-10 days. When you sit at home it’s tough to come back and play one day later but that’s the situation we are in, we have to deal with it and that’s what we do. If we play games then at least we don’t have to play so many games in a short time like we had a few weeks ago – you could see even with three games in hand, it doesn’t mean anything. I hate postponed games, I don’t like them at all as it’s always tough when you play later. I always like to play the games when they are [scheduled to be] on so I’m happy that we could play today even though it was a draw.”

And even though the one point was not the result the Fleet boss wanted, he’s positive his side can up the tempo once more for the visit of Dartford on Sunday.

“I saw a few good things today, even if it’s a 0-0 draw,” he said. “I can’t stand here and say everything was not good enough. The first half was not good enough because we should have created more chances but the second half you need to score one of the chances.

“When you are back from a self-isolation period you need to get back on track and that’s similar for Dartford, similar for us and maybe for other teams in the league as well. We can recover now and prepare and at least we have five more days and we should look better in five days. That comes with time – we didn’t have the time today because we had just one day in training and we had to go again. Now we have five more days but as always I’m positive. I’m looking forward to the game because it’s a great game with many fans, it’s a big derby. It’s a great game for everyone, for us, for Dartford and the fans – so let’s go for it.”

With 2021 now behind the Fleet, Kutrieb reflected on a year once more affected by Covid. And even if clubs’ efforts continue to be hampered by new variants, the manager is at least thankful the fans are permitted to stay in their rightful place in stadiums.

“I said four to six weeks ago when no-one was talking about [Covid] and they were saying ‘No, it won’t happen again’ but straight away we’re in the same situation as we were one year before. The only different situation at the moment is that fans are still allowed which I really appreciate because you could see they tried so hard to help us again today and make something happen. But we have to deal with it.

“[In the New Year] we just keep going and working hard. Again today you could see that it’s not about lacking effort, it’s not that they don’t want to win or they don’t take it seriously or think they can win easily. We had the same at Chelmsford, we had enough chances to score and that’s what we had today. When the boys are working hard during the next year then I’m not worried as you get the results over a period when you work hard and when you do it honestly.

“I don’t take it for granted like I’ve said many times before. It’s always tough, it’s demanding, the players have to be on the front foot, they have to be composed. Even in the first half you could see there were so many situations and occasions when we played out from the back and it was much better than a few weeks ago. They improve every week and if the results are the right ones then we’re happy. Today we’re not happy because of the result but the way the boys played, I can’t moan at them.”

Ed Miller has been Ebbsfleet United's communications manager and programme editor since 2014 and responsible for the club website since 2007. Contact him on ed.miller@eufc.co.uk
PrevPreviousFleet 0-0 Billericay Town
Next£99 for 11 in ’22… half-season tickets go on sale!Next