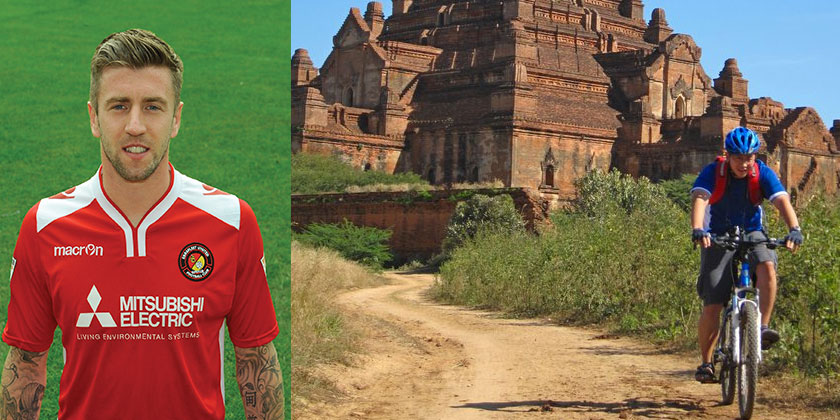 Blazing saddles: Pooley prepares for the off

Fleet wave goodbye (temporarily!) to Dean Pooley this week as he embarks on the Mitsubishi Electric Burma Cycle.

And Fleet’s assistant to the general manager has revealed how training with the squad and getting back on to the pitch this season helped prepare him for the rough terrain of Burma/Myanmar. “The way we train at the club, which the fans won’t see, is incredible,” Dean told FleetOnline. “The way Macca has everyone drilled, the fitness levels are incredible – you should see how hard the boys work day to day, it’s fantastic. So when the call came to play over Christmas, I wasn’t too far off the pace.

“And with getting back on to the pitch, I had the Mitsubishi ride in my mind as well, even though it’s a different kind of training. It was about getting my hip right, too, after my surgery on it. I didn’t want to jump into the bike ride cold and do damage to my hip long-term. So the squad training has helped me and I’ve hopefully ended up helping the team through a tricky period as well.”

Dean’s eager to get started on what he describes as the experience of a lifetime. “I’m gone for 12 days, riding for six, then three days in Bangkok at the end, which will be good PR for Mitsubishi and Ebbsfleet too. We’ll take some shirts out and things like that. I’ve never been out to that part of the world and I cannot wait.

“All my cardio exercise has come from training with the squad; I’ve just got a spin bike set up in the front room and am trying to get used to sitting on a saddle, getting my body conditioned to doing that for that long. It’s not flat out like the Tour de France but it’s going to be tough – the guys who’ve been before said it’s enjoyable – but the conditions are 35° C and it’s hilly terrain. Plus it’s 16 Mitsubishi employees and one from Ebbsfleet so I’m sure they’ll stitch me up!”

To help Dean on his way and help him break £5,000, you can sponsor him via this link. Funds are accepted for up to eight weeks after the conclusion of the challenge. Save The Children will benefit and the £68,000 raised so far by Mitsubishi Electric can go a long way: £55 buys emergency shelter for a family; £1,725 covers the cost of a mobile clinic; and £2,999 provides equipment for a Child Friendly Space where more than 25 children have access to a safe place away from the harsh reality they face.

Good luck Dean from all at Ebbsfleet United!

Ed Miller has been Ebbsfleet United's communications manager and programme editor since 2014 and responsible for the club website since 2007. Contact him on ed.miller@eufc.co.uk
PrevPreviousAcademy game venue switched
NextFleet to host Q&A eveningNext