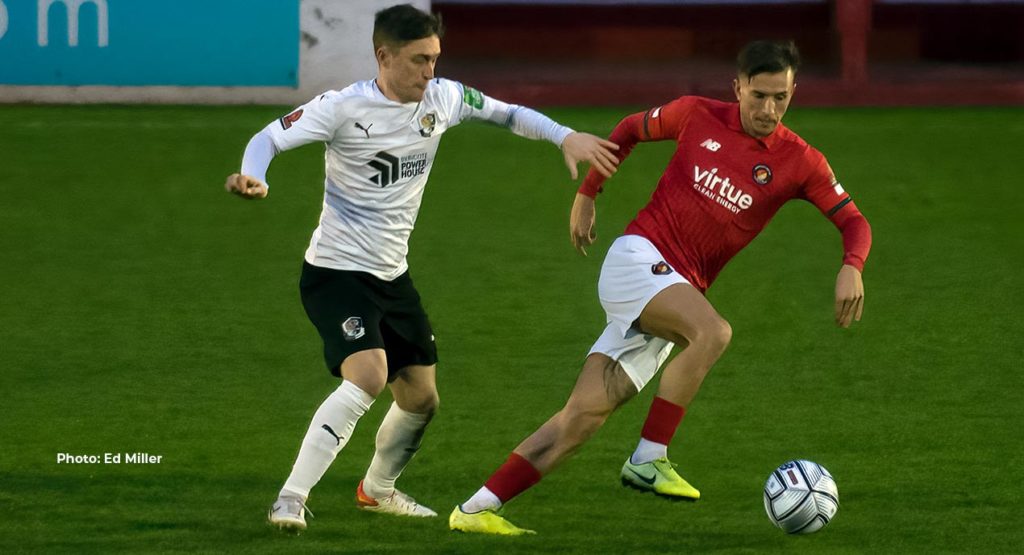 Goalscorer Ben Chapman celebrated his 23rd birthday on New Year’s Eve but admitted his only focus across the week was on lacing up his boots and taking on Dartford. And the versatile Chapman might have been forgiven for accepting a late birthday present in the form of the winning goal but instead he dedicated that to the Fleet fans – and his manager for the advice to push further forward late on in the game.

“One hundred percent we knew this game was for the fans,” Chapman told BBC Radio Kent’s Matt Cole. “We played for them, it was all for them and my goal was for them and for the club itself. So I’m over the moon and I hope they are as well! [The ground] was packed and I could hear the fans from the warmup to the end of the game and the applause afterwards and that was amazing.

“The credit should go to the gaffer, he said ‘Come on, get forward go and do what you do, drive and be powerful’ and then we’ve got the win!”

Chapman scored Fleet’s equaliser against Hastings United back on the opening day of the 2020/21 season and cracked in a couple of pre-season efforts too but his outings in defence this campaign have naturally meant fewer opportunities to find the net.

“I’m not well known for scoring but I’ll take that any day of the week!” said Chapman. “I’ve shouted Tobi’s ears off to reverse that ball in and it’s a great weighted pass, just easy for me put it straight through the keeper’s legs. The boys will tell you [I do it] a lot in training because I like to shoot. I don’t practice it too much but when the opportunity is there I’ll put it away.”

Fleet now visit Hemel Hempstead and as far as Chapman’s concerned, it’s a case of continuing to create the chances his side conjure up each and every game.

“Everyone’s going to have their chances but [against Dartford] I felt like we defended well. And we always create chances no matter what. The way the side plays football and the way the manager just drills stuff into us, we’re always going to create and literally every game it’s a moment of time before we’re going to score.

“It was so important [to beat Dartford], probably two of the best teams in this league both going for promotion and I think we worked our socks off in the first-half and were unlucky not to score in the second before my goal.

“Now it’s a great position to be in, you’re not going to moan about that after Christmas and so we’re just going to take it game by game. We know what this league’s about, keep doing what we’re doing and the results will come together like they are.”

Ed Miller has been Ebbsfleet United's communications manager and programme editor since 2014 and responsible for the club website since 2007. Contact him on ed.miller@eufc.co.uk
PrevPreviousPoleon praises graft and goals spread
NextDartford visit rearranged for February 1stNext