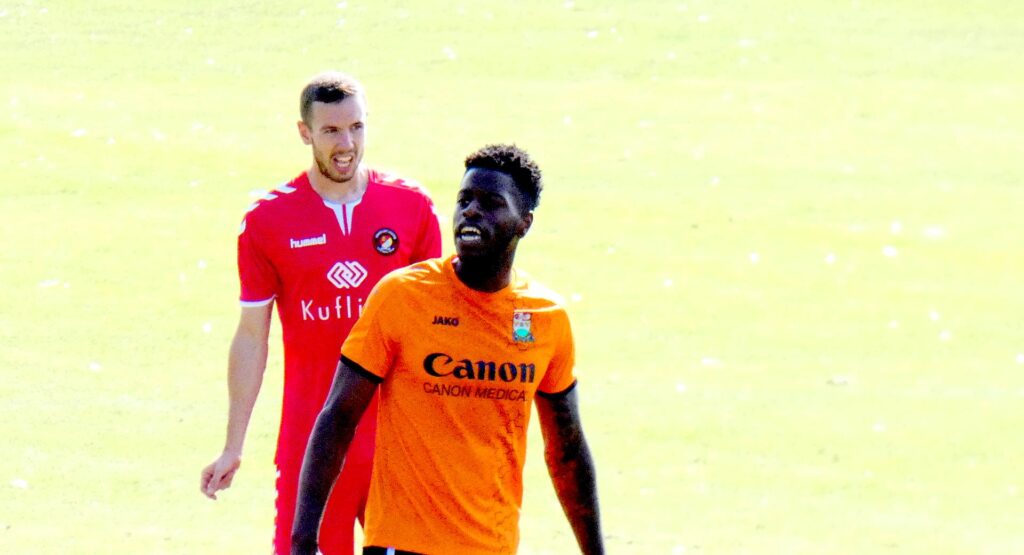 Goals in either half saw the spoils shared at The Hive on Wednesday afternoon as Fleet travelled to Barnet in another behind-closed-doors warm-up game.

It wasn’t quite The Hive that Fleet had been used to in the National League, however, the game played as it was on an adjacent training pitch to the stadium.

Under a hot sun for the 1.00pm kick-off, Dennis Kutrieb opted to keep his two trialists on the bench for the first period, with Sefa Kahraman, Ben Frempah, Adam Mekki and Rakish Bingham the only starters from the previous game v Aldershot.

Barnet were quick into the action and took the lead four minutes in, Ephraim Mason-Clark making the most of a strong run into the Fleet defence, before firing hard and low past Jordan Holmes.

But the visitors refused to let that setback rattle them and with Josh Payne leading the way with some determined midfield drive and Frempah eager to play the ball out from the back, the Fleet’s attempts to respond were met with a well-organised Barnet defence.

West’s corner was touched over the bar by Scott Loach before Payne’s raking pass to Tobi Adebayo-Rowling was crossed first time towards a stretching Bingham.

Adebayo-Rowling had a sniff of another opening on 12 minutes but his low delivery was cut out by Ben Nugent.

The two sides traded a couple of free-kicks but the remainder of the first-half was played out largely in midfield, Payne afforded space to pick out his long and searching diagonal passes but Barnet’s defence was tight when it came to the ball into the middle.

Holmes had to watch a 37th minute header carefully and tip it over the bar but it lacked the power to trouble him before Fleet got themselves back in the game.

The equaliser came six minutes before half-time, a 10-pass move eventually cleared by Barnet before Fleet built again as they enjoyed a lot of the ball in that period. Chapman and Adebayo-Rowling exchanged passes on the right before Chapman worked his way inside, spotted the merest of openings and curled a delightful effort around the Barnet defence and into the corner of the goal from just outside the box.

Fleet ended the half with Payne’s attempt from a free-kick flying just off target.

The visitors made two changes for the second half before wholesale changes followed just past the hour mark.

Holmes had to be off his line quickly straight after the restart to deny an incursion into the box and he got a strong fist to a similar effort from Josh Walker three minutes later, punching a shot behind.

Fleet did well to block the subsequent pair of corners and Holmes was still in the thick of things on 58 minutes when he got down well to Walker’s free-kick. Former Bromley man JJ Hooper scooped the loose ball into the net but it was disallowed for offside.

But the two did combine to regain the lead for the Bees on 61 minutes, Walker battling past Kahraman to cross low for Hooper to side-foot home at the far post.

As in the first-half, Fleet’s patience was rewarded again in the second-half following a raft of substitutions. A strong run down the right on 74 minutes by Reece Grant was cut out for a corner. Bobby Joe-Taylor hoisted that into the box and Jake Goodman shrugged off the attentions of his marker to position himself for an excellent glancing header away from Loach and in for 2-2.

Taylor and Allen combined well to break down the left on 82 minutes and Taylor’s well-weighted cross found Alfie Egan but his shot was charged down.

Greg Cundle might have won it in the final minute for the Fleet when he ran on to Jack Paxman’s through ball and did ever so well to hold off the attentions of a defender, his shot zipping across goal and just past the foot of the post.

Barnet had a couple of half chances of their own before that one but it was honours even as Fleet showed they’d built on their previous friendly and move on to their next one with just over two weeks until the real thing kicks off.

Ed Miller has been Ebbsfleet United's communications manager and programme editor since 2014 and responsible for the club website since 2007. Contact him on ed.miller@eufc.co.uk
PrevPreviousSafe return of spectators
NextHighlights: BarnetNext