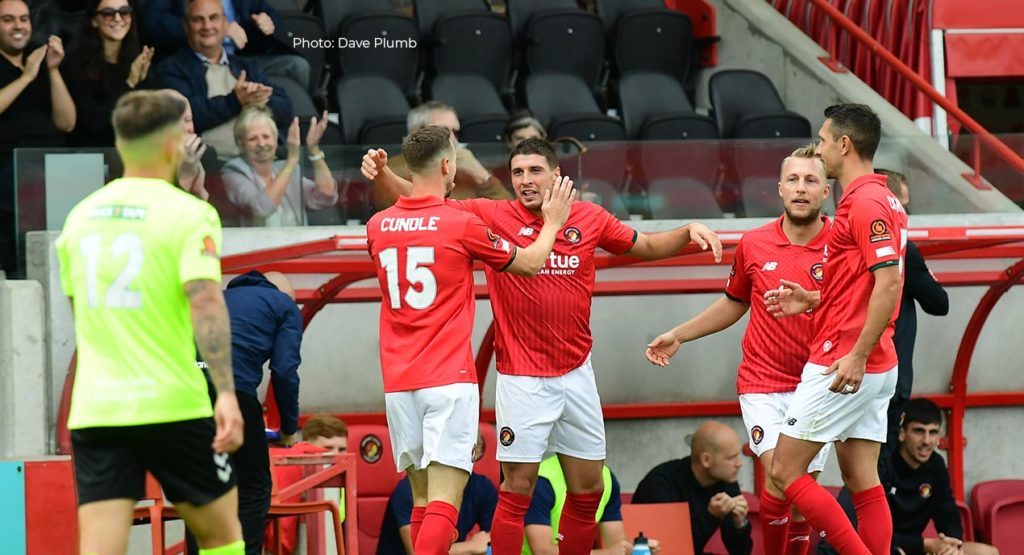 Dennis Kutrieb took the win, the three points and the relief and immediately laid them to one side as he got straight to work for Monday’s first away visit of the season to Chelmsford City.

Fleet fans make their first away trip since the one to Halifax almost 18 months ago on Bank Holiday Monday and their manager will take the few intervening hours between games to fine-tune his side’s approach.

“The most important thing is that we get the win,” Kutrieb told BBC Radio Kent’s Charles Webster (see full interview above). “As a manager you’re straight away on to the next game so it’s not for me the same like two weeks ago where I could really celebrate because I have in my mind the Monday game. It’s only hours to recover. So I’m relieved and happy to get the three points but nothing else.”

With his side 4-0 up at half-time in the opening game of the season, it was understandable for excited Fleet fans to crave more early goals but even amidst that excitement, everyone knows that won’t happen each game.

“We can’t expect we have the kind of ‘party’ every week like we had against Tonbridge,” said Kutrieb. “We can’t expect to win every game in the first half, you need to settle in and see where the weaknesses are from the opponent, where you can hurt them.”

Four changes to the team that beat Tonbridge was something the Fleet boss contemplated ahead of 180 minutes in two games coupled with a few knocks to some personnel.

“We try to plan for both games,” he said. “We need to manage the players and that was one reason why Paxman was off after 65 minutes because I already have in my mind that I need him on Monday as well. So that’s my job to find the best for both games, it’s what we planned during this week and the reason why we had some changes. It’s OK to say I rotate a little bit or a little bit more but at the end of the day you need to get the wins and if you change too much, sometimes it can be a problem.

“Chelmsford are a good opponent. They won at Bath, it’s not easy to win at Bath, so they will come back with much confidence. We know they’re much more physical, they have two good strikers up front. They are always dangerous and can be a big threat so we need to be prepared for this game. But we will be prepared because we’ve already made our plans for both games, so there’s nothing changed because of the game today.

“With the running track, the ball is away for seconds so is not on the pitch like it is here, so there’s a completely different approach from today. It’s the first time we’re away so not as many supporters there as today. To have the fans is always good and when we struggled a little bit today, they were there for us straight away

Ed Miller has been Ebbsfleet United's communications manager and programme editor since 2014 and responsible for the club website since 2007. Contact him on ed.miller@eufc.co.uk
PrevPreviousFleet 3-1 Hemel Hempstead Town
NextSkipper sees teammates blossoming around himNext