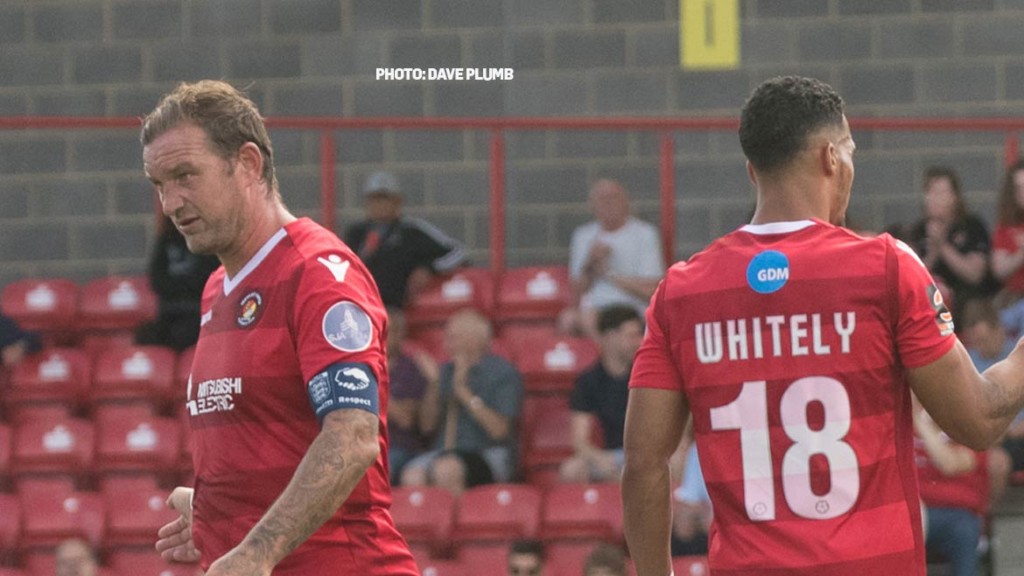 At 35, I can still do it says Kedwell

Danny Kedwell ran his socks off through another 90 minutes against Chesterfield and vowed he’s still got plenty in the tank — even if he’s on the protein shakes to help.

“It was hot, especially the first-half, but we’ve been in Portugal in this heat and training in this heat so we’re used to it,” Kedwell told BBC Radio Kent’s Charles Webster. “That’s why I’m drinking these protein shakes. Hopefully this works. I don’t know how it worked before but suddenly all this new stuff comes out and they give it to me, so it must be working because I’m still playing!”

Fleet’s 2017/18 top scorer turned 35 yesterday, the day after he saw some competition from Michael Cheek enter the building. The two ended the game together up front and Cheek was greeted on to the field of play for his debut with a warm high-five from Kedwell.

“He’s a good player,” said Kedwell, “and hopefully he’s the new era of what I’ve achieved and he’s 26 so he’s got a long time to go. I’m sure he’ll do Ebbsfleet proud and will do well this season. But I’ll always go until someone tells me to hang them boots up in there. Until that day I’ll keep going. I think I played 47 [lots of] 90 minutes on the spin at 34 – so at 35 I can do it still.”

As to the game, Kedwell echoed his manager’s frustrations about chances created but not converted.

“It was very frustrating,” he said, “especially the chances we had today, a lot more than they did and it just weren’t our day. So there’s frustration to lose the game by a penalty as well. Apart from one chance they had just before that, it’s all they had.

“We had a chance at the back post when Weston smashed it and it just hit me in the head, I didn’t see it coming. On other days they go in. We had loads of chances outside the box. We must have had six or seven good chances, and I think normally we hit the target and we didn’t today. With the quality we’ve got in our team, we’ve got to start at least hitting the target. I could have had two today but it’s not one of those days.”

One statistic that Kedwell did chalk up was his first booking of the season. It appeared he might have received it for dissent, but the No.9 dismissed that idea, saying he was mystified why it was awarded for a supposed foul.

“You’ll have to ask the referee, I don’t know. Literally, first tackle, I was nowhere near and he’s booked me. It was a funny one but I think it just sums our day up.”

Ed Miller has been Ebbsfleet United's communications manager and programme editor since 2014 and responsible for the club website since 2007. Contact him on ed.miller@eufc.co.uk
PrevPreviousWe needed a goal quickly but it never came, says boss
NextPREVIEW: Leyton OrientNext