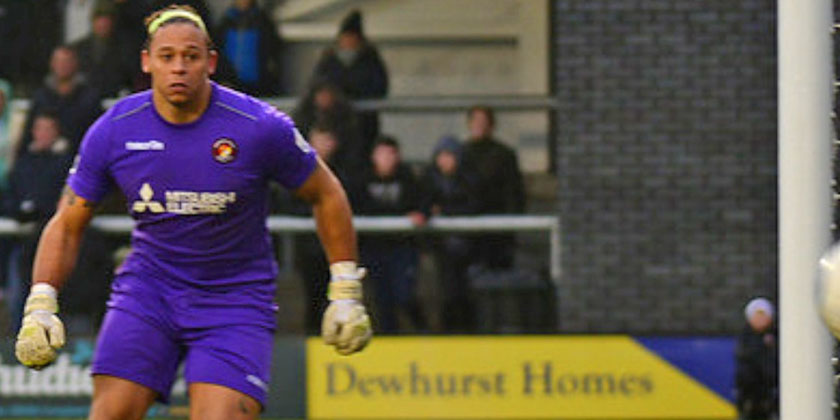 Ashmore: a shame we couldn’t do it for the fans

Nathan Ashmore took centre stage at Prenton Park in a pulsating play-off semi-final but two goals in extra-time from James Norwood and Larnell Cole proved the difference between the Tranmere strikers and the Fleet goalkeeper.

And the club’s player of the year was gutted for his teammates and the fans.

Ashmore and his colleagues certainly gave it a good go, however. Leading twice against the league’s impressive runners-up and then pushing them to extra-time, the keeper knew how close his side had come.

“I feel like we could have nicked it,” he said. “Especially going 1-0 and 2-1 up. But they scored a couple of good goals and the third goal has absolutely killed us right before half-time in extra time. The extra time on Wednesday did really kill us and they were always going to penetrate us, they’ve got a good strike force with 40-odd goals between them. If you keep them quiet you might have a chance.”

While exhausted as a squad, Ashmore believed his team were capable of springing the surprise they so desperately desired.

“In all fairness, if you can’t get up for this game, there’s no point playing,” he said. “In front of 10,000, against a good side, they are very strong, but we’re always going to back ourselves to the limit. But I think it did take a toll, the actual time did kill us a little bit, especially playing the Wednesday, the extra-time and penalties. Not only physical, but mentally as well.

“We’ve been on an unbelievable run, we always back ourselves, even coming here. It’s intimidating but we said if we go 1-0 up or keep a clean sheet in the first 15-20 minutes, they won’t have much to throw against us. It’s just gutting really. We believed we could do more but we always said a Top 10 finish and then after Christmas see where we are. Obviously we went on a run, one game at a time and just kept winning, not losing and we drew a few. We just kept that momentum building.”

And what next for this Fleet squad? Ashmore believes this season’s experiences can only help the club progress but he says he and his close-knit teammates need to rest and look back on the past nine months of achievement.

“[The spirit] is unbelievable,” he said. “The lads would do anything for each other, we’ve got that never-day-die attitude. We spend every day together. We train together and we all get on well. Not only do we train but we do other stuff together so it’s always good to have a bunch of lads that you can trust.

“We’ll have time to rest and reflect and we can say that we’ve had a tremendous season. I think everyone wrote us off, no-one expected us to be anywhere near the play-offs and everyone thought we were going to lose on Wednesday. It is credit to the lads. We can only build on this. We need a good break and we’ll come back fresh.”

Ed Miller has been Ebbsfleet United's communications manager and programme editor since 2014 and responsible for the club website since 2007. Contact him on ed.miller@eufc.co.uk
PrevPreviousTranmere Rovers 4-2 (aet) Fleet
NextWe’ve built a club to be proud of, says Fleet bossNext