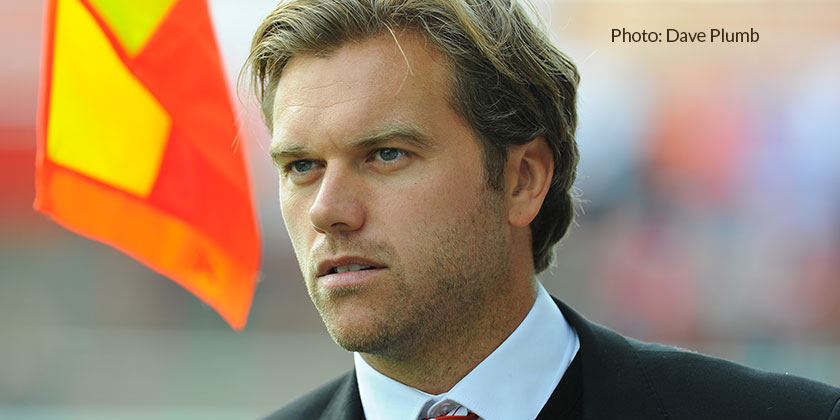 April’s never boring where the Fleet boss is concerned

Daryl McMahon goes into the final week of the season with plenty still riding on his side’s remaining games. And it’s hardly new territory for the Fleet boss who as both a player and a manager rarely seems to have a dull final month.

Whereas most playing and management careers are punctuated by numerous ends of seasons with little to play for, McMahon has rarely been left twiddling his thumbs as the campaign climax approaches. Since he won promotion with Leyton Orient in 2005/06, the Fleet boss has been involved in Stevenage’s FA Trophy-winning run (2006/07), their unsuccessful bid for the play-offs in 2007/08 and then with Cambridge for their run to the play-off final in 2008/09.

In 2009/10 he won promotion with Farnborough and the following season made it to another play-off final with the Hampshire side. 2012/13 saw yet another play-off campaign, reaching the final with Dover as he did again with the Fleet in 2013/14. Even in Fleet’s abortive season of 2014/15, McMahon was still engaged in the promotion hunt through March and April after his move to Boreham Wood. And then, of course, as Fleet boss he has gone into April in each of the last two seasons with a title race and play-off campaign to negotiate.

Now, 12 years on from that first promotion campaign with Leyton Orient, the Fleet manager is fully involved to the last week of the season once more as his side travel to Gateshead looking for three points that would earn a top-five place ahead of 2017/18’s final game.

“It’s something that was mentioned last week,” McMahon said of his penchant for April promotion campaigns. “In my playing and management career so far we’ve always been in and around the meaningful places with something to try and achieve which is always enjoyable instead of you having nothing to play for. But that was then – now we’ve got two games to try and achieve something this season. Here and now it’s about focusing on the Gateshead game doing what has made us tick and worked for us.”

Fleet’s third visit to the International Stadium undoubtedly carries more weight than either of the previous two. And it couldn’t be in sharper contrast to the club’s last away trip against Gateshead in 2013 (though that took place at Middlesbrough’s Riverside Stadium) when an already relegated Fleet side made what many fans thought might be the last ever away visit.

Fleet have won both of their outings at the International Stadium (in 2010 and 2012) and that’s the hoped-for outcome this time as well, though McMahon knows his side will have to find more rhythm than they did against Sutton. While a point would be enough to see Fleet leapfrog Dover, it would leave us relying on other results next Saturday should Bromley pick up three points at home to Barrow on Tuesday night.

“Gateshead have done really well under Steve Watson since he’s gone there,” said the Fleet boss. “They got to the semi-final of the Trophy this season as well. They’ve got some good, attacking players. and they’re at home. We’ve seen them quite a lot in recent weeks and it’s two tough games now. It’s a busy week and we’ll do over a thousand miles going to Gateshead and then down to Torquay but we’ll embrace it.”

Sean Shields faces a fitness test after his injury but otherwise Fleet have no new injury concerns with 180 minutes of the regular season remaining. It will be a much-changed side from the one that drew 0-0 with Gateshead at the Kuflink Stadium earlier in the season, however, with Magri, McQueen, Mambo, Payne and Graham all either injured or out on loan.

Gateshead are coming off the back of a 3-2 defeat in Kent on Saturday when Dover’s late rally condemned them to their second successive reverse. At home, however, it’s been a rather different story and Gateshead are unbeaten since losing to AFC Fylde in February, one of only two defeats at the International Stadium in 2018.

Currently in 14th place, the Heed could finish 12th but it’s still some way short of the play-off target set by their outgoing chairman at the start of the season. Nonetheless, they are a resilient side with one of the best home defensive records this season and they were the first team to stop Fleet scoring in almost a year earlier in the campaign.

Danny Johnson is their leading scorer with 10 goals but McMahon also named former Guiseley attacker Jordan Preston as one to be wary of in a side that boasts much the same scoring and defensive record as ourselves this season. Manager Watson has a fully fit squad at his disposal.

Ed Miller has been Ebbsfleet United's communications manager and programme editor since 2014 and responsible for the club website since 2007. Contact him on ed.miller@eufc.co.uk
PrevPreviousDeserved awards for Fleet duo
NextGateshead 2-5 FleetNext