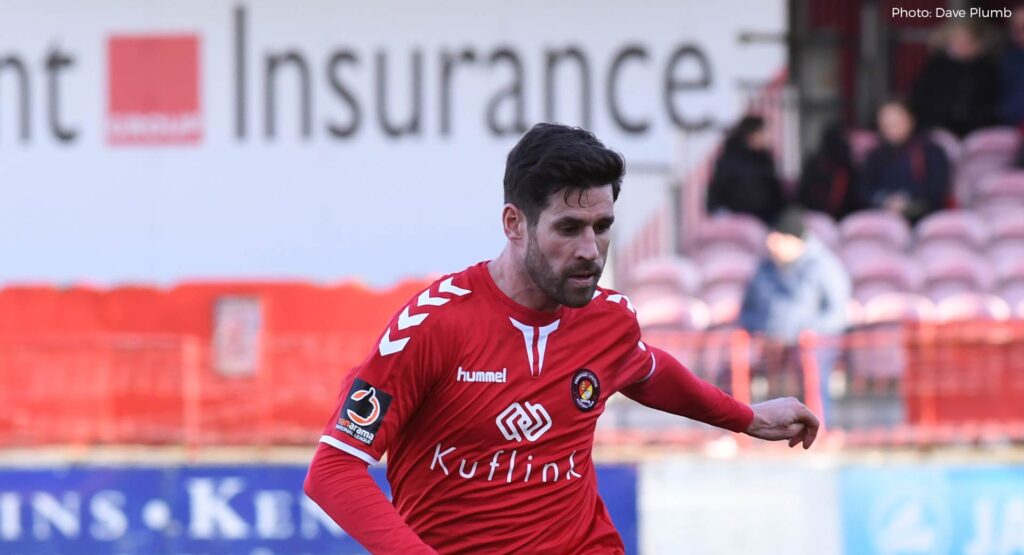 “An extremely hard decision” as Timlin moves on

Michael Timlin will not be returning to the Kuflink Stadium for the 2020/21 season as he moves on to take up “the only option that would have seen me leave Ebbsfleet”.

The 35-year-old midfielder says he would have doubtless agreed terms with the Fleet but for another opportunity he couldn’t refuse – and even then it was a major decision for him.

“It was an extremely hard decision and I want to make absolutely clear I don’t say that lightly,” Timlin told the Fleet website. “I don’t want people to think I’m leaving for any reason other than it’s a personal opportunity for me, an option that was on the table for about a year but when I was playing at a higher level, I didn’t think I’d get it. It’s not something I can say too much about at the moment but it involves linking up with someone I’ve known since I was young and were it not for this, I’d have been an Ebbsfleet player.

“I thought this was a club I’d found where I could progress as a player and move into coaching. The foundations are really being put in place here and I really wanted to be part of that. Knowing the people at the club, all those behind the scenes from Damian to Peter and Maggie Danzey, I felt I could grow into the club and be part of it even though I was only here for a couple of months.

“It’s not a case that Ebbsfleet haven’t given me what I needed because they gave me exactly what I was looking for. This move is purely down to a personal situation and I feel I would have regretted not taking the opportunity in front of me and I couldn’t walk away from that.

“But at the same time I am disappointed not to be able to develop myself at Ebbsfleet. Normally you have one good opportunity and one not so good so it’s easy to choose but in this circumstance, both offers were something I could have leapt at.

“It’s a shame because I felt I had more to give Ebbsfleet and it was just the tip of the iceberg what I’d done so far.”

And while Timlin won’t now be a part of any resurgence, he’s confident the Fleet will start to see the benefits of this summer’s regrouping.

“I think Dennis Kutrieb will do really well,” he said. “He’s a shrewd guy, he’s got good ideas and that’s another disappointing thing for me because it would have been nice to learn from a coach coming from abroad. I think Ebbsfleet are in great hands. I’ve had such good conversations with the club over the past few months. I can’t thank Damian Irvine enough, Steve Lovell, Kevin Watson for bringing me in and Dr Abdulla too who has brought about the change in the club and brought me here as well.

“Ebbsfleet fans should be confident and looking forward to what the future holds with all this in place. I think what Damian wants to make happen at the club and how its run will leave Ebbsfleet in a much better situation. The relegation, maybe you need to look at it like it’s a step back to take two forward.

“I want to wish the fans and the club all the best. They were all fantastic to me, especially that evening I came upstairs after the [Stockport] game. That was a great idea to get supporters in there and I’m sure you’ll see a great community club coming to fruition.”

Timlin’s contribution in minutes may have been less than he’d hoped last season but his professionalism, infectious character and influence had a big impact behind the scenes. And when he did play, it coincided with the positive results that ended the season.

“My start was frustrating, not being involved in the games, so I tried to do as much as I could off the pitch and in training and from the sidelines in games,” Timlin explained. “I think I came into the team at the right time. It seemed like it all started falling into place – even though we were running out of time rapidly we went into matches with real intent. It was fine lines – beating Maidenhead, losing to Stockport then getting six points from the last two games. I genuinely think we’d have won a couple more games – I’ve been involved in promotions and relegations and it felt like being in a squad fighting for play-offs, that we could take anyone on. It was good to finish on TV and winning it against one of the better teams in the league. The more the lockdown drew on I think we were confident it would be decided on position, not PPG, which is frustrating because we drastically turned things around in the space of two months.”

Timlin’s opinion on the club’s signings this summer – both those announced and yet to come – should be music to supporters’ ears.

“It’s fantastic to see Josh Payne stay,” said his former midfield colleague. “I’d like to see him make Ebbsfleet his home now and really cement himself here, where perhaps he’s not had the chance under other managers. He’s a very good character and he’ll thrive at a club he can embrace. Alfie Egan’s impressed me, I’m glad to see him stay. He just needs to start playing a number of games regularly and I think people will start to see he has potential to get back in the League.

“And there are a couple of signings I’m sure will be announced this week that Ebbsfleet fans will be excited about. It’s encouraging the players that are coming in and I think you’ll hit the ground running.”

It’s not just Fleet fans who will be sad to see Timlin go… so will his mum!

“I’ll keep an eye on the club definitely. My mum has just moved from Peckham to Ingress Park [in Greenhithe] so she was hoping I’d stay so she could come to the games! I’ve got some good friends at the club to be keeping in contact with and with football you never know what’s around the corner.

“For me, for the future, I still feel as though I can play for a number of years. I’m probably the fittest I’ve ever felt and you’re always told to play for as long as you can. But by the same token, you have to snap up coaching opportunities quickly too so I’m hoping I can do both and I’m looking to do my A Licence.”

Everyone at Ebbsfleet United thanks Michael for the huge amount of work he put in on and off the pitch since his arrival and we wish him the very best for his new opportunity.

Ed Miller has been Ebbsfleet United's communications manager and programme editor since 2014 and responsible for the club website since 2007. Contact him on ed.miller@eufc.co.uk
PrevPreviousMatch Rewind v Notts County, 2003
NextMekki makes Ebbsfleet return journeyNext