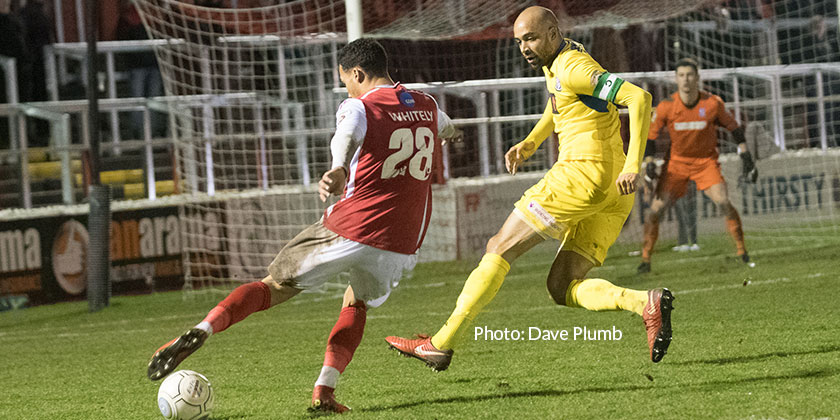 All Whitely on the night, says Fleet boss

“He played really well, I thought he was excellent,” McMahon told BBC Radio Kent’s Charles Webster. “He’s a threat, he’s a ball carrier. He’s got pace, he’s got ability. He’s a very, very good player at this level of football and I thought he was a constant threat the whole game. Obviously he’s been in the building four, five days and I expect him to keep on getting better and better and I’m sure he will.”

Whitely hit the post in the first half in a display full of energy and confidence and his manager thinks that’s only the start of what the former Enfield man can offer.

“What I like about him is he’s effective so he gets crosses in, he gets shots away,” McMahon said. “We’ve had a few that can do some tricks but can’t score a goal or cross it properly and he can do it. He’s very effective in the final third and he makes things happen.”

The capture, finally, of Whitely’s signature will have vindicated McMahon’s unhurried approach to the transfer market and the Fleet boss is adopting the same steady policy towards the club’s next signing, one the manager hopes still to make.

“We’re still actively looking if we can get another one in,” he confirmed. “As I said for the last month, it is difficult and we will get the right ones in. We’re not going to be pushed, we’re not desperate, we’ve three wins on the bounce. The player that comes in has got to be one that affects my eleven like I’ve been saying the whole time.”

The 13 players who stepped on to the pitch on Tuesday night all came in for praise from McMahon, who has seen a real spirit amongst his squad after a January that might have proved more trying for some teams.

“I thought the whole team played well,” McMahon enthused. “I don’t think we had a player today that could come away, and anyone who came on either, who didn’t perform. Everybody’s been excellent the last three games and we don’t get too high, we don’t get too low. Everyone’s delighted. We performed particularly well today and I thought we were very, very good today and unfortunate not to maybe get some more goals.”

Ed Miller has been Ebbsfleet United's communications manager and programme editor since 2014 and responsible for the club website since 2007. Contact him on ed.miller@eufc.co.uk
PrevPreviousGood vibrations keep Keds in the mood for goals
NextFinal call for remaining match sponsorshipsNext