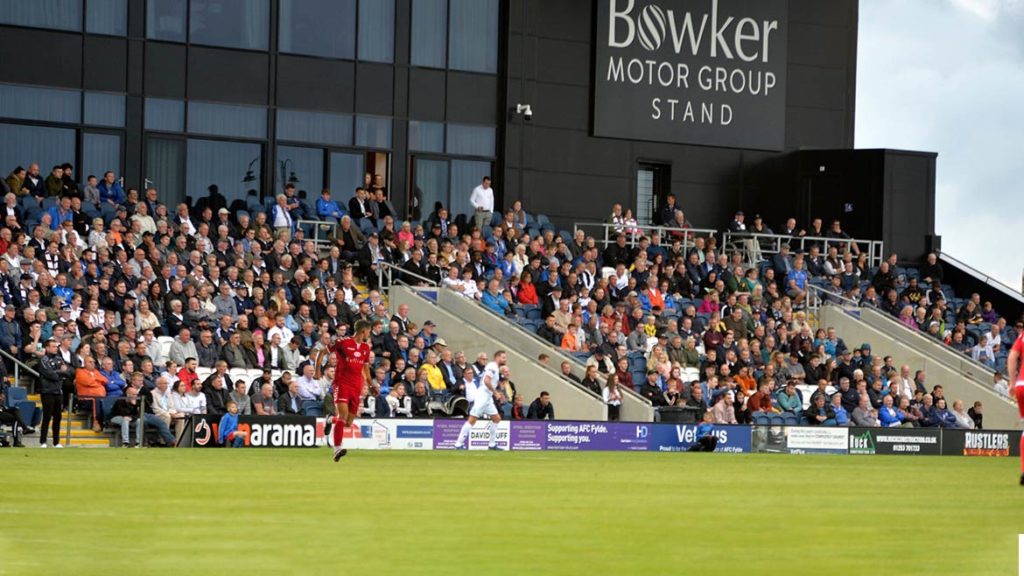 Fleet may still be waiting for their points account to register a plus, but there were plenty of other positives on show as there was nothing between the pre-season title favourites and the bottom club bar Danny Rowe’s early penalty.

Indeed Garry Hill was disappointed not to take three points and his side certainly had a case for at least one as they created a number of chances and played with much more belief than in the opening two fixtures.

The manager resisted the temptation to bring in his two new men and they sat on the bench as Jack King returned to the fray, alongside Josh Umerah, meaning Myles Weston and Sean Shields stepped down.

In blustery conditions, Fleet might have hoped to frustrate the Coasters, who had registered a blank in their previous home game, but they got off to the worst possible start. Mark Yeates’ corner was whipped in and struck Ayo Obileye’s hand for a penalty inside four minutes of the whistle.

Danny Rowe registered yet another goal against the Fleet as he sent Nathan Ashmore the wrong way from the spot and any plans the visitors had to stifle their hosts were in tatters almost immediately.

Buoyed by that, Fylde tried to play the ball along the ground to unlock the Fleet and hope their opponents might cave in after such a start but the visitors gradually fought their way into the game.

There was an equal count of corners for both sides with the wind tending to exaggerate or nullify the set pieces depending on the way it was blowing. That meant the goalkeepers had to be on their game and Ashmore’s concentration was tested in the first half, with the Fleet No.1 having to be out quickly for Scott Duxbury’s low delivery and then get up to Luke Burke’s shot to tip it over.

But the home side were becoming a little frustrated as their attempts to play football were ruined by overhit passes and over-elaborate build-up. James Ball had to mop up when King and Jamie Grimes miscommunicated over a clearance and James Craigen came for a short free-kick to launch it just wide.

Once Fleet got their first genuine sight of goal, they looked a lot more confident. That came on 26 minutes when John Goddard’s shot was well struck and curled away from the target with James Montgomery looking none too sure about his chances of getting to it had it been an inch more straight.

Umerah and Gozie Ugwu were linking well and proved a physical handful for the home defenders. The pair both had half-chances on 30 minutes when Umerah’s shot came swirling back from the goal to land for Ugwu but he fired over.

Fleet upped the corner count as the first half ebbed away and Josh Umerah floated an effort across that smacked off the crossbar eight minutes from the break.

Umerah had two more chances, a shot deflected wide and then right before half-time he was on to a bouncing ball from a corner but Montgomery was impressive to get low enough to keep out what seemed a certain equaliser.

Just before that, Ashmore had continued to earn his corn when Craigen thudded a shot towards the top corner and the Fleet keeper was again on top form to tip it over, Fleet having to scramble clear from the resulting set piece.

With the wind behind them in the second half, Fleet were perhaps reluctant to overuse the direct balls forward. And the break seemed to have taken the sting out of both sides as it was a more scrappy affair than the opening 45.

Fleet continued to probe for an equaliser, however, and it wasn’t for the lack of effort that they were denied it.

There was an early scare when Ashmore had to divert Yeates’ delivery from wide but the game didn’t really open up again until well after the hour mark.

Fleet tried to use their big men to bully Fylde into submission and they looked to make every set piece count. Weston’s introduction on 65 minutes was almost the catalyst for an equaliser when he got his weight behind an excellent shot from distance that Montgomery had to be equal to.

Goddard went close again before Fleet’s second substitute, Brandon Thomas-Asante, combined with Weston to force Montgomery into another stop and Neill Byrne headed off the line.

Fylde weren’t without their own chances, Obileye needing to deny a rampaging Rowe and susbstitute Kurt Willoughby roughing up Grimes to win a dangerous free-kick, but they looked to protect the three points as Fleet mounted one last rally.

Hill threw on Bondz N’Gala in an advanced position to try to force Fylde’s back line into surrender but push as they might, Fleet just couldn’t quite pick the lock.

Ed Miller has been Ebbsfleet United's communications manager and programme editor since 2014 and responsible for the club website since 2007. Contact him on ed.miller@eufc.co.uk
PrevPreviousCan Fleet create trouble at Mill?
NextThat was like our first game of the seasonNext