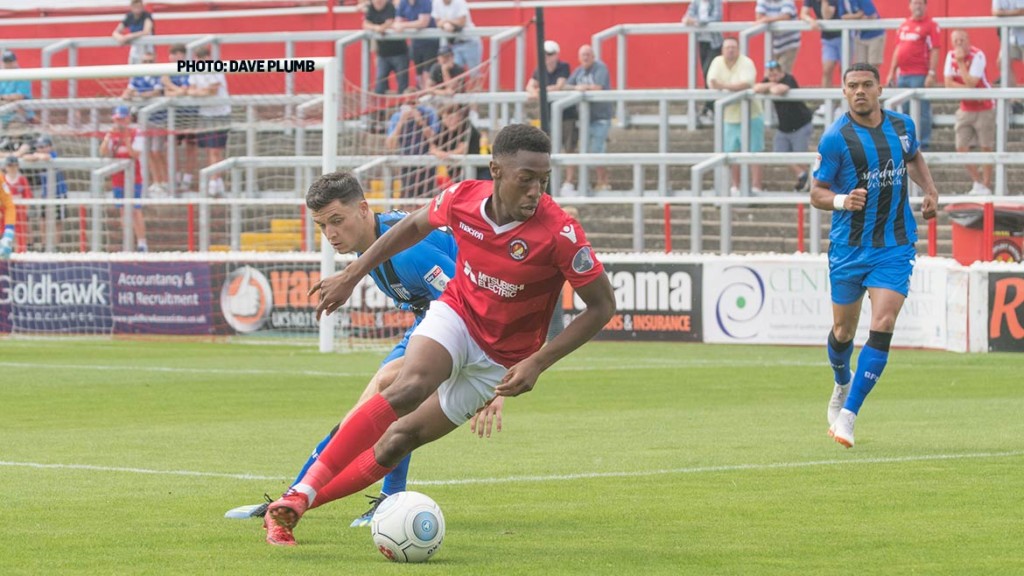 Adams: “I feel this is the right club for me”

Wonder-goal hero Ebou Adams is loving life at the Kuflink Stadium so far as he lit up his new home with a super strike in the 2-0 defeat of Gillingham.

The 22-year-old midfielder was modest to a fault after scoring his second – and what a second! – goal of pre-season.

“It was good build-up play and to finish it off how I did was really good,” Adams told BBC Radio Kent’s Charles Webster. “To see it go in the back of the net, to go top corner, is a relief. It was good to play against the Gills, a League One side, a performance like that from the lads was really good. The build-up play was one-twos and in and around – and that’s how we are, that’s how we want to play. We play neat and nice football, quick, as the goal itself showed from the build-up.”

Adams’ modesty is characteristic of a down-to-earth player who’s simply looking to improve and learn, something’s he’s done ever since his bow at National South level.

“My first start in the league was against Ebbsfleet,” he recalled, “and I thought I did alright … well, I got man of the match! Ever since then I’ve kept myself grounded and worked hard and it’s paid off so I thank Dartford for playing me and giving me the chance.”

Since arriving from Norwich City, via a loan spell at Leyton Orient, there’s been plenty of debate about the player’s choice of club but Adams himself has no doubt he’s in the right place.

“I’m enjoying myself here and I’m enjoying the team and management, ” he said. “They’re all looking after me. I’ve not regretted it for one moment. Since I walked into the club [everyone] has been welcoming and that’s what you want as a new player, to come in and settle right in. That shows literally in how we’re playing football, really well and I’m not regretting it at all. I’ve come here to build myself, become a better player and enjoy myself and I feel this is the right club for me.

“It’s our target to go as far as we can and finish better than we did last season so hopefully it’s one step further.  My target is throughout the whole season to get more goals, to get in the box, get in and around it. I’m box-to-box so I love to defend and I love to attack. That’s the target, to get a lot more goals next to my name.”

Ed Miller has been Ebbsfleet United's communications manager and programme editor since 2014 and responsible for the club website since 2007. Contact him on ed.miller@eufc.co.uk
PrevPreviousFleet 2-0 Gillingham
Next“We’ve signed them because they’re good”Next