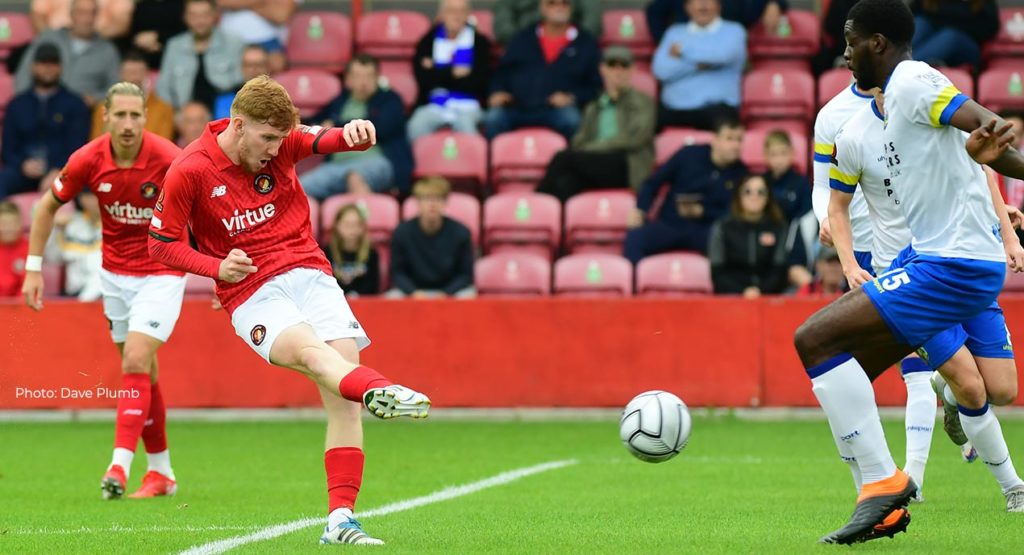 A tough ask after that start, says Fleet boss

You don’t give strong opponents head starts was Dennis Kutrieb’s takeaway after Saturday’s first defeat of the season, though the Fleet boss praised his players for their response and desire to get back on level terms.

“If you make mistakes and the opponent is good enough to punish you for easy mistakes then you go down one or two goals,” Kutrieb told BBC Radio Kent’s Matt Cole. “From there, I think we did really well. After 10 minutes we were in the game and I’m proud of the boys because they put so much effort in. You can lose this game easily 3, 4 or 5-0 after you go two goals down but they fought the whole first-half to come back in the game. Then we get our goal, we’re back in it and then wait for the second one but unfortunately it didn’t happen today.”

“It’s a tough one to take because I think we played a very good game. I was happy with the boys again, the efforts, they put everything in and they fight as a team. They try to help each other but in a big game you can’t sleep in the first 10 minutes, if you do it’s tough as we could see.

“The first goal, I don’t know if we slipped or whatever, I need to watch it back on the video but you can’t concede such an easy goal.”

Fleet’s goal, Lee Martin’s second of the season, was a well-worked example of one-touch movement and it was the perfect springboard at the right time to come back into the match… but it didn’t quite pay off in spite of all the second-half efforts.

“It was a good goal,” said Kutrieb, “but at the end of the day when we look in the newspaper tomorrow, there’s nothing about what a good goal it was. It’s one goal but we lost the game 2-1 so no-one cares about a good goal. You suffer a lot when you’re in the dugout, Monday was the same – that’s the only thing I don’t like in football that you need to suffer too much in a dugout. As a player you have always the feeling, ‘I can do something’ but when you’re not on the pitch, you have to wait until they put the ball in the back of the net. Unfortunately it didn’t happen but I can’t pass the blame to my boys because they tried really hard. It was the toughest test for us [so far]. We didn’t come through today but I’m very sure we will come back stronger and better.”

The Fleet have impressed many this season with their style of play and Kutrieb stresses that must come with a focus on getting the three points.

“We need to be aware that we don’t lose the focus because the focus is winning the game, not playing some nice patterns or playing a little bit of nice football. When you look at the table, that is what matters most and we need to make sure that even if we play nice stuff, at the moment we need to make clear for everyone that the most important thing in football is to get the three points.”