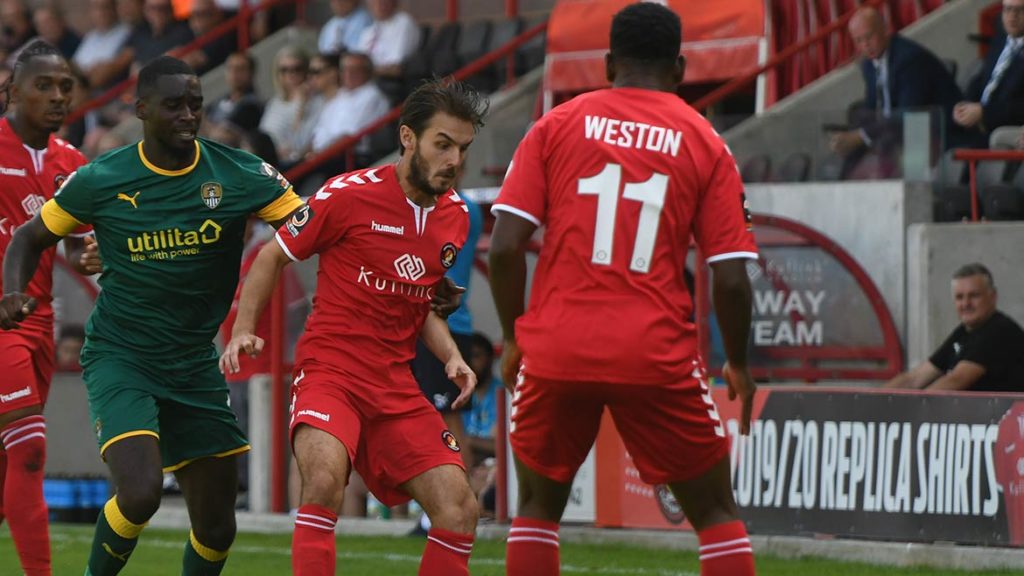 A Shot at redemption

Fleet will be looking for their first win at the Kuflink Stadium this season but line up against an Aldershot side desperate not to allow themselves to be leapfrogged by Garry Hill’s men in a weekend that sees two clashes between sides in the bottom five.

The boss has long believed that a couple of wins would change the whole complexion of the league table and the ambition this Saturday is to climb out of the bottom four altogether – something that many observers considered something of a tall order before the Fleet got their first point on the board six days ago.

The draw with Notts County and subsequent win over Boreham Wood has sent a renewed belief coursing through the team, though in Hill’s view that belief has never waned.

“Being fair, the boys have been very good anyway,” he said. “There’s no negativity, we’re in it together and we know new players have had to come into the club. But I think we’ve seen on a consistent basis – Fylde away, Solihull away, Notts County and now Boreham Wood – we’ve been improving.

“We’ve got those last two results and we know it’s another tough game on Saturday but we’ve had a break to prepare. We’re going to try and build. From one point to three points, a draw’s turned into a win and hopefully that will turn into another win. But we know we’re not going to get anything given to us and if you don’t get [points] on the board quick it becomes a long, hard winter. I’m confident we will move up in due course.”

A win over Aldershot would see “due course” happen more quickly but the Shots – much like Boreham Wood – haven’t been beaten by much this season.

Their one win on the board was an impressive one – away at league leaders and local rivals Woking – and while Danny Searle’s men have struggled to come by results since, they’ve been close-run things. Aldershot avoided defeat in the final minute of their game against Sutton on Monday and previously lost only narrowly to Solihull Moors and AFC Fylde. A draw against high-flying FC Halifax Town provided their other point.

As has been the case in both their last visits to the Kuflink Stadium, the Shots arrive with a few injury doubts. Former Fleet favourite and skipper Dean Rance missed Monday’s game, as did ex-Maidstone defender Alex Finney, his back-four colleague Ollie O’Dwyer and midfielder James Rowe. Meanwhile, striker Jacob Berkeley-Agyepong came off the bench on Monday to score the late equaliser with suggestions he was not fully fit either.

Both these clubs looked upwards to the EFL as they contested the play-off eliminator in 2018, but since then it’s been other matters that have concerned fans. Aldershot have, of course, been relegated and reprieved. How much this has affected former Braintree boss Searle’s pre-season plans is open to question but either way he has had to rebuild from the ground up.

Searle has also recruited a couple of players from his old club Braintree and one or two bright young things from the leagues below. But what the Shots seem to be crying out for is a striker who can convert the chances they have created, with the visitors having failed to score more than once in a game this season and – like the Fleet – have a defender (George Fowler) as top scorer. Alongside Chorley and Eastleigh, they are also the lowest scorers currently in the division.

It’s been two years since the Shots last beat the Fleet, an impressive 2-0 win when a patched-up Shots team under Gary Waddock took the points in September 2017. That’s a long period for a club that ruled the roost over us for many years in their previous Conference existence and they’ll eye this game as an opportunity to get more points on the board.

Last season’s corresponding fixture saw Fleet win 3-1, with two goals from Sean Shields and one from Andy Drury. From that game, only three players apiece from either side is likely to feature, one of those being Myles Weston who will play his 100th game for the club if selected.

The match is segregated so Aldershot fans should use the away turnstiles situated 150 yards to the left of the stadium entrance. Car-parking is available at Ebbsfleet International Car Park C for £3 and we would respectfully ask supporters not to block residences or businesses around the ground. There is also a risk of cars being ticketed on Thames Way (on the approach to the ground before the roundabout) so please avoid parking along that stretch of road.

Ed Miller has been Ebbsfleet United's communications manager and programme editor since 2014 and responsible for the club website since 2007. Contact him on ed.miller@eufc.co.uk
PrevPreviousFleet extend commercial partnership with Sykes Pumps
NextTwo new signings for the FleetNext