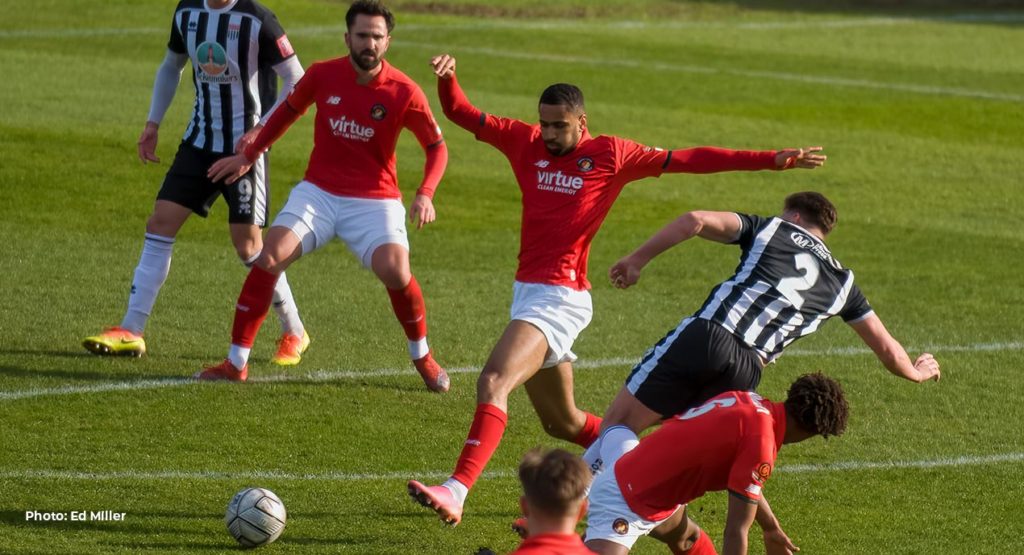 With successive clean sheets and 2-0 wins behind him, Dennis Kutrieb was impressed by “a real team performance” and the manner with which his side secured the points at Twerton Park.

“It was very impressive if I’m honest because it’s a tough place,” said the Fleet boss. “But not just [that it’s] a tough place, how we worked as a team and the workrate. The team performance was really outstanding today – it’s not like often in our games where we’ve had a good player here, a good player there, or an outstanding performance from a few players. Today was a great team performance and that’s of course what I like to see because from there we can build up many more [similar] situations for us.

“It’s not easy to play here up and down the hill. That we could get an early goal, that helped a lot and then in the second half we just needed to make sure we can score a second. Dom’s was a great goal there after good passing from Paxman and Lee Martin, everyone was involved. It was a good [shot] from Kieran and the goalkeeper made a good save and then Dom was there, so it was a great team goal. It’s the second time in a row where we were really careful and had the right mindset to defend together as a team. I didn’t see many games [previously] where we chased the opponent late in the second half, with the high intensity like we did today and that makes me proud.”

The second goal sealed the game but Ben Chapman’s early finish set Fleet on the road to victory. It was an odd goal, with the Fleet’s utility man picking himself up off the floor after being pushed in the back to beat the Bath defence to the ball.

“It didn’t matter [if there was a penalty] when the ball is in the back of the net,” said Kutrieb. “When you get a win you don’t talk about the referee! He’s a very young referee but I would say today it was one of the better performances and of course if you’ve got a win you don’t need to talk about referees or decisions because the most important thing is to get three points on the road and that’s what we have done.

“It was a great delivery [of a clean sheet] because I couldn’t see a big chance. They’re a strong team and it’s funny to say because they’re [towards the] bottom of the table but we said during the week we need to be careful, we need to be aware they’re a good team. They have a few boys who’ve scored a few goals and you could see their threat, they put us under pressure in the first half after we scored very early but the resilience of our team’s defensive work today, everyone was putting a big shift in.”

The Fleet boss introduced Poleon as substitute at half-time and it proved a masterstroke, with the top scorer’s 14th goal of the season also the 13th scored by a sub this season.

“He knows his quality and he’s not been happy about a few performances in the past, similar to me,” said Kutrieb of his chief goal-getter. “But he’s a great character and he will always work hard for the team because he wants to succeed like us and everyone else in the team. He would always put a big shift in and I said to him it doesn’t matter if you haven’t scored for a few games because if you do the honest hard work, you will get the reward. And that’s what he is doing at the moment, he’s doing the hard work for us and he gets the rewards. For a striker, it’s very easy: as long as he scores he’s happy so that’s an easy secret for every striker. When they score, they’re happy!”

It was the third match in a row the Fleet lost a player to injury, with Craig Tanner following Alfie Egan and Tobi Adebayo-Rowling on to the casualty list.

“There was a little bit of damage,” said Kutrieb of Tanner. “And [it was] a little bit of a precaution. Maybe he could have gone for a little bit longer but as we always do when there are a few little things, we make the substitution straight away because we have tough games. It’s still a long season to go and many games. Craig Tanner’s an important player like Raks and many others, Tobi out with a knee injury or Alfie Egan still but we have no time to moan because players get injured, other players come back. We definitely prepare everyone to be ready to play – as you could see Kieran today, he wasn’t playing the last games but an outstanding performance. Not just him, many others as well, but he came in the team and not had the same amount of minutes like others but still can put a great performance in. We need to have a look at Tanner if it’s more serious or not, hopefully not because we need everyone but we will see in a few days.”

“We play Oxford next week and as long as we get our points, we don’t need to look at others. It’s normal for this stage of the season [for strange results] but if I’m very honest, I don’t care at the moment because if we put our performances in we don’t need to be worried If we put our work in on a regular basis, week in, week out and do it a few weeks more, maybe I will have a look [at the table] again.”

Ed Miller has been Ebbsfleet United's communications manager and programme editor since 2014 and responsible for the club website since 2007. Contact him on ed.miller@eufc.co.uk
PrevPreviousBath City 0-2 Fleet
NextSolly “loving every minute” of itNext