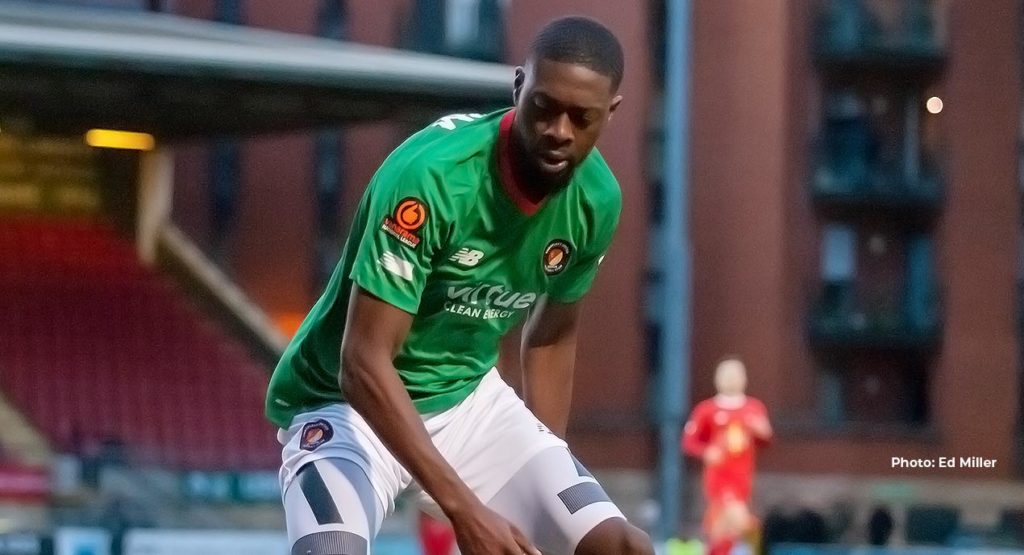 “A little bit cuter and we’d have got something”

Fine margins and all that – especially in cup ties – usually decide who wins and who loses and Fleet striker Rakish Bingham felt a little more “cuteness” in front of goal might have tipped the odds in his side’s favour.

Bingham, who was a Hartlepool player when he last set foot on the Breyer Group Stadium pitch five years ago, echoed his manager’s feelings that the early opportunities that came Fleet’s way needed just that little bit more composure.

“For all our good play I think maybe in the final third we could have been a little bit cuter with some decisions,” he told BBC Radio Kent’s Charles Webster. “Even the first first five minutes of the game, the chance where we broke 3v1 and tried to play Dom in, Dom tried to play Marts, it could have been a little bit more tidy. It was early on in the game but I think moments like that, especially against League clubs [are key]. When they get moments like that they take their chance so it’s a lesson for us but I’m proud of us as a team.”

And while Bingham felt the EFL team’s cutting edge in that one first-half moment ultimately proved the difference, he was adamant that the Fleet were more than a match for them across the 90 minutes.

“I could speak for everyone else out there, I don’t think we were fazed on the pitch,” he said. “We were confident, we played, we got the ball down and played our game. That’s how we play 95% of all our games in the league anyway so credit to us, we’ve gone out there and we stuck to our guns and unfortunately we came up short.

“These teams are in the League for a reason . You make mistakes, they will punish you and they had their one chance. They’ve hung onto that lead for the rest of the game and from then we came on leaps and bounds. We played some decent football but we dug deep and gave it our all.

“When I came off and I was on the bench, I thought we were still in it up until the last kick of the game. There was a chance with Westy’s free kick at the end as well but now it’s just to focus on the league, keep our form and take it game by game.”

Out of the cup, maybe, but it was a day that did the club and fans proud, says Bingham, who – though disappointed – believes it should be a springboard for the rest of the season.

“And credit to the fans coming out today, I think I heard them more than I heard the Orient fans. Incredible support and you feel it on the pitch as well so the effort we put in today with the fans as well, it was a good day out for them. It would have been better if we got a better result, even a draw to take them back, but that’s a league side and we’ve gone toe to toe.

“There’s still a lot to play for, still a lot to look forward to. It sounds like a cliché but we do take it game by game, I know every player says that but it’s the truth. You don’t get carried away. We’re in decent form but it’s still very early, we’re not even halfway through the season so we need to just keep building, take the momentum into each game and see where we can end up.”

Ed Miller has been Ebbsfleet United's communications manager and programme editor since 2014 and responsible for the club website since 2007. Contact him on ed.miller@eufc.co.uk
PrevPreviousImpressed, proud and disappointed
NextFleet boss wins monthly awardNext