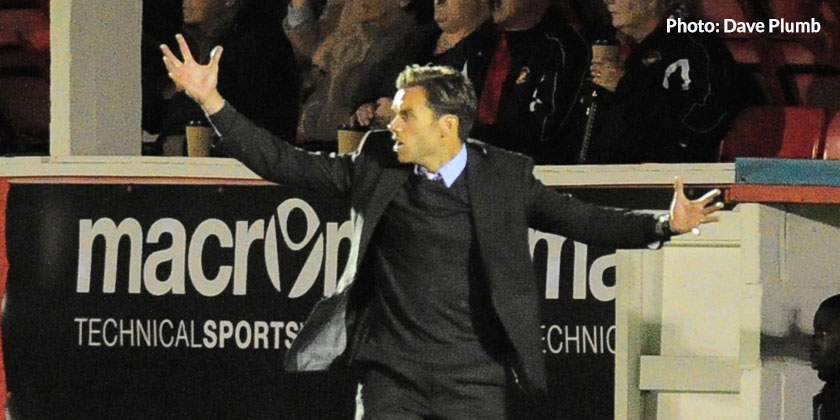 Daryl McMahon has refused to be drawn into knee-jerk panic measures off the back of Saturday’s home defeat to Wealdstone but admitted that a poor defensive display had cost his side at least a point.

McMahon told BBC Radio Kent, “I said to the boys in the changing room it doesn’t matter what way we dress it up, you can dress it up that the performance was good, but to concede three goals at home is poor, there’s no getting away from that.

“I said earlier in the week they’d come and try to counter-attack us and they did and we didn’t defend it well at all. We gifted them three goals. We were beaten too easily, we were diving in, not pressing the ball quick enough, not killing counterattacks quick enough, lots of little things that for me weren’t good enough. It’s frustrating to concede early but you’ve still got 87 minutes to go and win the game. We had plenty of the ball, plenty of chances again and not won but that happens in a season.

” I don’t expect us to turn up every week and win every game. There’ll be games that we will lose again but we’ve got to be strong and stick together to come through it. We’re top of the table and long may it continue.”

The Fleet boss rejected suggestions that his players were feeling any pressure, saying “We don’t feel the pressure of being leaders, we really don’t. We focus on our own performances. Our performance today with the ball was good; without it, it wasn’t anywhere near good enough and we’ve got to improve on that.

“I’ve got today and tomorrow to think about what we do on Monday morning. Today,  defensively we just weren’t good enough.”

Aside from the defensive frailties across 90 minutes, the manager felt his players once again created enough chances. “The midfield boys this season have been outstanding and they were again today. I just thought I’d give Jordan Parkes a break but JP Kissock was unbelievable again and his was a performance as good as any you’ll see at this level of football. He’s brave, he gets on the ball, he moves it quickly. Rancey does a job in front of the back four as well, I don’t think there’s anyone better at this level of football at doing that. Joe Howe put in plenty of crosses today, Matt Fish put in six great crosses in the first half, there’s plenty of balls gone into the box and we had plenty of chances to win today.”

With Fleet still top of the table, having breezed through August and September, McMahon is not letting a rocky October affect his approach. “It’s my job to find the answers and try and win games,” he said, “and so far we’ve done it more often than not. I believe in myself, in my squad and my staff but we’re not going to be panicking by any stretch of the imagination.”

Ed Miller has been Ebbsfleet United's communications manager and programme editor since 2014 and responsible for the club website since 2007. Contact him on ed.miller@eufc.co.uk
PrevPreviousFleet 2-3 Wealdstone
NextU21s to take on ReadingNext