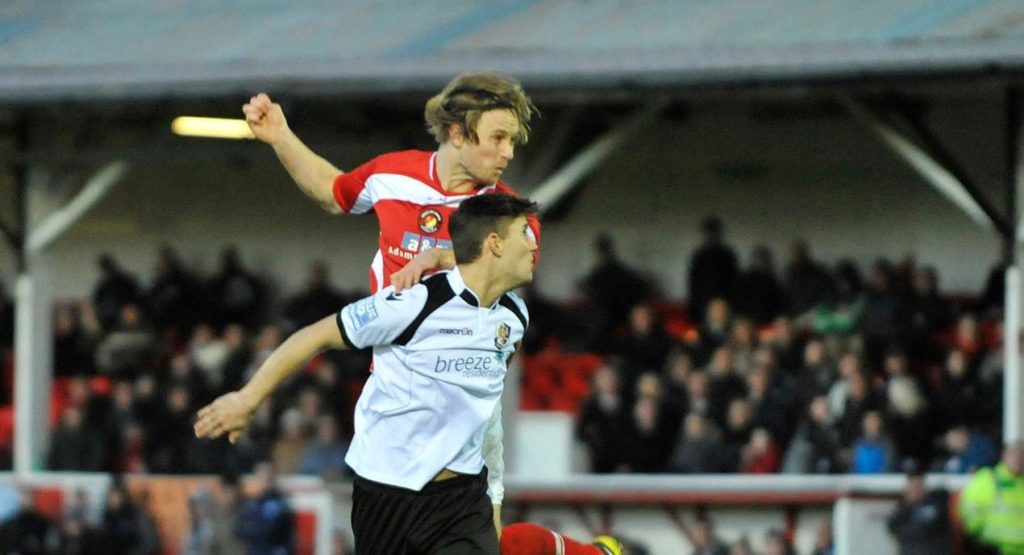 A tale as old as time… well, as old as the Fleet and Dartford have been around anyway. Our rivalry is one that predates the current club’s 1946 formation, with the Darts having been regular foes of Northfleet United since the late 19th century and regular visitors to Stonebridge Road since the early 20th.

We present 22 previous clashes between the Fleet and the Darts from down the years as we await the first game of 2022 – and the first Fleet-Dartford derby with fans since New Year’s Day 2017.

The first ever meeting of the clubs was a friendly, with Northfleet another season and a half away from competitive Kent League football. Dartford’s ground at Summers Meadow, Lowfield Street, was described as a bumpy swamp surrounded by water-filled ditches from which the ball had to be constantly retrieved. And in the days when the heavy ball easily retained water, it soon became almost impossible to kick it more than a few yards. The Darts fans were not described favourably either, the local correspondent – perhaps with a hint of bias given the scoreline – accusing them of being “uncouth louts who constantly abused the referee”.

Played at Northfleet’s Collins Meadow ground, this was the two clubs’ first FA Cup meeting. What was extraordinary about this was that the Fleet managed to erect a whole new 400-capacity stand on the morning of the game! The installation company came from Bermondsey and began work at 8.30am and just seven hours later had completed the stand as well as constructing (no doubt rudimentary!) changing rooms! A cracking 3-3 draw followed (goals by skipper Teddy Bundock, James Moody and Taylor) that meant a replay two days later at Dartford – Northfleet won that 3-2 with Bundock and Moody again on target.

Dartford’s first ever visit to Stonebridge Road came more than 115 years ago in this West Kent League fixture, Parker scoring the only goal in the first season of operation at the then brand new ground. It was a fairly meaningless fixture, with both sides locked in mid-table and some way behind champions Eltham.

As the First Battle of Ypres was launched along the Western Front just across the English Channel, the Fleet and the Darts were still playing football! Ever since war had broken out in the late summer of 1914, the football authorities had been weighing their initial desire to continue playing alongside the greater national interest. The Kent League season was set to go ahead but local papers declared they would not report on any results, such was the trivial nature of football given the escalating conflict. The Fleet progressed in the FA Cup, beating Cray Wanderers and needing three games to get past Sittingbourne, before this trip to Dartford in the Second Qualifying Round. Northfleet scored the opener but Dartford eventually stretched into a 4-2 lead before a late Fleet consolation. The crowd of 1,200 would not see another such game for quite some time – Dartford’s tie with Chatham in the next round would never take place and Fleet chairman Joe Lingham shut the club down, writing: “It is evident that the manhood of our country will be required for services against the enemy. It is generally felt that it is not the time to play games.” Fleet’s two scorers in that last game both joined the Army that month – Beldham served in the Norfolk Regiment and Arthur Seccombe in the Royal Artillery – he lost his brother and fellow Northfleet teammate Henry, killed at the Battle of Passchendaele in 1917.

A crowd of 8,000 packed into Maidstone’s ground as the two North Kent clubs reached the Kent Senior Cup Final. Ted Goldsmith’s sixth-minute goal gave the Fleet the Trophy, our first of five consecutive triumphs in that competition – still a record to this day. It was a hugely successful decade for the Fleet, who also won two Kent League titles, were runners-up twice, returned to the Southern League and finished below Dartford only once in 10 years.

Just as Northfleet went into hibernation at the outset of the First World War against Dartford, so history repeated itself as the Second World War began. The scoreline was even the same – 4-3 – though this time in the Fleet’s favour as Syd Roberts, Jack Browne, future Spurs League winner Les Bennett, and Simpson were all on target for the visitors in this Kent League match. The game was played the day after Germany invaded Poland and the day before Neville Chamberlain declared war – and once again it was left to former player and chairman Joe Lingham to lock the gates at Stonebridge Road. The Kent League resumed later that year but Lingham declined the offer to rejoin – he died in 1943 and the club went with him, Northfleet United never to resume.

The first meeting of the current incarnation of the Fleet and the Darts came just 12 days after the new Gravesend & Northfleet had kicked-off. A crowd of 4,320 watched the reds demolish Dartford in the Kent Senior Shield, future Darts player Len Wakeman scoring twice alongside Ron Palmer and an own goal. The two clubs met five times that season, including the first festive fixtures, with two wins apiece (a 5-0 for the Fleet and a 6-0 for Dartford amongst them!) and a draw. (Click below to continue)

Ed Miller has been Ebbsfleet United's communications manager and programme editor since 2014 and responsible for the club website since 2007. Contact him on ed.miller@eufc.co.uk
PrevPreviousDartford derby tickets + New Year opening times
NextPreview: should auld acquaintance be forgotNext